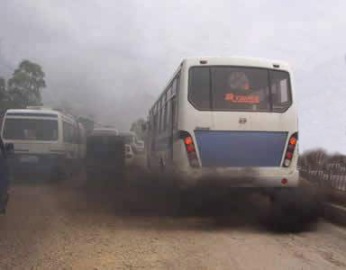 This is what it has come to: The air in LA is so toxic that a child born in the city of angels will inhale more cancer-causing pollutants in the first two weeks of life than the EPA considers safe for a lifetime.

This risk never goes away. It comes with the first breaths a child takes. Being born in urban California now means that life expectancy is reduced, chances of getting cancer are elevated. All this before you’ve inflicted any damage on yourself through smoking, drinking booze, eating fast food or watching CNN.

The situation is spelled out in a report released by the National Environmental Trust titled “Toxic Beginnings.” The report pins much of the blame for this situation on so-called TACs, or Toxic Air Contaminants. These are poisons spewed into the atmosphere from cars, trucks, heavy equipment and factories. Studies by the EPA and other agencies link TAC-exposure to cancer, birth defects and other illnesses, such as asthma.

In Los Angeles the air is so clotted with 10 cancer-causing chemicals that residents there face a cancer risk 1,005 times the level considered “safe” by the EPA. And the most vulnerable to those risks are children, especially poor and working-class children.

Prior to the National Environmental Trust report, the unique risks faced by children have rarely been deemed worthy of calculation. The EPA and the California Air Resources Board, for example, issue an annual report on air emissions and their consequences on human health. However, those risks are based solely on calculations made about the amount of carcinogens inhaled over the lifetime of an average adult.

But recent medical literature shows that children are much more susceptible to these toxins than adults, and that exposure to toxic air early in life is much more dangerous than breathing the same foul air for more extended periods as an adult.

This has to do with the physiology of children. They inhale more air than adults relative to their body weight. Thus, they are exposed to higher concentrations of cancer-causing chemicals.

The National Environmental Trust report took the data on TACs compiled by the Air Review Board and recalculated it to show the risks to children. It’s not a pretty picture. The EPA – rather arbitrarily – sets a “one million standard” risk of getting cancer as its acceptable lifetime exposure risk. Children born and raised in these smog-laden California basins will far exceed these levels very early in life.

In San Francisco the average infant will exceed the EPA’s lifetime exposure to toxic air pollutants in 19 days. In LA, it takes only 12 days.

Generally, these risks accumulate steadily, leading to cancers in adulthood. But there’s also evidence that exposure to toxic air is behind the mounting level of childhood cancers. “There has been a steady moderate increase in childhood cancers (ages 0-20) since the 1970s, which has not been explained by improved diagnostics,” cautions a recent report by the California Office of Environmental Health Hazard Assessment. “Leukemias, lymphomas and brain tumors are the most common childhood cancers.”

The biggest culprit by far is particulate matter and chemicals belched out by diesel engines from trucks, cars and “other mobile sources,” such as farm and construction equipment.

Sue Martinez works at the Children’s Hospital in Oakland and is a witness to the daily toll. “Diesel is the worst of the air pollutants, which our medical staff already sees through asthma cases,” Martinez told me. “In West Oakland, diesel trucks line up at the Oakland ports from Saturday night through Sunday with their engines idling. By the time the ports open for business on Monday, our Emergency Department has begun receiving asthma emergencies. Asthma is the number one cause of emergency department admissions at our hospital.”

But there are other sources as well, including dichlorobenzene (largely from pesticides), benzene (from oils and industrial greases), methylene chloride (from paint and paint removers) and formaldehyde (from adhesives and cleaning products).

The situation is so bad that even adults who have moved to California are not immune. In fact, the report reveals that, within a year, an adult breathing the air in one of California’s major cities will exceed the lifetime exposure risk by more than a multiple of 15. Even if the diesel emissions were brought under control, exposure to current levels of these chemicals would cause a child to exceed the EPA’s acceptable cancer risk by age 4.

At a time when Bush was railing at Saddam Hussein for gassing his own people, his administration was coddling the coterie of oil and chemical companies turning the LA basin into a cancerous sink and poisoning infants and children across urban America. And instead of strengthening the Clean Act Air to deal with this homegrown problem, Bush and his cronies from Big Oil want to rip out the few teeth that remain in the law, a move that will make cancer a birthmark of being born in California.

Jeffrey St. Clair is the author of “Been Brown So Long It Looked Like Green to Me: the Politics of Nature” and “Grand Theft Pentagon.” His newest book, “Born Under a Bad Sky,” from which this essay is adapted, is just out from AK Press / CounterPunch Books. He can be reached at sitka@comcast.net. This story first appeared in CounterPunch.