by Leon A. Waters 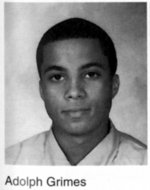 The New Orleans police have murdered another African American youth. Around 3 a.m. Friday morning, Jan. 1, New Year’s Day, an elite squad of un-named plainclothes officers shot and killed 22-year-old Adolph Grimes III. Grimes was waiting in his car, parked outside his grandmother’s house, for his cousin when he was assaulted by the police.

When an independent examination was done on the scene of the crime – the 1700 block of Governor Nichols Street and not the 1600 block as alleged by the police and the media – the examination disclosed that the shooting could not have happened the way the authorities claimed.

Several tales have emerged from the NOPD and the coroner’s office as to the “facts” of what happened. Police Chief Warren Riley has a tale. The un-named police officers have a different tale. Coroner Frank Minyard has his tale.

All of these tales are designed to demonize young Adolph Grimes III. These tales are to suggest that Adolph was a “thug,” that he was probably doing something illegal, and that the police were justified in killing him.

The standard line that the young man “fired at officers,” resulting in officers having been “forced” to kill the suspect is being repeated. [Orleans Parish Coroner Frank Minyard has said Grimes was hit 14 times, with 12 of the bullets striking him from behind.] This, of course, is a lie – a lie repeated endlessly by the bourgeois media acting as spokespersons for the police.

The state, led by Chief Warren Riley, claims a complete and thorough investigation will be conducted. But how can that be?

How can the wolves with blood all around their mouth conduct a genuine and honest investigation of the slaughter of the chicken?

Enough is enough! Let us all join together and combat this police terror and protest this savage murder of Adolph Grimes III. Join us in our protest. On your jobs, in your school and in your neighborhoods, rally your co-workers, neighbors and friends to join with you in protest. We must demand justice for Adolph Grimes and all victims of police murder.

Leon A. Waters can be reached at leonawaters8@gmail.com.

NOLA vs. the po-po