by Kambale Musavuli and Maurice Carney 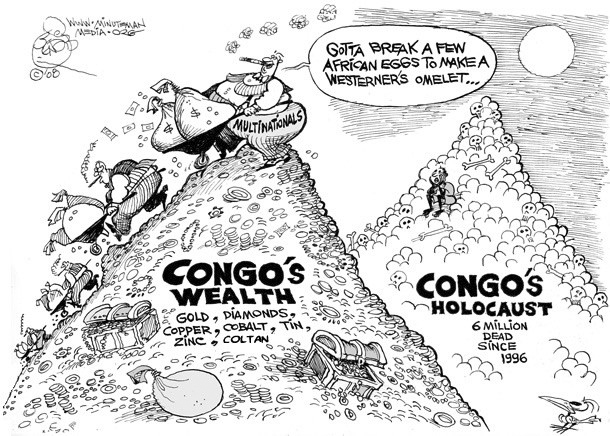 2008 marked the 100-year anniversary of the removal of the Congo from King Leopold II of Belgium as his own personal property. Global outrage at the King’s brutal rule resulted in his losing the Congo treasure trove on Nov. 15, 1908.

Leopold II accumulated spectacular wealth for himself and the Belgian state during his 23-year dominion (1885-1908) over the Congo. During this period, an estimated 10 million Congolese lost their lives while Leopold systematically looted the Congo of its rubber and ivory riches. Congo was then handed over to Belgium, which ruled as a colonial power from 1908 to 1960.

Congo finally got its independence on June 30, 1960, when Patrice Emery Lumumba, its first democratically elected prime minister took office. Unfortunately, the Western powers, primarily the United States and Belgium, could not allow a fiercely independent African to consolidate his power over such a geo-strategic prize as the Congo. Lumumba was removed from power in a Western-backed coup within weeks and assassinated on Jan. 17, 1961.

Belgium apologized for its role in Lumumba’s assassination in 2002, yet the U.S. still downplays its role in murdering this great young leader. The U.S. replaced Lumumba with the dictator Mobutu Sese Seko and backed him until he was overthrown in 1997.

The overthrow of Mobutu unleashed an ongoing resource war that has caused deep strife and unbearable suffering for the Congolese people, particularly the women and the children. It is estimated that nearly 6 million Congolese have been killed since the 1996 invasion by Rwanda and Uganda with support from the United States and other Western nations.

A century later, Congo is at another crossroads. In spite of the advances in technology and the shrinking of the world, it is curious that there is such silence around the suffering of the Congolese people due to the exploitation of powerful corporate and foreign forces beyond its people’s immediate control. Unlike the early 1900s, remarkably, today there are few if any voices the likes of Mark Twain, who wrote “King Leopold’s Soliloquy,” Joseph Conrad, “The Heart of Darkness” (often misread as Congo or Africa being dark, but he was referring to the dark hearts of the exploiters of the Congo), and Sir Arthur Conan Doyle of Sherlock Holmes fame, who wrote “Crime in the Congo.”

The Congo Reform movement that drew from the work of African Americans such as William Sheppard and George Washington Williams and led by European figures such as Robert Casement and E.D. Morel gave birth to the modern international human rights movement.

One hundred years later we are again calling on the global community to be at the side of the Congolese. This time, there is one fundamental difference: The Congolese are agents in this narrative and the call this time is not for a handover to a colonial power or neo-colonial institutions but rather to the people of the Congo.

The clarion call is for combating the forces – local elites and rebels, foreign governments, foreign corporations and multi-lateral institutions – that have the Congolese people in a death trap. The charity prism of the humanitarian industry is not the answer. It only perpetuates dependency and dis-empowerment.

Should Congo be truly liberated, the Darfurizaton (emptying of agency from the afflicted people) of the global movement in support of the Congo must be avoided at all costs. Congolese must be agents rather than objects in the pursuit of the control of their land and their lives.

The sovereignty of the people and control and ownership of the riches of their land is the fundamental human right for which we must advocate. It is a call not only for the Congo but the entire African continent.

Become a part of the global movement to “Break the Silence” as the Congolese pursue true sovereignty and liberty.