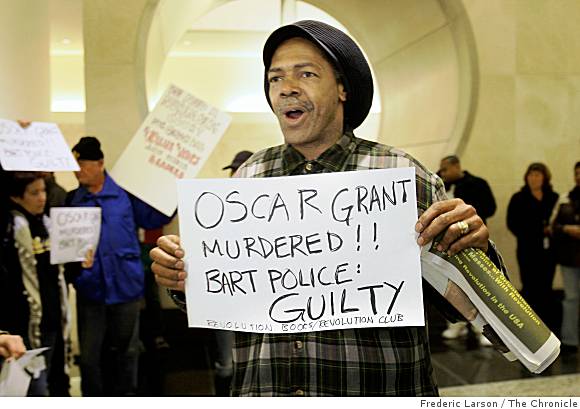 Just as in war, in extrajudicial killings, truth is the first casualty.

We cannot expect to receive any reports except those that justify, excuse or minimize the killing of Oscar Grant by BART police at 2 a.m. New Year’s Day. It begins with the first report of an “officer-involved shooting”: a term that serves to evade the issue of circumvention of justice and remove the shocking lethality, while assigning the killer a passive role – reduced to merely being “involved” in some unstated way.

The Oakland Tribune story “Man dies in BART officer-involved shooting” is a perfect example. The report completely removes the killer from the killing and shifts responsibility to a mischievous little self-willed, but incontinent, gun: “an officer’s gun discharged, wounding Grant.”

Now the San Francisco Chronicle provides an example of journalism sacrificed in service of police deception: “One source familiar with the investigation said BART is looking into a number of things, including whether the officer had meant to fire his Taser stun gun rather than his firearm.”

The Taser excuse is so preposterous that the source preferred to remain anonymous. Why is the Chronicle printing unaccountable rumors? Yet the article begins with the official BART statement: “BART’s police chief asked for patience from the public today after video footage surfaced showing one of his officers fatally shooting an unarmed man … he found the footage to be inconclusive.”

So, officially, we should wait for the police investigation, and not believe our lying eyes. Yet, unofficially, police anonymously spread disinformation that would have us believe that it was something less than the murder we see in several witnesses’ videos.

You would think that if the policeman actually meant to fire his Taser, he would have immediately admitted that mistake to clear himself from a murder charge. Why would the investigation need to be “looking into” that possibility? I try in vain to envision the policeman sweating under the glare of an intense interrogation about the killing, when the interrogator asks, “Officer, is it possible that you might have mistaken your Glock for a Taser?” I’m sure the killer cop would fall out of his seat laughing.

Why is the Taser excuse absurd?

1. The manual states that the Taser X26 weighs 7 ounces. Depending on model and bullets loaded, a Glock pistol can weigh from 25-38 ounces. You don’t have to be a weapons expert to feel the difference between holding about two pounds and holding less than half a pound – try it.

2. Police pistols are all black, sometimes with a very dark brown grip. The X26 has bright yellow markings on it. It also has a 2-digit LED display.

3. The X26 has a safety on the grip that must be released. The Glock safety is on the trigger.

So let’s review the minimum steps of a Taser deployment:

1. You pull out the lightweight, brightly colored weapon. You load the cartridge onto the tip of the barrel. The cartridge is fat and rectangular, looking nothing like a pistol barrel.

2. You reach on the grip and flip the safety up. The LED display lights up like half of your digital alarm clock, then shows the percentage charge.

3. Police are taught NEVER to use Tasers in life-threatening situations (ensuring that the “Tasers save lives” mantra remains a fairy tale). So, since that eliminates the “split-second judgment” defense, every Taser policy I’ve seen requires a warning before firing, to give the victim the opportunity to comply. Police like to report that merely pointing the Taser and issuing the warning is often sufficient.

To accept that the killer went through these steps without realizing he actually had in his hands a heavy, dark pistol – with no LED display and no cartridge loaded or to be loaded – requires the kind of suspension of belief we’ve not been asked to make since “Plan 9 from Outer Space” hit the screens.

Most likely, this cockamamie rumor is spread by the police in order to buy time. It’s damage control, to pacify an angry public until they can come up with some way to blame the victim.

“Don Cameron, a former BART police sergeant and weapons expert who now teaches police officers about proper use of force, said Monday that he had watched footage of Grant’s death and was convinced that the officer had meant to fire a Taser … Cameron said he made his conclusion based in part on the officer’s stance, and the fact that a second officer moved away from Grant just before he was shot, perhaps trying to avoid a second-hand shock.”

Is there any end to the fictions we’re asked to believe? Everyone knows Tasers do not give “second-hand shock,” because we’ve all seen those jive jolt sessions where police hold a reporter as the reporter gets a sample shock from a Taser. We also watched police piled on University of Florida student Andrew Meyer after he questioned Sen. John Kerry at a campus forum. None moved away before, or while, Meyer was Tasered. On the other hand, stepping away from someone pointing a Glock requires no explanation.

The Taser-confusion rumor is now posted on Police One, a law enforcement website where “You must be a confirmed law enforcement member of PoliceOne to post a comment. The comments below are member-generated ….”

Standing apart from the expected boo-hoos for the “devastated” killer is one skeptic, arguing along the same lines I argued:

“I have a hard time understanding how one could mistake a firearm for a Taser, even in a high stress situation. The reason being that even though the Taser may draw and feel similar to a firearm, one has to turn it on. What about the motor skills learned of flicking the switch to turn the Taser’s power on? Would that particular motor skill go out the window during high stress? It seems to me that if one pulled out their firearm, meaning to pull out their Taser, one would wonder where the power switch had gone to when they attempted to turn it on. Should that not tell the mind that there is something not right with ‘this Taser’?”

There have been at least three shootings where police claim to have mistaken their Glock for a Taser. The most recent I know of was in 2002 in Madera, where Marcy Noriega killed amateur boxer Everado Torres after he was arrested – following a loud party complaint – and handcuffed in the back of a squad car. Noriega was armed with the older and heavier Taser M26 (19.2 ounces). Madera police did not have their Tasers marked with yellow tape; they only added it after the killing. The M26 has a simple LED, with no digital display. But the Taser holster was on the thigh, while the Glock was on the hip.

No criminal charges were brought against Noriega. The federal district court dismissed the family’s civil suit in 2005, but in May 2008 the appeals court ordered the district court to decide if Noriega acted unreasonably.

Junya is an activist and writer living in Palo Alto. He can be reached at junya@idiom.com. 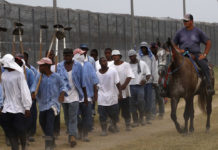 UN Human Rights Committee finds US in violation on 25 counts