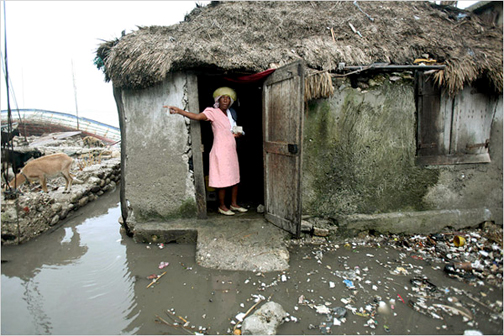 The issues for development of the Southern Hemispheric nations are very similar. As in Africa, Haiti has been ravaged by neocolonialism and its attendant power grabs through the tools of endless debt to the former colonial powers, their plundering of resources, and unfair trade that promotes famine and dependency. The U.S. Congress and new U.S. president should support the institutionalization of the rule of law, human rights, workers’ rights and food sovereignty and stop supporting global corporate interests that promote coups d’etat, instability, financial colonialism and containment-in-poverty. Ideology of all sorts, including “democracy,” “neo-liberalism,” “free trade,” “globalization” and all such “privatization” schemes ought not to be more important than the welfare of humanity, peaceful co-existence, environmental protection and the future survival of humanity and Planet Earth.

Haitian-Americans are working for change on the following priorities and urge President Obama and the new U.S. Congress to incorporate them into a more effective foreign policy that centers on promoting sustainable development, self-sufficiency, and a sovereign, prosperous and stable Haiti.

Stop the United States’ unequal immigration treatment of Haitian refugees, grant Temporary Protected Status (TPS) and work permits to Haitian nationals in the U.S. with a specification to stop all deportations until Haiti has recovered from the ravages of hurricanes, floods and instability. Haitians in the United States should receive equal treatment and protection under all the immigration laws. Four tropical storms and hurricanes battered Haiti during last year’s harvest season, killing almost 1,000 people nationwide, decimating Haiti’s agriculture and causing $1 billion in damage to irrigation, bridges and roads. Haiti qualifies for Temporary Protected Status and should be granted this disaster relief.

But the U.S. has never granted Haitians TPS, which permits short-term residency to nationals from countries that are enduring political or environmental turbulence. In 2002 the Bush administration renewed TPS for Nicaraguan and Honduran immigrants owing to Hurricane Mitch in 1998. At this point, Haiti is in much worse shape than Central Americans were at the time. The damage in Haiti is worse than three times the damage left after Hurricane Katrina in New Orleans. In Haiti, mudslides still cover entire towns. Houses are flooded. Schools have collapsed on children and people are starving. It’s inhumane to deport Haitians back to Haiti under these devastating conditions, where they will find no home, no employment, no food, no personal safety and security.

The U.N. troops in Haiti are paid $601.58 million per year and have been in Haiti for four years. That is $50.13 million per month, $1.64 million per day. Yet, during the recent floods and hurricane season in Haiti, the Haitian president had to call for help from the international community. Wasn’t that help already in Haiti, to the tune of 9,000 U.N. – MINUSTAH – troops already cashing in $1.64 million per day? Why are they there, if incapable of providing emergency help? If they had not one amphibious unit or temporary bridge, no caravan of trucks or equipment to reach Haitians in distress, what use are they to the people of Haiti? Are their war tanks, heavy artillery, guns and military presence in Haiti making Haitians more secure, more safe, more free, more prosperous, better nourished, educated and healthier than before they landed four years ago? No.

3. Cancel immediately and without conditions all Haiti debt to international financial institutions, including old Duvalier-dictatorship debts

Haiti is suffering famine, the repercussions of the 2004 U.S.-supported coup d’etat and the ravages of the greatest natural disaster in remembered history, three times greater than the Katrina damage. Yet, instead of using its resources to provide relief for its people, Haiti is forced to pay out in excess of $1 million per month to foreign banks.

Stop failed policies and trading through the U.S. Agency for International Development (U.S.AID), churches and predator NGOs. A great portion of food aid from such entities does not reach the intended beneficiaries in Haiti and instead ends up for sale in the marketplace. Start fair trading with Haiti and supporting grassroots, indigenous Haiti capacity building organizations. U.S. AID denies Haitian sovereignty and progress by blocking, declining and subverting any direct assistance to empower the Haitian government while engineering so that the majority of Haiti’s national budget – provided by the international community as a consequence of the 2004 Bush-U.S.AID regime change – is currently managed by its approved non-governmental organizations. For instance, some 800 NGOs control part of the budget, thoroughly undermining the state’s ability to deal with the famine and food crisis.

Direct that the U.S. re-orientate its resource allocation to Haiti to trade with the Haitian government, not, in effect, with U.S.AID, foreign NGOs, churches and charities in the name of Haitians. For this U.S. foreign policy effectively forms a shadow government enchaining Haiti that undermines Haiti’s sovereignty, emboldens and empowers NGOs with no public responsibility or accountability to Haitians or Haiti’s long term well-being.

It is in the best interest of the United States to directly support Haitian democracy, good governance, development, self-reliance and self-sufficiency. This cannot be done if the Haitian government has to compete with foreign funded NGOs and charities that are not elected or accountable to the people of Haiti, but are predatory and promoting dependency and their own organizations’ interests for self-perpetuation in Haiti.

To effectively support grassroots, indigenous Haiti capacity building organizations, the U.S. Congress must demand greater fiscal accountability, transparency and quantifiable evidence of sustainable development achievements, from reform projects designed, supervised and financed through U.S.AID and their subcontractors, corporate consultants and charity workers using federal funds in Haiti. And, in particular, these new Haiti foreign assistance guidelines should ensure that food and other aid actually reaches its intended beneficiaries and does not end up for sale in the open market or stay in Washington or be used in Haiti mostly on administrative salaries, fees and expenses for U.S.AID’s political benefactors, shipping companies and nonprofits.

Stop grossly unfair free trade deals and ineffective initiatives such as the Caribbean Basin Initiative Investment Support (OPIC) or the Special Export Zones (SEZ) under the Hope Act, which bans trade unions to protect workers’ rights, or other such agreements – pummeling, bullying and beating Haiti into the dust of misery, debt and poverty. And, instead, support Haitian food production and domestic manufacturing, job creation, public works projects, sustainable development and a good working culture that values human rights. After the storm emergency, calibrate food aid so to assist and not further destroy Haiti’s food production.

Support post storm rebuilding and reconstruction of environmentally degraded areas. Invest in Haitian-led projects to built flood barriers and better drainage as in La Gonave; support food sovereignty, energy and reforestation, such as planting of fruit trees for food, capital building and trade and use of indigenous Haiti plants, such as Jatropha, for biofuel energy. In the process of providing crisis assistance, the U.S. must promote Haitian self-reliance wherever possible instead of the cycle of dependency. For instance, instead of water purification tablets, add also, whenever possible, the more long term and permanent bio-sand filters apparatus that will last forever and purify toxic water on a continual, not just a one-time basis.

6. Support the institutionalization of the rule of law

The new U.S. Congress and president should support the institutionalization of Haitian laws, not “democracy enhancement” projects through U.S. AID, IRI or NED that promote coups d’etat, instability and financial colonialism and containment-in-poverty in Haiti through neo-liberalism – “free trade,” “globalization” and other such “privatization” schemes.

Every time the United States supports the destabilization of a duly elected government, it visits enormous economic pressures and political turmoil upon Haiti. The turmoil and pressures undermine Haitian justice, participatory democracy, self sufficiency, sovereignty and self-determination and promote insecurity, debt, dependency, foreign domination, injustice, a rise in fleeing refugees and a structural containment-in-poverty. This instability has widespread and deep and disturbing repercussions. It keeps Haiti underdeveloped, dependent and contained-in-poverty.

The Haitian Diaspora invests $2 billion per year in Haiti. That investment is destroyed, diluted and undermined when it must be used to bury family members killed in political turmoil or kidnapped in the chaos of anarchy and instability that follows coups d’etat or to move and help rebuild the family of a relative or friend traumatized by the U.N. soldiers’ rapes, molestation, arbitrary detention and indefinite incarcerations of their children, relatives and friends in Haiti. Instead, families should be able to use those funds to buy books for their children and relatives to go to school, supplies to carry out a viable family business or seeds to plant next year’s harvest, or to invest remittances in Haiti’s tourism, schools, reforestation, agriculture, road construction, flood barriers, communication, energy, sanitation or health needs. Moreover, when the U.S. deports an income earner to storm-ravaged and starving Haiti, this decreases remittances and further impoverishes family members who depended on the remittances from family members abroad. Diaspora remittances are the most effective and direct aid to the Haitian poor in Haiti.

The Obama candidacy promised change and a return to the rule of law and diplomacy as opposed to U.S. pre-emptive strikes, war, terror and torture to attain perceived U.S. foreign policy interests in the world. Candidate Obama promised human rights, workers’ rights, environmental protection and reciprocal trade. To grant Haitians TPS, end the U.N. military occupation, assist Haiti with poverty reduction, domestic agricultural investments and community policing, and cancel unfair debt to international financial institutions – all those initiatives would support stability and participatory democracy, stop the flow of refugees and illegal immigration and meet the policy interests of the United States.

For further information, see the complete policy statement at “What Haitian Americans Ask of the New U.S. Congress and President.”

Venezuela: a threat to Washington?

Famine in the Horn of Africa

Toward African freedom in Libya and beyond