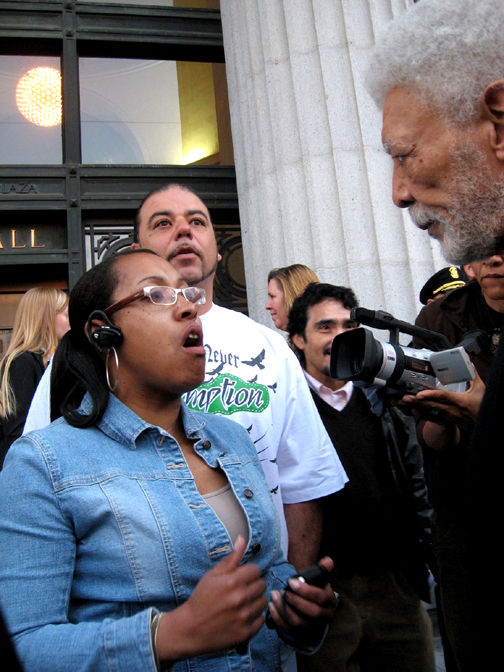 I’d just arrived home from New Orleans last week on Jan. 7 and was too sleepy to attend the first mass action protesting the execution of Oscar Grant, but a week later, Jan. 14, the first day of classes on Peralta campuses where I work, I decided to attend, to show my support for the Grant family and other families who have lost sons and brothers, sisters and daughters to police violence.

The BART policeman who pulled the trigger and murdered 22-year-old Oscar Grant had been arrested in Nevada on Jan. 13, so the mood Wednesday afternoon wasn’t as tense. Nevertheless, justice was still not guaranteed, even though a win in Oakland for the people could mean a win for the people in New Orleans, where Adolph Grimes III was also gunned downed by multiple police New Year’s Day.

The police were doing their usual overkill: swat teams with masks on corners bordering 14th Street and Madison, Franklin, Oak and other intersections. Either their cars blocked traffic or cops on bikes and those standing blocked the side streets between 14th Street and 13th Street. Cars were diverted as helicopters circled above. One policeman didn’t want to let me walk up to the rally from Alice and 13th Street where I’d parked. He kept telling me the rally was over and that the march was coming down 14th. After he saw I still planned to go to the rally, he asked me if I lived in the neighborhood.

I was like … what is your problem. That sistah nonverbal crazy look. The guy moved and let me pass.

As I walked up 14th Street, seeing lots of folks I knew. They were directing people traffic and telling the grown folks – of which I am one now that I am 50 – to grab a kid and take him home after the rally and march were over. I saw a former students who remembered me from Laney College, kids who told me they were on track. I was happy to hear it. I hope they weren’t around later on when kids started breaking windows on businesses along Broadway near 14th Street. I no longer found them when I looked around at dusk.

Baba Greg Hodge was telling people how the march was to proceed by the time I made it. My attention was taken, however, by Mayor Dellums, who was in a deep conversation on the steps of City Hall with Tracie Cooper, the mother of one of the BART victims New Year’s Day, Michael Greer. Michael witnessed the killing of his friend, Oscar Grant III, as he was also detained, arrested, taken to jail and later released.

Dellums said he was hopeful, and with the arrest of the BART policeman, justice would be served. He said he’d been around so long he’d seen the scenario we were facing many times and, in this moment of heartache, injustice too would pass. He recalled out loud the celebration just a few months ago on these same streets, in front of City Hall, maybe patrolled by many of the same police, on the occasion of Obama’s victory. He said now was not the time to lose hope, that just as King hoped one day for an America where character and skills, not skin color, would determine one’s ability to rise to whatever station one desired, we needed to trust the system to work in the case of Oscar Grant III.

Now what I wrote is not what he said, not exactly, but it sounds good, doesn’t it? I even believe this interpretation might have been his intention. I’m not absolutely certain, and perhaps the video of the interview will get posted on YouTube. There were tape recorders and a camera in his face.

I truly love Dellums for his public service, but I think he is tired now and completely ineffective. I’ll probably never say this to his face unless asked and why would anyone ask me such a question, especially him? This is one of the reasons I have tried to stay out of his face, just in case.

I was so stunned as he spoke, when I found myself recalling his exact statements years ago when he spoke about the Civil Rights Movement and his social justice work at a Vanguard Public Foundation event honoring an Indian South African activist, then later at the seventh annual Martin King Musical Tribute. I heard these same words again and again at his campaign talks once he decided to run for mayor.

These sentiments were echoed at Chauncey Bailey’s funeral too. This is when the mayor decided to look to law enforcement as a model for healing the community in 2007, highway patrol officers enlisted to assist in solving the war on Oakland streets. Today, we are still at war, our youth the casualties of this war.

As I listened to Mayor Dellums, I was like wow. I don’t see the man for almost a year and the first time I hear him speak, it’s a rerun. But I think he’s sincere, even if ineffective.

I saw Tarika Lewis and Geoffrey Pete and Angela and Fania Davis and Mark Cary and Joyce Gordon, whose gallery has a lovely exhibit featuring the work of Ben Hazard. I ran by Marvin X and Arthur Monroe as I headed out for the courthouse – the march had left me. Donte gave me a hand up so I could stand on a wall and take pictures of the crowd at the courthouse.

It was clear the youth weren’t ready for the rally to end. They had a lot of energy left and nowhere positive to vent it. Organizers should have anticipated this and arranged for a poetry event, a debriefing discussion to plan next steps, a basketball game, pool, billiards, foods, music and then rides home.

These kids are the ones affected and the strategies employed didn’t include their voices, although I’m sure this wasn’t the intent. Volunteers in orange vests held hands to contain the crowd, to keep people safe from police, but when I looked down Broadway, I didn’t see many volunteers once the main stage was empty.

Even if I don’t condone the actions or agree with them, I understand why the kids were running after the march ended and why they milled around after the “official” assembly was over.

I can imagine the rush the kids felt as the objects tossed at the large panes of glass shattered along the commercial strip. The kids weren’t concerned with consequences, just release from the anger, frustration and fear that defines their daily lives. Expecting they may get shot today or tomorrow – life is that uncertain for Oakland youth.

The statistics have increased for murder of young Black men, and for those who are still alive, they probably figure their days are numbered if they are between the ages of 16-25.

Tracie Cooper’s son, Michael Greer, is a victim also, his life scarred by the absence of his friend, Oscar Grant III. When one thinks about post traumatic stress, the impact of violence on Black youth, Black men and the Black community, one sees that public outcry is rarely evident when a Black youth is killed.

It is as if these victims are somehow innately prepared for the environmental and psychological impact of these unexpected and tragic intrusions on their lives. The Black victims are left to cope alone and fail.