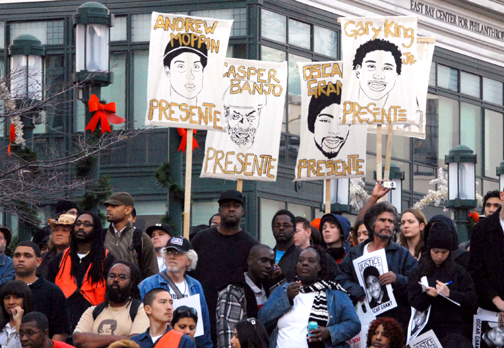 Oakland – Political remedies to hold police more accountable for outrageous acts such as the shooting death of an African-American youth here on New Year’s Day have been blocked by even supposedly “sympathetic” Democratic Party politicians, charged Green Party of California spokespeople Friday.

Greens said the killing of 22-year-old Oscar Grant by Oakland police should spark a renewed interest in police misconduct, transparency and accountability.

Ma was a member of the 2007 Assembly Public Safety Committee, which refused to even bring to a vote two pieces of legislation, SB 1019 and AB 1648, which would have given the public access to police records about misconduct and discipline involving police officers, including excessive force, officer-involved shootings and dishonesty.

“Another young man of color is dead. So much for change we can believe in and an end to a practice of allowing law enforcement officials to act as a protected class. Supposedly ‘progressive’ Oakland Mayor Ron Dellums and the District Attorney, both Democrats, have not done what needs to be done,” added McDonald.

“Public access to police records about sustained police misconduct not only protects the public by helping deter police misconduct, but it generates public confidence in the police by holding police accountable,” said Cres Vellucci, Green Party spokesperson and member of the ACLU Board of Directors in Sacramento.

Prior to a relatively recent court decision, there was access to some discipline records of police with virtually no problems regarding the rights of police officers. Now police are protected from any real disclosure of discipline problems.

Creating wealth in our communities