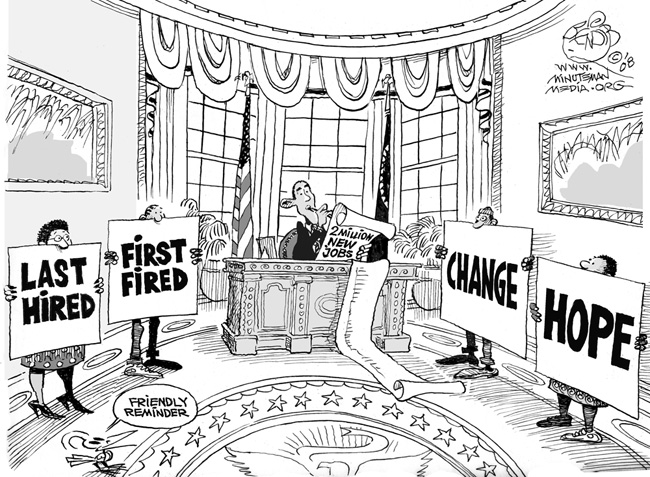 In this year’s report for Martin Luther King Jr. Day, released on his 80th birthday, Jan. 15, 2009, by United for a Fair Economy, we found that people of color are experiencing a silent economic depression. It’s silent because it’s going unnoticed, unacknowledged and unaddressed – and yet the evidence is striking.

We detail evidence that shows the current racial economic inequity, including poverty rates, wealth and assets and economic mobility. While racial barriers did not prevent an African-American from becoming president, they continue to impede many people of color from achieving the same economic success as their white counterparts.

“While media and public attention has focused on the recession that started a year ago for the total population, people of color have been experiencing a recession for five years,” said Amaad Rivera, Racial Wealth Divide Initiative leader for UFE and one of the report’s co-authors. “By definition, a long-term recession is a depression.”

The report – based on extensive research of current and historical data, academic papers, speeches, policy papers and government statistics – includes a critique of mainstream economic analysis and posits a new framework for evaluating economic well-being. The report is the first of its kind to do a thorough analysis of the historical reasons for the disparity in economic realities between whites and people of color and to suggest steps toward remedying the problem.

“The current economic crisis requires more than a color-blind stimulus. It demands a complete economic restructuring that addresses the racial wealth divide,” said Dedrick Muhammad, senior organizer and research associate at the Institute for Policy Studies, a co-author of the report.

The report explains the mechanisms that helped create the silent economic depression for people of color, explores how the depression affects individuals and communities of color, and proposes policy solutions to close the racial economic divide. 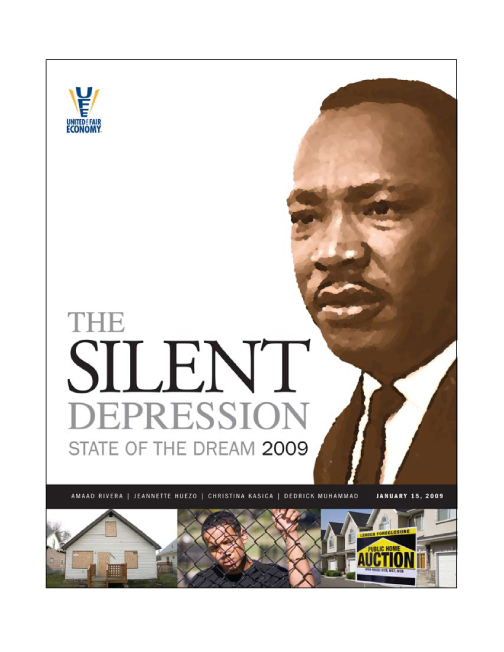 As we celebrate the 80th birthday of Dr. Martin Luther King Jr., we know that 2009 will be an historic year, with the inauguration of the first African American president and the deepening of what is likely to be the most serious fiscal crisis since the Great Depression.

Many American Blacks today are already experiencing a silent economic depression that, in terms of unemployment, equals or exceeds the Great Depression of 1929. Almost 12 percent of Blacks are unemployed; this is expected to increase to nearly 20 percent by 2010. Among young Black males aged 16-19, the unemployment rate is 32.8 percent, while their white counterparts are at 18.3 percent.

Overall, 24 percent of Blacks and 21 percent of Latinos are in poverty, versus 8 percent of whites.

In the corporate world, we are seeing the highest executive pay and the biggest bailouts in history. CEO pay is 344 times that of the average worker, not including perks like bonuses, stock options, corporate jets and housing subsidies. The riches of the few mask the deepening recession in the working class and the depression in communities of color.

Extreme economic inequality – which the U.S. experienced in the 1920s and is again experiencing now – is often a key indicator of recession and/or depression. The Black depression of today may well foreshadow the depth and length of the recession the whole country entered in December 2007.

A deep recession would see median family income decline by 4 percent. Thirty-three per cent of Blacks and 41 percent of Latinos would drop out of the middle class. The overall national rate would be 25 percent.

Economically, Blacks and Latinos have suffered disproportionately because of structural racism and the web of policies that evolved from it. Eliminating the racial wealth divide is an essential step toward eliminating institutional racism.

A comprehensive economic policy could deal a knockout blow to structural racism and raise awareness of individual racism. The path forward abounds with possibilities for shrinking the racial wealth divide and further healing the racism that still afflicts our nation.

If we institute systemic wealth-building programs that help everyone; if we repair and reinvigorate the decimated watchdog policies governing all aspects of home ownership; if we target 2009 economic stimulus programs to investment, not investment in tax breaks for the rich, but in the building blocks of the American dream – affordable housing, education, job creation, and savings among low- and middle-income people – we will make strides toward a more balanced economy.

Our nation’s economic policies have enabled the top 10 percent to accumulate 68 percent of the wealth, while sheltering the wealthy from sharing the nation’s risks. The children of the wealthy are not marching off to war because their economic alternatives are bleak. The rising cost of medical care does not require American millionaires and billionaires to cut back on food in order to pay medical bills. Thousands of additional layoffs will not harm the financial security of those in the owning class.

Fairer policies would share the risks of our entrepreneurial economy by helping balance the economic burdens among all of us, rather than piling them onto people of color, the poor and the middle class. Revoking the tax deduction for expensive second and third houses, ending offshore tax havens and policies that make it profitable to ship American jobs overseas, and calling – with a united voice – for those in the upper quintile of income and wealth to participate more fully in bearing the burden of fixing the economy would spread the risks more fairly.

Fairer policies would support low-cost mortgages, better and cheaper medical care for those making less than $200,000 a year, strengthening Social Security, and freezing or raising wealth taxes like capital gains and the estate tax.

Finally, we need to recommit ourselves, via policy and our unified voices, to affirmative action. We need recognition of and apology for the United States’ centuries of slavery and segregation. We need a commitment by the nation and its communities to acknowledge and repudiate the institutional and individual racism – epitomized by today’s Black depression – that still pervades our society.

With such actions we can move forward. The economic path behind us is collapsing in rubble. Looking backward, we can freeze in fear, or we can turn toward a future whose economic health and fairness we jointly create.

United for a Fair Economy is a national, independent, nonpartisan, 501(c)(3) non-profit organization. UFE raises awareness that concentrated wealth and power undermine the economy, corrupt democracy, deepen the racial divide, and tear communities apart. We support and help build social movements for greater equality. Contact United for a Fair Economy at 29 Winter St., Boston, MA 02108, (617) 423-2148, www.faireconomy.org or www.economiajusta.org. The 70-page “State of the Dream 2009” report can be read and downloaded at http://faireconomy.org/files/pdf/state_of_dream_2009.pdf.

‘Deep Denial: The Persistence of White Supremacy in United States History and Life’ by David Billings

Obama in Africa: Mauritius, the Chagos Archipelago and the Indian Ocean