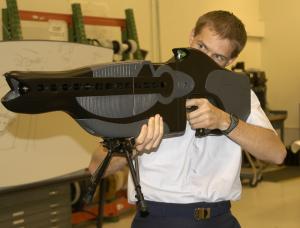 The research arm of the U.S. Department of Justice is working on two portable non-lethal weapons that inflict pain from a distance using beams of laser light or microwaves, with the intention of putting them into the hands of police to subdue suspects.

The two devices under development by the civilian National Institute of Justice both build on knowledge gained from the Pentagon’s controversial Active Denial System (ADS) – first demonstrated in public last year, which uses a 2-meter beam of short microwaves to heat up the outer layer of a person’s skin and cause pain.

Like the ADS, the new portable devices will also heat the skin, but will have beams only a few centimeters across. They are designed to elicit what the Pentagon calls a “repel response” – a strong urge to escape from the beam.

A spokesperson for the National Institute for Justice likens the effect of the new devices to that of “blunt trauma” weapons such as rubber bullets, “But unlike blunt trauma devices, the injury should not be present. This research is looking to reduce the injuries to suspects,” they say.

Existing blunt trauma weapons can break ribs or even kill, making alternatives welcome. Yet ADS has recorded problems too – out of several thousand tests on human subjects, there were two cases of second-degree burns.

The NIJ’s laser weapon has been dubbed Personnel Halting and Stimulation Response – PHaSR – and resembles a bulky rifle. It was created in 2005 by a U.S. air force agency to temporarily dazzle enemies, but the addition of a second, infrared laser makes it able to heat skin too.

The NIJ is testing the PHaSR in various scenarios, which may include prison situations as well as law enforcement.

The truly portable mini-ADS could prove the more useful, as microwaves penetrate clothing better than the infra-red beam, which is most effective on exposed skin. Although the spokesman says: “In LEC [Law Enforcement and Corrections] use there is always a little bit of skin to target.”

The effect of microwave beams on humans has been investigated for years, but there is little publicly available research on the effects of PHaSR-type lasers on humans. The attraction of using a laser is that it can be less bulky than a microwave device.

Human rights groups say that equipping police with such weapons would add to the problems posed by existing “non-lethals” such as Tasers. Security expert Steve Wright at Leeds Metropolitan University describes the new weapons as “torture at the touch of a button.”

“We have grave concerns about the deployment and use of any such devices, which have the potential to be used for torture or other ill treatment,” says Amnesty International’s arms control researcher Helen Hughes, adding that all research into their effects should be made public.

David Hambling is the author of the 2006 book, “Weapons Grade: How Modern Warfare Gave Birth to Our High-Tech World” and many articles on military technology for New Scientist, where this story first appeared – it is reprinted with permission – and the science section of the Guardian.