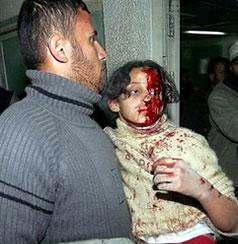 “Take some kittens, some tender little moggies in a box,” said Jamal, a surgeon at Al Shifa, Gaza’s main hospital, while a nurse actually placed a couple of blood-stained cardboard boxes in front of us. “Seal up the box, then jump on it with all your weight and might, until you feel their little bones crunching, and you hear the last muffled little mew.”

I stared at the boxes in astonishment, and the doctor continued: “Try to imagine what would happen after such images were circulated. The righteous outrage of public opinion, the complaints of the animal rights organizations …” The doctors went on in this vein, and I was unable to take my eyes off those boxes, sitting at our feet.

“Israel trapped hundreds of civilians inside a school as if in a box, including many children, and then crushed them with all the might of its bombs. What were the world’s reactions? Almost nothing. We would have been better off as animals rather than Palestinians. We would have been more protected.”

At this point, the doctor leans towards one of the boxes and takes its lid off in front of me. Inside it are the amputated limbs – legs and arms – some from the knee down, others with the entire femur attached, amputated from the injured at the Al Fakhura United Nations school in Jabalia, which resulted in more than 50 casualties. Pretending to be taking an urgent call, I took my leave of Jamal, actually rushing to the bathroom to bend over and throw up. 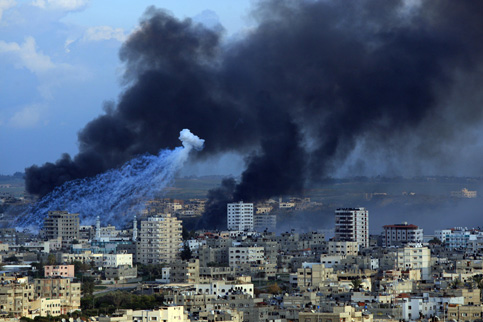 A little earlier I’d been involved in a conversation with Dr. Abdel, an ophtalmologist, regarding the rumors that the Israeli army had been showering us with non-conventional weapons, forbidden by the Geneva Conventions, such as cluster bombs and white phosphorus, known in military jargon as WP or Willy Pete. The very same that the Tsahal Army used in the last Lebanese war, as well as the U.S. air force in Falluja, still violating international norms.

In front of Al Auda Hospital, we witnessed and filmed white phosphorus bombs being used about 500 meters from where we were, too far to be absolutely certain there were any civilians underneath the Israeli Apaches, but so terribly close to us all the same.

The Geneva Treaty of 1980 forbids white phosphorus being used directly as a war weapon in civilian areas, allowing it only as a smoke screen or for lighting. There’s no doubt that using this weapon in Gaza, a strip of land concentrating the highest population rate in the world, is a crime all on its own. Dr. Abdel told me that at Al Shifa Hospital they don’t have the medical and military competence to say for sure whether the wounds they examined on certain corpses were indeed provoked by white phosphorus bullets.

But on his word, in 20 years on the job he had never seen casualties like those now being carried into the ward. He told me about the traumas to the skull, with the fractures to the vomer bone, the jaw, the cheekbones, tear duct, nasal and palatine bones showed signs of the collision of an immense force against the victim’s face.

What he finds inexplicable is the total lack of eyeballs, which ought to leave a trace somewhere within the skull even in case of such a violent impact. Instead, we see Palestinian corpses coming into the hospitals without eyes at all, as if someone had removed them surgically before handing them over to the coroner.

Israel has let us know that we’ve been granted a daily three-hour truce, from 1 to 4 p.m. These statements from the Israeli military summit are considered by the people of Gaza as having the same reliability as the Hamas leaders’ declarations that they’ve just provoked a massacre of enemy soldiers.

Just to be clear on this point, the soldiers of Tel Aviv’s worst enemy are the very same who fight under the Star of David. Yesterday a war ship off the coast of Gaza’s port picked out a large group of alleged guerrilla fighters from the Palestinian Resistance, moving as a united front around Jabalia. They shot their cannons at them. But as it turned out, they were their own fellow soldiers, with the shooting resulting in three being killed and about 20 injured.

No one here believes in the truces that Israel declares and, as it happens, Thursday at 2 p.m. Rafah was under attack by the Israeli helicopters. There was also yet another massacre of children in Jabalia: Three little sisters aged 2, 4 and 6 from the Abed Rabbu family were slaughtered.

Just half an hour earlier in Jabalia, once again the Red Crescent Hospital’s ambulances were under attack. Eva and Alberto, my ISM colleagues, were on board that ambulance and managed to film everything, passing those videos and photos on to all the major media.

Hassan was kneecapped, fresh from mourning the death of his friend Araf, a paramedic who was killed two days ago as he came in aid of the injured in Gaza City. They had stopped to pick up the body of a man languishing in agony in the middle of the road, when they were under fire by about 10 shots from an Israeli sniper. One bullet hit Hassan in the knee and the ambulance was filled with holes.

We’re now [as of Jan. 8] at a death toll of 688, in addition to 3,070 injured, 158 dead children and countless missing. Only yesterday, we counted 83 dead, 80 of which were civilians. Thankfully, the death toll on the Israeli side is still only at four.

Traveling towards Al Quds Hospital, where I’ll be working all night on the ambulances, as I raced along on board one of the very few fearless taxis left, zig-zagging to avoid the bombs, on the corner of one street I saw a group of dirty street urchins with tattered clothes, looking exactly like the “sciuscià” kids of the Italian post-war period.

They threw stones towards the sky with slingshots, at a far away and unapproachable enemy who was toying with their lives. This is a crazy metaphor, which could serve as a snapshot of the absurdity of this time and place.

Vittorio Arrigoni, a volunteer with the International Solidarity Movement, wrote this story for Il Manifesto, an Italian newspaper. It was translated from Italian by Daniela Filippin.