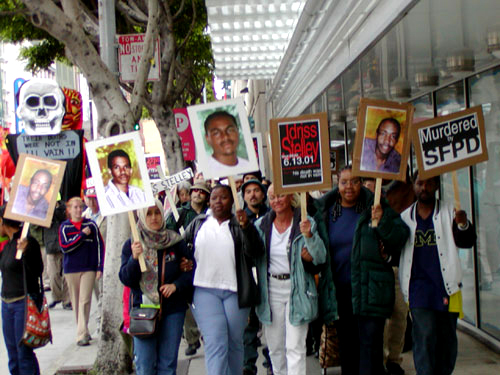 You, unarmed, pleading for your life as a young father, at the tender age of 22, while a rogue Bay Area Rapid Transit cop Tony Pirone punches you, then crushes your neck with his knee, shortly followed in his enthusiastic, racist, vicious rage by Officer Johannes Mehserle, who shoots you in the back, murdering you.

Last call. Lights out. Party’s ovah! You do not get to rise under the New Year’s night moon, Oscar. U DEAD. It’s BARTing while BLACK time.

A now fatherless baby daughter, Tatiana, 4 years old, is wondering where Daddy went. A mother, Wanda Johnson, cries her heart out for life.

Was Mehserle promised a medal in the BART PD’s corridors for solely taking the rap on Oscar’s murder? while infamous officer Tony Pirone, now nicknamed “Piraña,” like the murderous fish, on the Justice4OscarGrant yahoo group by one of its 288 subscribers, is left to enjoy a paid administrative leave?

Mehserle, who conveniently resigned – which likely safeguards his retirement pension – and has yet to offer any condolences to Oscar’s grieving family, was arrested as a “fugitive” in the state of Nevada on Jan. 13.

The corporate press, two weeks after the assassination of Oscar Grant III, made a furtive, one-day meek attempt the “angelize” the killer on the day following his arrest. The Chronicle’s puff piece on Mehserle depicted him as a “gentle giant” since childhood.

But as soon as Oakland D.A .Tom Orloff announced that no charges were being considered against Officer Pirone or the other two BART police officers who were busy confiscating the cell phones of horrified onlookers at the murder scene, instead of applying CPR on a dying, innocent Black youth, the glorifying of Mehserle came to an abrupt stop.

Be gone, “gentle giant.” Now he’s the prime contender for the recipient of the BART Police Grand Loser 2009 Award – although the BART Police Association has announced that it will cover all Mehserle’s legal fees from now on – Hello? That’s disquietingly reminiscent of the Chicago Police Association assuming the full cost of first-class air fare to his trial and VIP luxury hotel accommodations for Jon Burge, responsible for the torture of over 200 Chicago jail inmates, for three years in a row.

In the meantime, “progressive” political parties and their local factions experience growing pains and tension around

• who spearheads the Justice for Oscar Grant Campaign,
• who reaps the commensurate credits,
• who subsequently swells up the “hits” on their respective websites,
• who beefs up membership and recruitment,
• who outsmarts the “grassroots” competition on donation drives.

And, sadly,
• who will, exponentially, get preferential access and hegemony on Oscar’s family, so as to use the Justice for Oscar Grant Campaign as their prime promotional feature.

A few refreshing local exceptions to this shameless crap: Among them, but not limited to
• Minister of Information JR Valrey,
• NoJusticeNoBART, a newly formed coalition,
• and your SF Bay View National Black Newspaper.

Muddy waters will flow under the Oakland plantation’s bridge, crisis after crisis. … Next!

And after a year or so, all of us grieving families of loved ones murdered by law enforcement are soon forgotten to the world, or labeled “attention hoes” by the corporate press if we dare to continue demanding justice for our loved ones’ stolen lives.

“Community-based” and “faith-based” organizations are staging similar Justice for Oscar Grant rallies, protests and “town hall meetings” at the same date and time but at different locations. Please tell me that the logistic conflict created for supporters of justice for Oscar Grant is coincidental and not a deliberate strategy to offset concomitant events and I’ll rest my case.

I should know, as I maintain the calendar of related events on a daily basis on groups.yahoo.com/group/Justice4Oscar_GRANT/.

Four different NGOs and groups are running their own endorsement lists on “the people demand justice for Oscar Grant,” with no effort or intent to consolidate their lists into a central document, although we repeatedly send them a comprehensive national endorsement list, compiled daily by ISARC since Jan. 5, for which we request NO credit. Please explain the legitimate reason for their omission or refusal to consolidate these endorsements and, again, I’ll rest my case.

Does “hope” and “change” spell law enforcement transparency and accountability? or “police reform”? In my pipedreams, it does.

No, Dahlinks, not quite. There is a tiny difference.

You are ALIVE. You have a future. You will fall in love. You will have more children or get married if you wish, grandchildren, a career, birthdays and anniversaries to come. You will be at liberty to celebrate New Year’s Day, Valentine’s Day, Mothers’ Day and maybe your own Fathers’ Day, or whine about having to pay child support every month. You will maybe buy a house someday and enjoy your golden years, while …

Aaron Williams, Amadou Diallo, Kathryn Johnston, Sean Bell, Cau Bich Tran, Julio Ayala, Asa Sullivan, Big O Lefiti, Gary King Jr., Jose Luis Buenrostro, Casper Banjo, Mack “Jody” Woodfox, Oscar Grant III, Anita Gray, Sheila Amaya, Brown Beret Annette Garcia, and the myriad of Black and Brown Warriors slaughtered by law enforcement in the U.S., pre- and post-9/11, in the Land of the Proud and the Free, the New Land of Hope and Change … are very DEAD. They have fallen and won’t get up when the show is over.

You can lay face down on the pavement, time for a dramatic, self-indulgent moment of fame on Facebook or YouTube, and you get to get up to your feet and go home once the “shooting” is over.

If you are white, and were allegedly drinking ‘n fighting in New Year’s first hours, you got a CITATION.

If you are an under-age white minor, you were released back to your parents’ custody, for “boys will be boys.”

As for you, “revolutionary” boogie youth, if you did indeed do something “illegal” or distasteful on that infamous night, Daddy bailed you out IN ONE PIECE in the morning, and Mommy spent the rest of the day nursing your hangover.

As the mother of just one of the thousands of Black kids executed by police, my soul is fuming, as the malaise and hypocrisy doesn’t let up.

The antiwar movement in the Bay Area sends us one or two quick “From Gaza to Oakland” fancy PDFs, opportunistic demagogy paying expeditious lip service to the War at Home. And the unions’ overall shameless silence around the murder of Oscar is deafening.

Am I pissed? You betcha.

My agency has not attempted to contact assassinated young Brother Oscar’s family, not over my grieving bod, ever.

Oscar’s biological and extended family may eventually contact us, when and/or if they wish to do so. Or not. We honor their decision either way.

But I am not about to join the progressive bandwagon and contribute to their suffocation and demagogic exploitation by groups covertly at each other’s throats in the name of justice. Bitter tears … BARTING while BLACK. Party on, Oakland!

My heart intensely goes to the family … and candles burn 24/7 on our office altar – and my home altar, next to Idriss’ ashes in a shrine, along with pictures of Oscar, Idriss and other Victim-Warriors, Sistahs and Brothas fallen at the murderous hands of law enforcement. Blue candles for the Grieving Families, white candles for Stolen Lives.

You can contact mesha Monge-Irizarry, SF MOOC City Commissioner and co-director of the San Francisco office of Education Not Incarceration, ednotinc.org, at iolmisha@cscom (Idriss Stelley Action and Resource Center) or ISARConelove@cs.com.