Naturally we are outraged by Rupert Murdoch’s low rag The New York Post’s depicting Barack Obama as a monkey, whatever garbage they use to lie about this racist attack. But even more deadly is the fact that the Post in that cartoon is actually calling for the assassination of the president of the United States!

And this is punishable by prison.

Can you imagine anyone drawing a picture of Bush being slain, what the consequences would be? In Venezuela Chavez had to pass a law against the right wing calling for his assassination over television. What would be the penalty for some group calling for the assassination of past presidents of the United States by public media.

We cannot just be outraged by the racism of Murdoch’s disgusting infamy. We must call for the prosecution of the publisher and all involved with it. It is not just racism; it is a threat to the chief executive of the United States. This is one of the aspects of Barack Obama’s election to the presidency, that this NY Post brand of racist slander now is an attack on the president of the United States, and Murdoch and company must be made to pay for it.

This is the least we can do to begin to push for the reality of a “post racial” America, to begin to lock these egregious racists up! This should be a test case, and we should come together to push this.

What about you, Amsterdam News, Daily Challenge, Village Voice(?), New York Times, Johnson Publications, Washington Post, Essence, BET, TV One, ABC, CBS, NBC, ACLU, Move On, Outraged Citizens etc. Will you take up the call for prosecution of the creators of this blatant and dangerous threat to the president of the United States?

Founder of the Black Arts Movement in Harlem in the 1960s, former poet laureate of New Jersey and author of over 40 books, Amiri Baraka can be reached at amirib@aol.com or through www.amiribaraka.com.

Boycott everything owned by Fox

Hip Hop historian and journalist Davey D remarked in a caption under the New York Post cartoon, posted on his website, daveyd.com: “At a time where Obama has had numerous threats on his life and police have been trigger happy shooting or tasing to death Black men from coast to coast, what was this about? Time to boycott everything owned by Fox – from the NY Post to American Idol.” 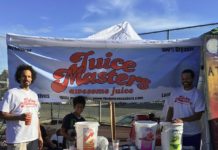 TheJuiceMasters.com’s Will Gordon III: Battling COVID-19 on the frontline with fresh juice