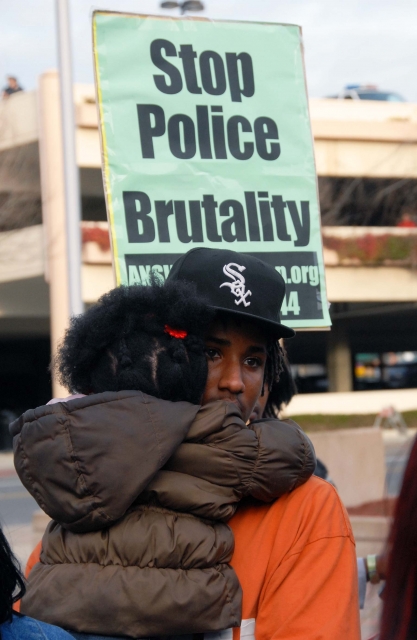 Oakland – No Justice No BART announced at a press conference Thursday that on Thursday, March 5, we will shut down the Fruitvale BART Station during the evening rush hours.

No Justice No BART is a campaign of protest actions targeting BART in order to advance community demands in the wake of the police murder of Oscar Grant.

It has been two months to the day since BART police murdered Oscar Grant and there has been no progress holding anyone at BART accountable. Therefore, we have no confidence that BART as an institution is making an honest effort to respond to community concerns.

In the interest of accountability and justice, the people involved in Oscar Grant’s murder and the attempts to cover it up must be held responsible for their actions. Furthermore, immediate measures must be taken to ensure that BART police can never kill again.

Until our demands are met we will hold weekly actions that disrupt BART’s ability to conduct business as usual. These demands are:

2) An independent investigation of the other BART officers present during Oscar’s murder! Each individual officer involved must be named, along with a list of possible or probable violations of police policy and procedure, as well as any potential criminal liability. Upon completion of the investigation, all officers suspected of procedural violations must be fired immediately, and any officers suspected of criminal wrongdoing must be fully charged and prosecuted by the district attorney.

3) Suspension of all officers present during Oscar Grant’s murder, for the duration of any investigations into their conduct.

4) BART employees who are already known to have engaged in cover-ups, procedural wrongdoing, and abuse of authority must resign, or be fired immediately. This includes:

– BART Police Officer Tony Pirone, who was videotaped violently assaulting Oscar Grant prior to his murder, as well as participating in the cover-up that followed.

– BART Police Chief Gary Gee, who attempted to cover-up the murder, and who has repeatedly failed to protect both the public and the public interest.

– BART General Manager Dorothy Dugger, who has failed in her role as supervisor of the BART police, and is complicit in the cover-up of Oscar Grant’s murder.

5) The BART Board must implement and fund economic development and youth programs to repair relationships with communities of color!

6) The BART board must abolish the BART police, fully divesting BART of any police power over the communities it serves!

7) Protesters arrested during mobilizations for justice for Oscar Grant must be released immediately and all charges against them must be dropped.

8) Tom Orloff must resign as district attorney before March 14 or we will begin his recall! 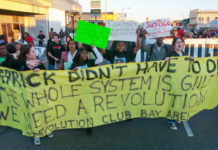