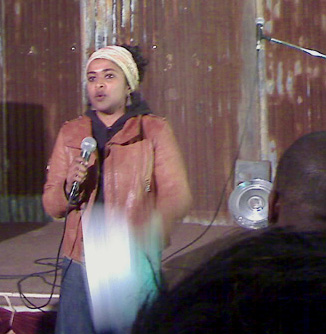 In the summer of 1966, I was part of that crowd of angry young African-Americans that exploded into rioting starting on the corner of 82nd and East 14th Street (now International Boulevard) in East Oakland.

I don’t remember, now, the precipitating event. There was certainly no Oscar Grant. It may have been spillover from a Castlemont High School outing at San Francisco’s Playland at the Beach, which was still open, or from the civil unrest earlier across the Bay at Hunters Point and in the Fillmore. In any event, it did not take much to touch off a riot in Oakland in the summer of 1966, or in any other major city in the nation, for that matter. We had reached the point where the tensions could not be capped and the demands could not be put off, and boiled over at the slightest jostle.

What I do remember about 1966 was the feeling that comes in the lull just before lightning strikes – the whole world expanding around you and within you and nothing strong enough to contain it – as we faced off against a line of Oakland police officers set across East 14th. I remember a young Black man walking out into the street, taking his shirt off and throwing it onto the sidewalk, and then walking back and forth as he threw challenges at the officers several yards away. I do not remember what he said, only his anger that all of us shared. And then it blew, and broke, and we scattered in all directions, carrying our anger like loaded weapons with us.

The strangest thing happened to me that night. I was with a small crowd running up one of the darkened streets in the 80s between East 14th and Bancroft – the killing fields now at the heart of Oakland’s drug zone, but then a quiet residential Black neighborhood – when a car pulled up beside me, and the driver rolled his window down. It was my mother and father, and whether they had driven out to look for me, or just wanted to see for themselves what was happening in their community, I’ll never know. I thought my father would order me into the car, but he did not. Instead he talked with me for a moment, asked what was happening, and then told me “be careful” before driving off.

I know, now, what my father must have thought and felt that night. To watch a mob out of control in the streets of your city is a frightening thing, even if you share its anger and agree with some of its goals. A mob, by very definition, has no overall leadership, but forms and reforms its leaders and directions as it goes. And from withinside the mob itself there is no control, only fleeting influence, and it turns and targets at will, fueled almost entirely by emotion, rarely directed by reason or thought.

In 1966, a paint factory still sat on the corner of 86th, between our house and Highland Elementary, across the street from Allen Temple Church. The factory had vast vats of thinner stored in its basement, along with barrels of finished paint. On the night of the rioting, a group of young men stood outside the factory and tried to figure out a way to set it on fire. Had they done so, it would have been spectacular, a fireball explosion that would have taken out not only the factory but several blocks surrounding, our house included. I am sure, in the frenzy of the moment, such consequences never crossed their minds. But that is the nature of a riot, and of the mob that mans it.

In the Oscar Grant riots of Jan. 7, I saw a faint echo of that type of thinking – or lack of thinking – in the crowds that trashed the cars along 14th Street from Franklin to Oak, burning the car belonging to reporter and editor Ken Epstein, who was upstairs at the Oakland Post offices at the time, working on a story attacking police brutality. 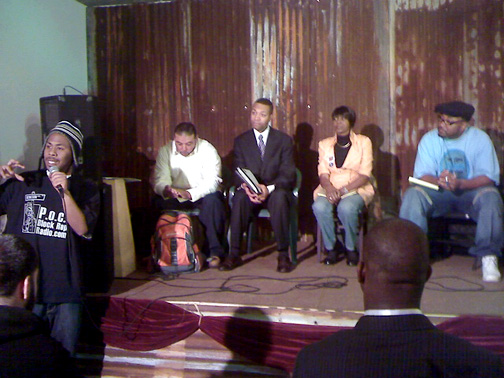 At a town hall meeting at West Oakland’s Black Dot Café some weeks later, I heard a young woman defend the vandalism that night by declaring, “Fuck their property!” I can understand and appreciate and agree with the sentiment, decrying those who put the value of property over the value of a human life, the life of Oscar Grant.

But I will always wonder who are the “they” the young woman was referring to. Did she think that it is members of the “establishment” who park their cars at 14th and Madison on a Wednesday night? Worse yet was the thought process of those who smashed the windows at the 14th Street McDonald’s with patrons still inside. I will never forget the look of fright and panic on the faces of those patrons as I came up moments after the crowd of rioters had passed on, locked in the restaurant and unable to come out, and probably unwilling to do so if they could. Fuck their property. But what about these people, who had no part in the death of Oscar Grant. Do we release “our” pain and fear by transferring it over to them?

It is one thing to empathize with the anger that rose up in the spontaneous violence of the night of Jan. 7, saying that this is a case of Oakland’s chickens coming home to roost, and the result of what happens when we long ignore the complaints about the treatment of our African-American and Latino youth. You can do that while condemning the violence, whether it be by or against the youth themselves.

It is quite another thing to embrace rioting as a tactic, as some organizations are now doing, elevating it to the status of “rebellion” and “the will of the people” and giving it political status and protection. Rebellion chooses its targets, right or wrong, in advance. A riot chooses its targets indiscriminately, on the whim of the moment, trashing an African hair braiding salon, for example, with political apologists arriving ex post facto to craft some revolutionary justification for what was just done. There is nothing that resembles leadership in such actions, only pandering to mob rule.

There was another comment of note at the Black Dot Café town hall meeting, either from the same young woman, or from another. Anyway, the young woman criticized those who would criticize the rioting. “On the first night of the riots,” she said, “I was watching CNN and we were the second story, just behind Barack Obama. We got national attention.

“But then people said that we shouldn’t be rioting, that we were hurting the cause, so we cooled down for the second march. And I watched CNN that night, and there wasn’t nothing about Oakland. Nothing. All their walking up and down 14th Street, they couldn’t get any attention. But when you break shit, you get attention.” The town hall meeting, by the way, was co-sponsored by Black Dot and the Prisoners of Conscience Committee (POCC) and was called in the aftermath of the Oscar Grant riots. It was an important forum allowing normally voiceless people a chance to stand up and be heard; we need more of that.

I say that despite the fact that I disagreed with a number of the things that were said by speakers that night. Perhaps I say that because I disagreed with a number of things that were said that night. It is only in such dialogue that we can come to an understanding of our differences and what divides us, and make the first steps towards resolving what differences are possible to resolve.

But back to the young woman’s point.

There is little that can be argued with her contention that rioting will get you noticed. The problem is, once you have gained the nation’s attention – which Oakland did – what comes next? How do you take advantage of the attention to press forward your demands and your programmatic changes? That takes a different set of skills, and almost always a different set of people in the meetings and at the negotiating tables than the ones who have been out on the streets tossing bottles and bricks and scuffling with the police.

There has been a general contention by the most radical of the Oscar Grant movement supporters that had it not been for the two nights of violence in downtown Oakland, former BART police officer Johannes Mehserle would not have been arrested and charged with murder in the shooting death of Oscar Grant.

It’s an arguable point. One can argue that because of several aspects of Oscar Grant’s death – the horrific, brutal nature of the shooting itself, the widespread viewing of the cellphone videos, and the character of Mr. Grant himself, a well-known young man who is difficult to demonize – the various engines of this community were moving in the Mehserle arrest direction already. The rioting of Jan. 7 – demonstrating such widespread community anger as it did – either speeded up that movement towards Mehserle’s imprisonment, or, in the alternative, caused it altogether.

That is the crux of the violence-nonviolence causal debate being waged amongst and between the various organizations in the Oscar Grant struggle right now, but that is not the point. The community – both the political community and the general community – was outraged. The riots broke. Mr. Mehserle was jailed and charged. Historians will have to sort out which was the determinant factor. The question now, as Dr. Martin Luther King Jr. framed it some 50 years ago, is where do we go from here, chaos or community?

Oakland’s resurrection from the destruction of Loma Prieta in 1989 has bypassed large sections of the city, particularly the city’s African-American and Latino youth and the outskirts communities they live in. While Oakland in late Elihu Harris years and throughout the Jerry Brown years poured millions of dollars to try to resurrect its ghostly downtown – culminating in this week’s ritzy and expensive revival of uptown’s Fox Oakland Theater – large sections of the rest of the city have suffered neglect of attention.

Young African-Americans and Latinos were either indiscriminately targeted by police for harassment large and small – in the excesses brought out in the Allen v. Oakland “Riders” settlement, for example, or the targeted “Operation Impact” and “sideshow zone” sweeps – or else their complaints and concerns as the most direct victims of the city’s long-term violence were downplayed, overlooked or outright ignored. A lot of us have been making that point over the past years, but clearly not nearly loudly, nor effectively, enough.

Those policies of either marginalizing or outright demonizing of the city’s dark-skinned youth lie buried under Oakland like so many kegs of explosive, primed to blow. How we respond will determine the character of Oakland and, almost certainly, the quality of its future and its citizens, all and every one of them.

Bay Area journalist J. Douglas Allen-Taylor writes the column UnderCurrents; he can be reached at safero@earthlink.net. This column was published Thursday, Feb. 12, in the Berkeley Daily Planet.

Jack Bryson speaks; he’s the father of two brothers, friends of Oscar Grant, who were detained on the Fruitvale BART platform with Oscar when he was murdered.

Minister Keith Muhammad, leader of the Nation of Islam in Oakland, speaks.