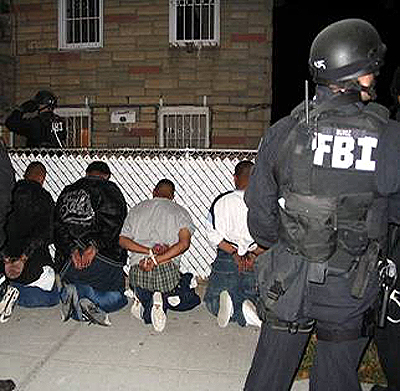 In early February, the FBI issued a media statement citing concerns about the spread of gang violence as reported in the “2009 National Gang Threat Assessment” produced by the National Gang Intelligence Center (NGIC). Findings in the 40-plus page report were based on information from a variety of agencies, including the Bureau of Alcohol, Tobacco and Firearms; Department of Justice; Drug Enforcement Administration; FBI; Federal Bureau of Prisons; U.S. Army; Customs and Border Protection; Immigration and Custom Enforcement; and local and state law enforcement agencies.

As of last September, there were nearly 1 million gang members, according to NGIC, belonging to 20,000 gangs spread across the country. Most engage in a variety of criminal activities, the most prevalent being drug distribution and sales of marijuana, cocaine and other street drugs, the NGIC reports. Gangs are said to be migrating out of the inner-cities to suburban areas, causing an increase in gang-related activity.

“Criminal gangs commit as much as 80 percent of the crime in many communities, according to law enforcement officials throughout the nation,” the report declares.

However, some suggest such a claim is little more than “fear mongering” and an attempt to spur a media campaign designed to manipulate the public into believing more funding is needed for gang and law enforcement programs. Such programs have historically devastated Black and Latino communities, said LaWanda Johnson, spokesperson for the Washington, D.C., based Justice Policy Institute (JPI), an organization founded in 1997 that has published nearly 50 reports exploring the negative impacts of incarceration.

In a phone interview, she said this latest focus on gangs and drugs comes just weeks after the FBI issued its 2008 Preliminary Semiannual Crime Statistics report showing violent crime down 3.5 percent nationwide. “Where is the data coming from?” Johnson asked of the claim that 80 percent of crime was gang-related.

Usually when crime decreases, she explained, a first response is to reduce funding for gang surveillance and policing programs. In an effort to keep those funds flowing, she continued, some law enforcement agencies resort to using buzz words like “juvenile crime” and “gang violence” to create a “media hype” which distorts reality.

“Most violence is not committed by gangs. It’s not what people are trying to make it out to be,” Johnson said, adding that the historical pattern has been to increase police presence and ignore solutions which would better enhance public safety. Even many in the Black community fail to see the futility of past gang violence prevention efforts.

“We still haven’t gotten to the point where we realize that more police does not equal more safety. We should know that,” she said.

Some law enforcement agencies resort to using buzz words like “juvenile crime” and “gang violence” to create enough “media hype” to keep funds flowing for their gang surveillance and policing programs – programs that have historically devastated Black and Latino communities.

For decades now, many who saw no other answer to inner-city urban crime and violence willingly accepted heavy-handed policing tactics which Johnson said ensured that many Black youth grew up in “war zones,” some eventually counted amongst the “obscene” number of Black males behind bars in America, one of the by-products of policies instituted to counter public outcry about increased gang and drug violence.

Interestingly, Johnson noted that, although the public face of gangs is Black and Brown, approximately 40 percent of gang members aged 12-16 are White. The image of gang members being predominantly non-White is even given in the NGIC report where, out of 28 listed street, prison and motorcycle gangs, only one – the Aryan Brotherhood – was identified as having Caucasian membership.

The government’s war on drugs and gangs has, over the years, disproportionately affected Black communities even though JPI found that Whites and Blacks use and sell drugs at similar rates. Nationwide, Johnson said statistics show that for every 33 White men imprisoned for drugs, 638 Black men are jailed. “The people who actually go to jail for drug offenses are mainly African American,” she said.

The situation may be on the verge of escalating as billions of dollars of President Barack Obama’s proposed stimulus package are set aside to fund the types of law enforcement programs used to counter increased gang violence. “We see in the stimulus package that they have earmarked $4 billion toward Byrne Grants and another $1 billion for community oriented public policing programs,” Johnson said.

The grants would fund drug task forces, she explained, while the public policing funds would be used to hire 13,000 more police officers in the nation. “These programs were funded during the Clinton administration and they contributed to the wholesale incarceration of communities of color.”

It is said that more Blacks ended up in prison after Clinton’s terms than after President Ronald Reagan’s, despite the fact that some considered Clinton the “first Black president.” Now that a real Black president is in office, it appears he is on the same path toward even greater disparity for the many Blacks who may end up behind bars during Obama’s historic term.

JPI has called on the president and Congress to reject funding for more police and anti-gang programs which, ironically, were done away with during President George W. Bush’s terms, having been “found to be ineffective as a means of increasing public safety.”

‘Even though cops swarm our neighborhoods every day, it has not increased public safety.’

Such funds, Johnson said, would be better used on programs with proven records of improving community safety, not on strategies designed only to increase law enforcement presence in already over-policed communities. “Even though cops swarm our neighborhoods every day, it has not increased public safety,” she said. “We are no more safe in our neighborhoods now than in the ‘80s. Investments in education, community services, schools and jobs are what make communities healthier.”

Adeeba Folami is a freelance journalist residing in Denver, Colorado. She can be contacted via her website http://bhonline.org.

Editor’s note: Within hours of the Senate’s passage of its version of the stimulus package Tuesday, Feb. 10, House and Senate negotiators began the work of reconciling it with the House version. To persuade them to reject funding for more police and anti-gang programs, call your Congressional representatives. Contact them through the online Congressional Directory or by calling the Congressional Switchboard at (202) 224-3121 or, toll free, (877) 210-5351 or (866) 220-0044.