This Saturday, Feb. 28, at 2:30, the Black Repertory Theatre, 3201 Adeline St., Berkeley, has generously set aside the matinee performance of “for colored girls who have considered suicide when the rainbow is enuf” as a benefit for the Bay View newspaper. Meet celebrated playwright Ntozake Shange, who will be there in person. Call (510) 652-2120 or visit www.blackrepertorygroup.com for tickets and information.

The New York Times calls the Obie Award-winning play “(e)xtraordinary and wonderful … Ntozake Shange writes with such exquisite care and beauty that anyone can relate to her message.”

“Ntozake Shange’s extraordinary ‘choreopoem,'” wrote the Long Island Press, “is a dramatic elegy for black women with an undercurrent message for everyone. Its theme is not sorrow … but courage. Its strength is its passion and its reality. … An unforgettable collage of one woman’s view of the women of her race, facing everything from rape to unrequited love. … Wisdom and naivete go hand in hand. Wounds and dream intermingle; strong passions melt into simple courage.”

With the Black Rep’s stellar production, “colored girls,” which was first performed in Berkeley in 1975, returns to its roots. It moved to Broadway in 1977 and became a movie in 1982, featuring Alfre Woodard and Lynn Whitfield.

The hotly anticipated East Coast revival, set to open on Broadway last fall, starring India.Arie in her Broadway debut and produced by Whoopi Goldberg, had to be postponed when a financial backer withdrew. This West Coast revival at the Black Rep is choreographed by Alvin Ailey Dance alumna Linda Johnson. Sean Vaughn Scott and Cassandra Henderson are the directors, and the legendary Mona Vaughn Scott is the executive producer.

The New Yorker wrote in 2007 of the play’s power: “[A]ll sorts of people who might never have set foot in a Broadway house – black nationalists, feminist separatists – came to experience Shange’s firebomb of a poem.”

“Colored girls” is a choreopoem, a series of 20 poems performed by nine actresses dealing with love, abandonment, rape and abortion. It concludes with one of the women saying, “I found God in myself/ and I loved her/ I loved her fiercely.”

In this play, every woman will see herself and men will understand better the women they love. Come see why it’s my all-time favorite. Tickets are $7 for children and seniors, $10 for students and $20 general admission. Call (510) 652-2120 or visit www.blackrepertorygroup.com. 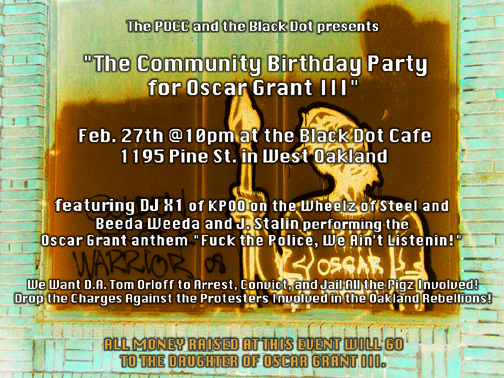 Pressure DA Tom Orloff to prosecute all the BART cops involved in lynching Oscar and to drop the charges against the protesters. Our own MOI JR was the only journalist arrested and one of the few people charged with a felony – the ridiculous and totally false charge of felony arson, of a trash can!

His next court date is this Friday, Feb. 27, 9 a.m., in Courtroom 112 at 661 Washington St., Oakland. Be there to show the judge and DA that the people stand solidly behind him and all those who were arrested. Call DA Orloff at (510) 272-6222 to demand that he charge the cops and drop the charges against the protesters. 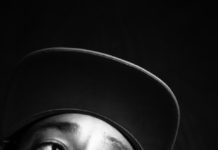