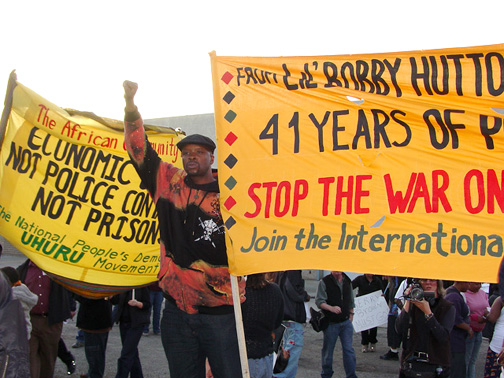 It began with an apparently routine traffic stop by two motorcycle cops when suddenly Mixon opened fire, killing one on the spot and mortally wounding another.

In a final shootout at his sister’s home several hours later, two SWAT officers were killed with an assault rifle before Mixon himself was fatally gunned down.

Another violent police confrontation in the Black community; not the first, not the last. Basic conflicting social, economic and political interests remain between the protagonists and are sure to explode again.

This completely misses the point. Haven’t we heard enough of these domestic versions of “Shock and Awe?”

What more can be done to repress a Black community that already comprises 40 percent of the national prison population of nearly 2 and a half million and suffers an unemployment rate double that of the white population? 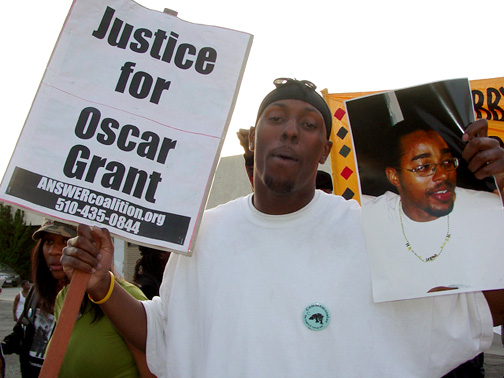 One of the worst consequences is crime in the Black community. It is no joke. It is real, it is violent and it is extensive. It is rare for a family not to have been touched by senseless predatory acts among and between Black youth.

But police are not the solution.

Cops are not equipped to either understand, appreciate or address the despair that spawns violence so prevalent in the Black community.

Instead, it better suits their “law enforcement” approach to virtually treat whole sections of youth as criminals.

My Hunters Point neighborhood of San Francisco is overwhelming Black. The community suffers unemployment and crime that rivals the worst sections of Oakland. Several murders have occurred on my street the last few years and only last week I witnessed from my front window a random drive-by shooting.

As I hit the floor in my living room, automatic gunfire sprayed my beat-up parked pick-up, smashing the windshield and headlight and bursting a tire. More ominously, one bullet penetrated the front house window of my neighbor, thankfully missing the occupants.

Both our reactions were similar. Neither of us called the police. If called, the police would have either done nothing or, worse, used the terrible incident as an excuse to harass and intimidate neighborhood youth.

Of course, there is not a universal agreement in the neighborhood on when or if to call the cops though everyone certainly agrees that if someone is breaking into your home or threatening your life, you’ve got to call for help quickly.

But aside from these extreme circumstances, are police a reliable counter to the criminal element in the community? I think not.

It’s time to recognize the harsh reality. Police are virtually an occupying military force in Black urban centers. Their presence will neither eliminate the plague of rampant crime nor address the underlying disease of extreme impoverishment.

The historical record amply demonstrates this fact though there remains wide disagreement on the reasons. My view is that police represent the propertied and monied power structure in this country which both exploits and excludes the overwhelming majority of our population, particularly minorities.

The police role, therefore, is consciously limited to containing and minimizing inevitable explosions of violence that periodically burst from the enormous pressures of ghetto existence. Police neither have the resources nor job description to resolve the enormous social problems endemic to these communities.

In that way, police actions are remarkably similar to U.S. failed military strategies abroad. Police units are dispatched from their headquarters’ bunkers on “search and destroy” missions soon to return to the comfort and safety of the “Green Zone.”

Enormous resources are wasted on these failed military strategies, both abroad and at home. The Oakland police budget, for example, consumes an incredible 43 percent of the city’s General Fund.

Clearly, despite repeated calls for more cops, ending violence in the Black Community is not a matter of devoting more police resources. In fact, as we shall see from our later examination of Oakland’s sordid police brutality record, police activity often generates its own crime wave.

The Oakland police budget consumes an incredible 43 percent of the city’s General Fund.

But for now, it is sufficient to observe that the huge contradiction and divide between the role of the police and the needs of the community is most understood by African Americans who clearly retain a profound suspicion and mistrust of cops.

It helps explain the relatively muted community response to the shooting deaths of the four officers despite extremely aggressive efforts by the political establishment, the media and many churches to mobilize public sympathy. 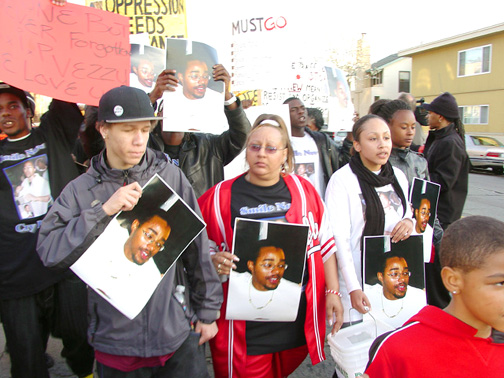 Some reports of “mixed reactions” to the shootings of the four officers did creep to the surface when news outlets began cautiously mentioning police being “taunted” at the crime scene. Observers were apparently shouting about police brutality, including specific mention of the Jan. 1, 2009, horrific shooting by a transit cop in Oakland of unarmed young Oscar Grant, a 22-year-old Black father of two.

In another example, KTVU local television reported that Sandra Cook “took issue” with the extreme amount of attention the officers’ deaths have garnered. Cook said her brother and nephew were shot and killed by San Francisco police in separate incidents. Another nephew was killed in a shooting in Oakland.

Speaking for many who noticed that extensive sympathetic press coverage of the four officers’ deaths was in sharp contrast to the single-paragraph or non-coverage usually reserved for murders of Black youth, Cook commented that “when my nephew got killed, there wasn’t any coverage of him.”

In another interview, Aisha Guillory, sister of the now notorious Mixon, reminded embarrassed reporters that her dead brother was also worthy of mention among the slain and not just the four officers.

She mentioned constant fears of police violence among minorities when she told news reporters that “my brother probably had Grant’s murder in his mind, and when he was pulled over by the cops, he panicked, knowing they would find he had a warrant out for his arrest. He had no chance, period,” she said.

These are rare glimpses of alternative insights of the Oakland police. Even if many share these views, however, few will risk any pubic dissent from the well-orchestrated extravagant ceremonies invoking sympathy for the police.

The Oakland Police Department recorded one of its most notorious criminal acts in 1968 with the assassination of 17-year-old Black Panther Lil Bobby Hutton.

This young man, the first recruit of the newly-formed Black Panther Party, was shot numerous times with his shirt off and his hands in the air while surrendering after a shootout also involving Panther leader Eldridge Cleaver, who described the scene in his numerous writings and interviews.

Cleaver was saved from Hutton’s fate by an alert, supportive crowd attracted by incessant gunfire from the overzealous 50-man police assault squad. A sign of those turbulent times, more than 2,000 people attended Hutton’s funeral, including actor Marlon Brando.

Lil Bobby remains an important and memorable symbol against police brutality to this day.

More recently, in the year 2000, several renegade officers known as the “Riders” were accused of planting evidence and assaulting drug suspects in the Black community of West Oakland. They were fired but eventually acquitted in two separate criminal trials.

Even before the headline-grabbing assassination of Oscar Grant this past January, many residents already were outraged by the fatal police shooting of Mack “Jody” Woodfox, 27, after a car chase in July 2008.

Authorities say Officer Hector Jimenez fired his weapon because he believed Woodfox, who is Black, was reaching for a gun. But no gun was found. Provoking even more outrage, an autopsy later revealed that the victim was “shot numerous times” in the back from approximately 25 feet away.

“He was clearly unarmed. To us that is criminal,” said prominent Oakland defense attorney John Burris.

“There is a sense of frustration that the system is not responsive,” continued Burris, who is representing Woodfox’s family and has also filed a $25 million claim on behalf of Grant’s family. “There is a sense among African-American youth that police accused of misconduct against them are not held accountable.” [cbs5.com]

Meanwhile, a dozen officers currently face disciplinary action for allegedly lying to obtain search warrants in drug cases. Examples of Oakland police corruption and brutality also extend to the top echelon. A commander is on paid leave for his mishandling of an alleged beating in 2000. It led to a $10 million lawsuit.

Under pressure from these police misconduct revelations, Oakland Police Chief Wayne Tucker resigned on Jan. 27, 2009, before several City Council members were about to give him a public vote of no confidence.

Incredulously, on his way out, the Chief admitted no responsibility but instead decried the lack of funds for his department.

A social concept of policing 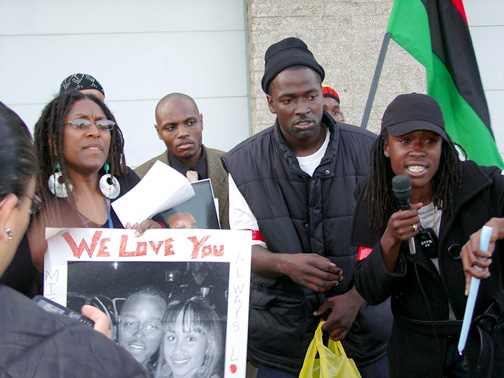 There is another way. How about a police force that comes from within the oppressed community and that is democratically controlled by that community? Why is that concept so hard to grasp?

These dedicated revolutionaries had the moral authority to severely deal with the genuinely criminal element, including summary executions. The Arab community trusted these enforcers to fairly uphold common standards of justice without fears of excessive brutality or of being unfairly targeted.

Similar methods were used by the African National Congress (ANC) in the 1990s to curb violent crimes in the Soweto township outside Johannesburg. Again, the ANC had broad legitimacy to act forcefully against incorrigible violent thieves, including placing tires around their waists and setting them ablaze. The ANC was entrusted with these responsibilities because of its historic record of upholding the highest standards of justice in its fight against Apartheid.

I mention these incidents not because I am suggesting extreme measures taken during times of insurrection be our model but because the examples demonstrate that violent police actions alone are not the problem. In fact, extreme measures can be tolerated by communities under certain conditions.

But in America, both the brutal tactics and “siege mentality” of police produce numerous bloody conflicts in oppressed communities. Fundamentally, these confrontations result from police functioning as representatives of the economic power structure which, as I mentioned previously and as we have ample recent evidence, exclusively serves the financial and property interests of wealthy bankers and industrialists.

The remedy, therefore, is not simply removing individual racist police officers who engage in misconduct.

Black community control of the police

The problem is much deeper and requires far more substantial reforms. It is actually an institutional problem requiring the removal from Black communities of the whole police force as currently organized to be replaced by a re-constituted police force democratically controlled by the Black community.

The FLN and ANC examples demonstrate that oppressed communities can successfully police themselves if given the resources and authority. It is not a fanciful, idealistic notion, therefore, to suggest that Black communities develop the democratic structures to control and direct the police.

This proposal has American roots as well. In fact, it was part of the original10-point program developed in 1966 by the Black Panther Party for Self-Defense.

Of course, the prerequisite for self-policing by African-American communities would be substantially increased political awareness much akin to the civil rights and Black Panther era of 40 years ago.

New social awareness of principals of solidarity and unity would inevitably be accompanied by large sections of youth rejecting the destructive rivalries of gang life.

This is a process that cannot be achieved from forces alien to the community. It must come from within and be part of a total political solution to the hardships that are part of everyday inner-city life.

Carl Finamore lives in San Francisco. He can be reached at local1781@yahoo.com.

Rusesabagina on trial and the shooting deaths of a Rwandan dissident...