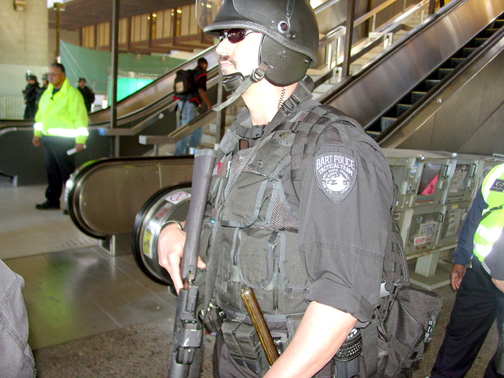 When the full story is finally told and, though not likely freely admitted by many, deep within the spiritual thinking of numerous African Americans, an emotional candle will be lit in memory of Lovelle Mixon, the man who, in a horrific shootout in which he was finally killed, shot five Oakland police officers, four of whom have died. They will then say to themselves, “But for the grace of God I could have been he.”

Mixon, whom family and friends say was not a monster – “He didn’t walk up and down the street killing people” – was by many accounts a marginally normal person in African American neighborhoods. But the truth of the matter is, Lovelle Mixon, who, police say, is suspected of an earlier killing and rape, represented the man to whom society had given almost nothing, the man of whom society expected nothing. Lovelle Mixon was America’s worst nightmare: the Black man with nothing to lose.

The line between those of us who have something to lose and those of us who don’t is tenuous at best. In many cases the line of separation is almost invisible. Virtually every African American has a family member or knows someone who has been to jail or prison, or remains there today. There are no economic boundaries to this truth. Is there one African American oriented church located in the Black communities that doesn’t have a ministry that outreaches to the incarcerated? Likely no.

The day before the East Oakland shootout, this writer was on the phone talking to a long time friend whose husband had been released last year from Angola prison after serving 25 years. Louisiana paroled him to California where he landed a job with a CalTrans program for parolees.

Too bad Mixon, who had been trying to get a job, wasn’t guided toward that program. But chances are it wouldn’t have done any good.

Even though African Americans are just 13 percent of the population, we currently comprise 50 percent of the U.S. prison population. Many might say this is because during the 1990s President Clinton enacted draconian drug laws that unfairly were weighted against Blacks. Although this situation has always existed, the criminally lopsided racial disparities of those who are sent to prison were widely existent as far back as the era of slavery. In the early 19th century in several states that outlawed slavery, Blacks made up 50 percent of those who were incarcerated.

What this should signal to those who are paying attention is that the U.S. doesn’t have a clue when it comes to creating racial equality.

Everything that has resulted from the civil rights movement, up to and including the limited efforts at affirmative action, in actuality is little more than window dressing. Many have benefited, but a huge and growing Black and Latino underclass simmers.

Despite the rapid influx of immigrating cultures in recent decades, the U.S. mostly still conforms to the example of the apple. At the apple’s core exists the historic white/Black dichotomy. Around the core revolve the more recently arrived or ethnic cultures.

It is for this reason that in America the issue of race is almost always a significant factor in every significant issue, from the destruction of the economy to March Madness. 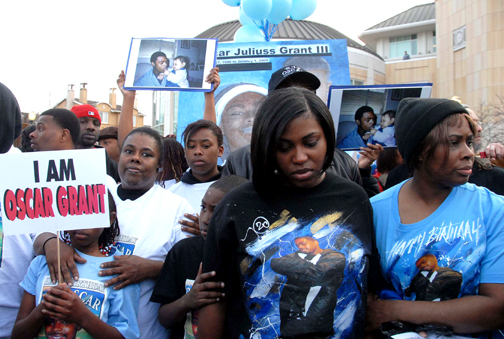 With all due respect and sympathy to the survivors of the fallen, it has to be noted the deceased officers, all white, lived in Tracy, Danville, Concord and Castro Valley. The fact that white officers travel from mostly white America to patrol Black and Latino America is not a unique situation. Anyone who has seen the film, “The Battle of Algiers,” will immediately recognize the situation for what it is: occupation.

It’s the same in most U.S. cities. It’s true in San Francisco, Chicago, New York and most definitely – perhaps especially, given its unwarranted progressive reputation – Berkeley.

Of course in all similar situations it’s never just an issue of color – nor is it just an issue of an occupation force keeping their booted heels on the necks of the oppressed. Because within the dialectics of progressive philosophy, it’s a time-honored truism that capitalism tends to turn its opposites into itself.

Thus it has become that in a multitude of circumstances Blacks often have become the oppressors of Blacks – regardless of whether they belong to the local police agencies or Crips and Bloods-type criminal organizations. In some cases, as has been alleged in regards to several elements of the Oakland Police Department, the line between paramilitary and criminal agencies has become vague, perhaps even disappeared.

It is believed in some quarters that an investigation into the possible blurring of distinction between some members of the Oakland Police Department and criminal formations in the city is what led to the assassination of Oakland journalist Chauncey Bailey.

All of the media, all the local and state political classes will come together to honor the murdered police officers as heroic defenders of the state. There will be great and emotional public displays of grief. Bagpipes will be ubiquitous as California’s paramilitary organizations gather to honor their fallen comrades.

The bagpipes, played at the funeral of all police and fire department funerals in the U.S., indicate it is those agencies through which the Irish were allowed entrance into the U.S. middle class 200 years ago – a privilege not extended to African Americans in any numbers until just one generation ago.

But for those who experience the daily tactics and attitudes of the paramilitary occupation forces, distrust and questions will remain.

The Oscar Grant demonstrations, in protest of his New Year’s Day shooting by a BART police officer, should continue.