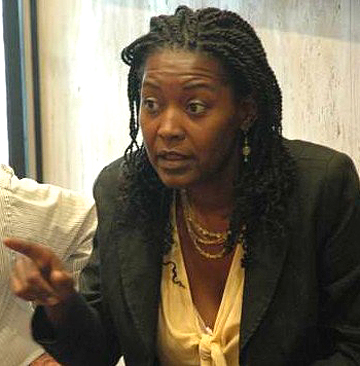 “The gist of this lawsuit is that she may have unlawfully obtained the documents. Handing them over is a discovery tool to see if this in fact the case,” explained Judge Lloyd Medley Jr. today in the Civil District Court. “The plaintiff’s concerns are valid.”

In his ruling, Judge Medley granted several of the City Council’s requests against Tracie Washington, but his ruling also sided in important ways with Ms. Washington, her counsel and the gallery of supporters gathered behind her in court. Rather than forcing Washington to hand over copies of emails and much more to the City Council’s attorneys, Judge Medley will personally review the records and see if the plaintiff’s arguments have merit.

The documents in question are electronic copies of emails sent over a 30-month period by four members of the New Orleans City Council: Jacquelyn Clarkson, Arnie Fielkow, Shelley Midura and Stacy Head. Lawyer and civil rights activist Tracie Washington acquired the emails through a public records request made in December of 2008. Her intention has been to gather city records and place them on a website, accessible to the public, in order to facilitate citizen involvement and oversight.

The City Council’s lawyers argued vehemently today against disclosure or dissemination of the records to any other parties, and even against the process by which the documents were obtained. “Veronica White [the city Sanitation director] acquired the documents from the city’s Information Technology Office and handed the CDs over to Ms. Washington. White didn’t keep copies of the CDs. We don’t know what she has; the city doesn’t know what she has.”

For these reasons the plaintiffs argued for and have won a preliminary injunction preventing Ms. Washington from sharing the documents with anyone at this point in time. They had mixed success also in their arguments based on attorney-client privilege. Lawyers for Herman, Herman, Katz and Cotlar, the firm representing the council members, stated today that there are thousands of letters of correspondence between the council and various lawyers and experts they work with: “All these lawyers are retained and paid for by the City Council, advising the City Council; the City Council is their client. Therefore only the City Council can waive their attorney client privileges, not the mayor’s staff.”

The council’s lawyers went much further today though and made a full court press against Ms. Washington. They argued for an order that would have forced her to provide the original and sole copies of the CDs containing the emails to them and another order that would force the defendant to hand over her computer to the plaintiff’s lawyers.

They even went so far as to imply that Ms. Washington could and should be charged with obstructing a federal investigation. “There is an ongoing federal probe into the New Orleans Affordable Housing Agency,” explained attorney Steven Lane in reference to the city chartered non-profit agency that has come under scrutiny for fraud and mismanagement. “Ms. Washington’s actions could be interpreted as interference in a federal investigation.”

The plaintiffs also disparaged Ms. Washington, calling her conduct ethically questionable. According to their account, she had every reason to believe she was in possession of records that could have been exempted according to the Public Records Act.

Ms. Washington’s attorney, Clarence Roby, pointed out repeatedly to the court that his client’s public records request was in no way a violation of the law, as the plaintiffs insinuated several times. Judge Medley agreed in his ruling, calling any outstanding issues of how the records request was handled “an internal issue for the city.”

Roby also noted the serious consequences this case has already had for democracy in Louisiana. “This serves to have a very chilling and intimidating effect on public citizens who are trying to access their government. It chills the effect of the sunshine law to demand of someone to give back the documents they lawfully requested.”

According to Washington’s supporters, the precedent is frightening and serious for all Louisianans: Make a successful public records request that an official doesn’t like and you too could be summoned to court, have your personal computer demanded from you along with the records you got, and have your ethics called into question while the state’s attorneys imply wrongdoing of all sorts on your part. Ms. Washington, a lawyer herself with adequate legal representation, seems bent on fighting this battle so that those with fewer resources don’t have to in the future. After today’s case, several supporters approached her and thanked her for not bowing down to the council’s demands.

Although lawfully requested, the manner in which the records were released does remain an outstanding question. According to correspondence cited by the plaintiffs, the emails were gathered by staff in the city’s Information Technology Office, handed over to Sanitation Director Veronica White, who then produced them for Washington.

Make a successful public records request that an official doesn’t like and you too could be summoned to court.

The ruling today did not touch on this process except to imply the city should clarify its internal procedures and follow them. Some of Washington’s supporters in court today noted that this unorthodox route to the records in question might have been the only means available, as the City Council has stymied several other outstanding requests.

Brad Ott, a spokesman for the Committee to Reopen Charity Hospital, noted after today’s ruling that his public records request to the council for documents related to the proposed LSU/VA development has been mired in the City Attorney’s office for months now. “Core to this case,” explained Ott, “is the refusal by the city to confront squarely their own flawed process of having Louisiana public records requests diverted to their respective legal counsels. This invariably delays response and runs afoul of the Records Act provisions.” According to Ott, “Tracie justly executed the Public Records Act, yet she is the one assailed for wrongdoing? This is wrong.”

Although the City Council’s lawyers argued that the emails in question are filled with attorney-client information and other exempting features, it’s not clear that this is in fact the case. They did not spell out in any detail how emails are comparable to actual legal counsel records.

What the council’s lawyers did make clear was their perception that the city is much like a private, for-profit business and that much of its information is proprietary and unfit for public scrutiny. “There are hundreds of millions of dollars at stake here!” implored Steven Lane in his arguments before the court.

“Who would want to do business, invest in a city that allows three years of City Council attorney records to be publicly posted on the Internet?” asked Mr. Lane. Ms. Washington’s supporters pointed out afterward that this is precisely why the Public Records Act matters – because there are hundreds of millions of taxpayer dollars at stake.

What was clear today in court is that the City Council is willing to pull out all the stops to prevent Ms. Washington from holding onto the records or disseminating them without the City Attorney’s Office first redacting and withdrawing information they see as unfit for public knowledge. “I wonder what the City Council is trying to hide?” asked Sam Jackson, a housing rights advocate and supporter of Washington, as he left the court this morning. “It may be that they’re trying to hide something other than information that is rightfully exempted.”