Editor’s note: The following announcement was just received by email. The rest of this story appeared in the March print edition of the Bay View. 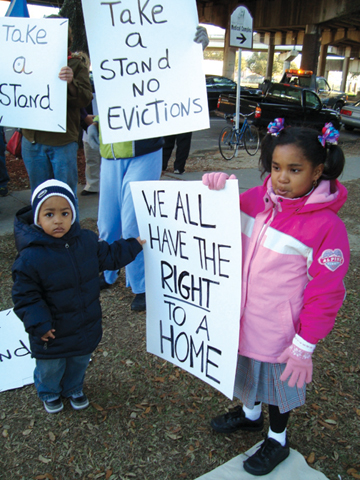 New Orleans – On Saturday, March 7, all those concerned about protecting the right to housing in New Orleans are invited to a rally and march to oppose demolition of the few remaining and renovated Lafitte Housing project units, as well as of the Lower Mid-City area to be razed for an LSU/VA hospital complex. The rally will begin at 1 p.m. at Orleans and Claiborne Avenues, then at 2 p.m. march down Claiborne, past Iberville to Canal Street and Mid-City

The announced evictions of residents from the remaining renovated units at Lafitte are scheduled to be completed on March 31, with demolition of their homes to follow. In Lower Mid-City, a large area is also slated for eviction and demolition to accommodate the proposed but not yet funded LSU/Veterans Administration medical complex. This is supposed to replace Charity Hospital, closed by LSU after its staff had thoroughly prepared it for reuse right after Katrina.

The rally and march is to condemn abandonment of well-built structures like Charity Hospital, the Lafitte project, and buildings in Lower Mid-City in favor of more expensive replacements, whose uncertain funding will delay, if not halt, their completion. The demolitions can only further strain New Orleans’ housing shortage, high rents, landlord difficulties, including renter evictions and homelessness, in a situation of rising unemployment.

The sponsors of the rally and march are C3 – a New Orleans peace and justice organization – MayDay NOLA, which works for justice for the underprivileged and working poor, and the Committee to Reopen Charity Hospital, as well as Stephanie Mingo and other Lafitte and Iberville residents. The public is cordially invited.

Last December, residents of New Orleans’ Lafitte public housing development were informed that they would be evicted on March 31, 2009. This decision came after the city made earlier promises that residents would be able to remain in the units until redevelopment. Many of the residents will be given Section 8 vouchers, but with rental prices rising an average of 40 percent since Hurricane Katrina, finding alternative housing will be extremely difficult.

In one of the worst economic crises this country has seen, and at a time where government officials should be seeking to secure housing for citizens, New Orleans city officials have decided to evict residents from stable, decent homes. The homeless rate in New Orleans has doubled since Katrina and for many of these residents finding affordable housing options will be next to impossible. This decision-making thwarts our international obligations, and makes little public policy sense given the current economic crisis.

As human rights and housing justice organizations working across the country, we decry this decision by the New Orleans’ government and call on Mayor Ray Nagin and the New Orleans Housing Authority to fulfill their promise and halt the evictions. We also call on HUD Secretary Shaun Donovan and President Barack Obama to place an immediate national moratorium on all public housing demolitions.

This statement is signed by 44 human rights and housing justice organizations from across the U.S. and three foreign countries. Tiffany Gardner is the director of the Human Right to Housing Program of the National Economic and Social Rights Initiative, 90 John St., Suite 308, New York, NY 10038, (212) 253-1771, http://www.nesri.org, tiffany@nesri.org.

Reps. Waters and Frank call for moratorium on demolitions

Last summer, on Aug. 13, 2008, Rep. Maxine Waters, chair of the Subcommittee on Housing and Community Opportunity for the U.S. House of Representatives, and Rep. Barney Frank, chair of the Committee on Financial Services, wrote to then HUD Secretary Steven Preston. Excerpts from that letter follow:

“We believe that the loss of public housing units has now reached epic proportions and further loss of units must be averted immediately for the sake of the nation’s low-income families.

“… A further decline in the number of public housing units exacerbates the affordable housing needs of our most vulnerable populations, including the elderly and disabled, and forces low-income families into unstable or unsustainable housing situations or homelessness.

“(W)e call on you to immediately cease approval of all demolition and disposition applications until legislation is enacted to reform this program.

“We look forward to working with you to implement this moratorium and to ensure that further public housing units are not lost.”

Rally against demolition of Lafitte

Since 80,000 rental housing units have been lost in New Orleans since Katrina, according to Louisiana Recovery Authority Executive Director Paul Rainwater, organizers of a Feb. 6 rally are asking that the federal Department of Housing and Urban Development, under its new secretary, rescind HUD orders to destroy the remaining units at the Lafitte public housing development.

These are recognized as well designed and architecturally significant by preservationists and were just recently renovated. The buildings are more solidly built that anything that can replace them. The much higher cost of replacing these units seems uncalled for and even problematical in the current credit crisis.

The protestors called for the preservation of what is left of all the four multi-family housing projects so far demolished, as well as rehabilitation of the Florida and Desire projects, the multi-family apartment buildings on Gentilly Terrace and in New Orleans East, and restoration and reopening of the closed parts of the Iberville project.

The New Orleans representative in a nationwide delegation visiting Congress and the new administration said they will present the need for affordable housing for low-wage workers, elderly, handicapped and homeless people, including those who have not been able to return to New Orleans after Katrina due to loss of their housing. The delegation will also propose to the House Committee on Housing, chaired by Congresswoman Maxine Waters, that one of its planned hearings on housing across the country be held in New Orleans.

Residents of public housing and supporters gathered in the cold outside of the Lafitte development on Friday, Feb. 6, rallying against evictions and demolition.

According to May Day New Orleans’ executive director Sam Jackson, residents at Lafitte are being evicted to make way for the final demolitions at that residential site. Lafitte residents are being shunted into Section 8 housing around the city, or else into the Iberville development. 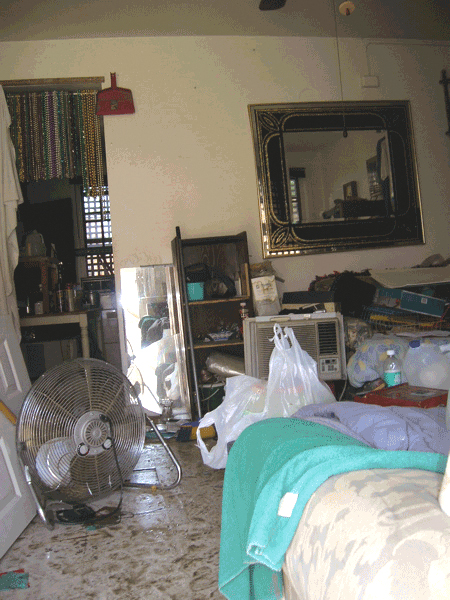 Jackson calls this a bad idea. “It’s going to cause more strife in Iberville and be a major burden on those families living in the Lafitte. Ibverville’s a good place. The buildings are solid. They should have never torn them down like this.”

Jackson, a resident of B.W. Cooper, is heading to Washington, D.C., next week along with other local housing activists for a nationwide coalition of housing advocates. “We’re going to meet with New Orleans’ congressional caucus, including Cao, and also representatives like Maxine Waters who have been helping us fight for affordable housing since Katrina.”

The protest at Lafitte comes more than a year after the climactic City Council vote to demolish public housing in New Orleans, a choice that Jackson and other public housing residents adamantly opposed. “It’s made it much more difficult for families to come back home. It has also increased rents and stressed out families needlessly,” Jackson says.

Ultimately Jackson and others are hoping for the passage of S. 1668, The Gulf Coast Housing Recovery Act, or similar legislation that would put money and direction behind the construction of worker housing in the city. The original legislation was blocked in the Senate by David Vitter, even though it had a majority support. Vitter’s opposition seems to have been based on preventing the construction of workforce housing in New Orleans.

Sam Jackson promises more action in the coming year. “People beyond just public housing developments are facing evictions. Tough times are ahead and we have to get together to protect the community and keep our streets safe. Good affordable housing for everyone is an excellent first step.”

On the fifth anniversary of Katrina, displacement continues