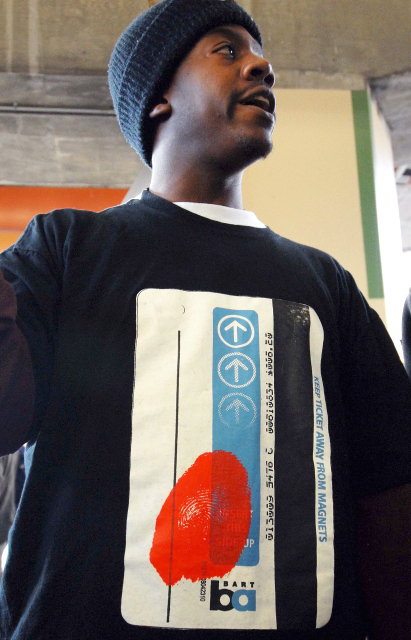 Early New Year’s morning phones in Hayward and Oakland were ringing: “Wake up, wake up. Something’s happened to the boys.” Calls were going back and forth between the families of 22-year-old Oscar Grant and his friends – families so close all the women were called “aunties.” The youth had gone to San Francisco to celebrate. “What the hell had happened?”

The hellish, heart-tearing news soon came. Oscar, their lifelong friend, the one they had played baseball with, gone camping and swimming with, was dead. Shot in the back by BART police officer Johannes Mehserle.

The police murder, caught on cell phone videos, has shocked people. In its wake, the system – the police, their lawyers, the district attorney, the City of Oakland, BART and the media – have spun all kinds of explanations: The killer-cop was a poorly trained rookie; he meant to go for his taser; he was scared; he’s a lone racist; it was a terrible, unexplainable mistake.

The system didn’t treat the cops’ actions on Jan. 1 as intolerable exceptions to what they’re supposed to do; instead, the system’s institutions moved to cover up and legitimize this violence and let all the cops but one go free. All this – and the whole nationwide epidemic of police brutality and murder – point to the cold truth that brutalizing, terrorizing and, yes, murdering oppressed people – especially Black people – is what the police are supposed to do – not to “protect and serve,” but to keep people down.

At about 2 a.m., the BART train operator supposedly radioed that there was a fight on the train. She didn’t see any individual involved, and many would question how bad a fight it could have been: No “victims” ever came forward and no fighters were ever identified by any witness. Some said there had been a short shoving match which was quickly broken up. Everyone agrees: The atmosphere inside the train packed with revelers was calm when it pulled into the Fruitvale station, located in a mainly Black and Latino proletarian neighborhood in Oakland.

BART cop Tony Pirone, an ex-Marine, was on the platform and he immediately began targeting Black and Latino youth – although he had no description of anyone in the reported “fight.” When four of Oscar’s friends get off, Pirone let three of them leave but grabbed one. Then, yelling and cursing, Pirone banged on the train window and pointed his taser at two young Black men – Oscar and his friend Michael – and ordered them off the train. 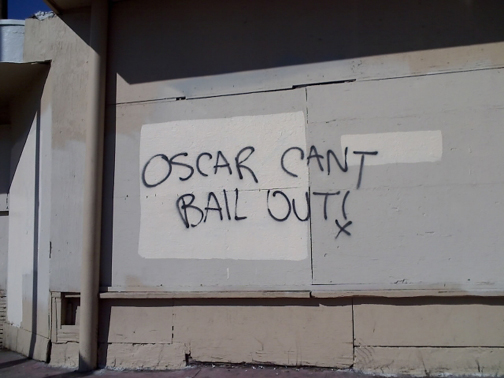 As soon as Michael and Oscar stepped off the train, they were hammered. Pirone lunged at Michael, grabbed him by his dreadlocks and slammed his head, face down, on the concrete, leaving a large cut on the bridge of his nose. Michael’s friends started to yell, “Why are you doing that?” “What did we do?”

Then Pirone grabbed Oscar and hustled him to a wall. Soon other cops came and threatened more youth with their tasers, yelling the “N” word at the young men, calling them “motherfuckers.”

When three of Oscar’s other friends got off the train, they too were held against the side of the train by Officer Marysol Domenici who thrust a taser at each one, tapping one between the eyes with it.

Another video clip, not shown on TV until weeks after the murder, shows Pirone suddenly stride by Michael, who was handcuffed and lying on the cement, across the platform toward Oscar, hitting him hard in the face, causing his head to snap back.

Oscar fell to a sitting position and put his hands up in submission gesture. One video shows that Pirone then aimed his taser at all three youth in front of him. Although no media has reported it, the video then shows Mehserle striking the youth seated next to Oscar about three times and then handcuffing him. Oscar rises to his knees, protesting.

Pirone then pushed Oscar’s face to the pavement, still threatening to tase him. Mehserle straddled Oscar’s back, pulling his arms back. Pirone dug his knee into Oscar’s neck. People on the train started to shout, “That’s fucked up. Let him go!” Witnesses heard Oscar cry out in pain and tell Pirone, “I have a 4-year-old daughter; don’t tase me.” 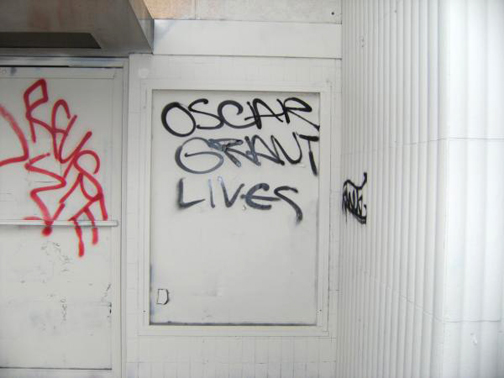 Oscar and his friends were fully in “police control,” not resisting. The video shows Oscar lying face down on the ground with both hands behind his back, barely moving, if at all.

But Pirone and Mehserle didn’t stop; they escalated. Pirone claims he heard Mehserle say to him, “Tony, get away. Back up,” a chilling statement pointing to a cold, calculated decision. With Pirone still on Oscar, Mehserle wrenches his gun from its holster and shoots Oscar Grant at close range – in the back.

Mehserle’s attorneys suggest he was going for his taser and made a horrible mistake, while some media “experts” have speculated about how stressed Mehserle must have been. This is absurd. The X26 taser issued to BART cops is plastic and weighs seven ounces. The Sig Sauer that killed Grant is metal and weighs 30 ounces unloaded – more than four times as much as the taser, and feels completely different. 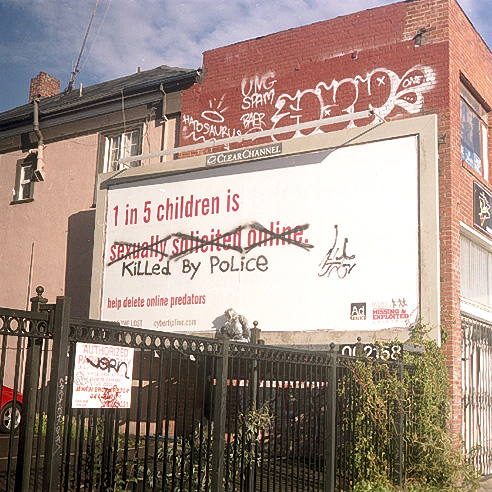 Videos also show that neither Mehserle nor any of the other six police were “stressed out,” horrified or regretful about having murdered Oscar. As Oscar’s friends, still handcuffed, yelled for the police to help Oscar, the cops told them to “shut the fuck up” and said if they weren’t silent, they wouldn’t call an ambulance.

No cop moved to administer first aid. Instead a video clip shows them flipping Oscar over, jerking him up and down, handcuffing him and leaving him to bleed out on the platform.

The cops weren’t in shock or disarray: They immediately began a cover-up. No cop radioed that a shooting had occurred. Pirone ordered the train operator to leave the BART station, taking all the witnesses away – instead of getting their names. As the train departed, Domenici ran after people, threatening them and trying to grab their phone cameras.

After the shooting, five of Oscar’s friends were detained in the BART police station for more than five hours. Sources close to the families say that the youth heard BART police laughing, saying, “We got a good one tonight.”

All this points to the reality that such brutality is ROUTINE for these pigs, including trying to cover it up afterward, and that murdering one of the people can be a cause for laughter and celebration.

What about the “higher-ups,” BART officials, the City of Oakland, the courts? BART officials express sorrow for the killing, yet their own “investigation” made no recommendations, they’ve reprimanded none of their police, and they claim there’s no BART surveillance video showing what happened, despite the fact that BART trains and stations all have cameras in them. BART Police Chief Gee wrote a memo to his troops, explaining how to send money to Mehserle while he was in jail.

Oakland’s DA didn’t arrest Mehserle for nearly two weeks – and then only because people rebelled; Pirone – who initiated the brutality that led to murder and could have been charged with felony murder – has not even been arrested. Nor have any of the other cops. And in its first “prosecution” brief, the DA reiterates the police’s version of events, including repeating Pirone’s claim that Mehserle thought Oscar was going for his waistband – and possibly a gun. Oscar Grant was unarmed.

All the police violence leading to Oscar’s murder has been treated as normal, “no big deal,” by the authorities and media. And in this system, police violence IS routine and systemic. Take Oscar and his friends: “These youth are used to being accosted by the police,” said one of the aunties. “It’s been going on since they were 13 years old.”

Another mother showed Revolution pictures of the wounds her son received after a beating by Hayward police several years ago, which broke teeth: He had to be treated in the hospital, including for severe taser burns on his back.

This system is showing that it will do everything it can to protect the ability of its police to brutalize, terrorize and murder the people. Enough is enough!

There is a real need for continued and increased protest and independent journalistic investigation into the murder and its cover-up. We cannot allow this kind of blatant murder to be “routinized,” excused or tolerated.

On Sunday, March 22, 2-6 p.m., Revolution Books and the Bay Area Revolution Club are holding a People’s Tribunal on the Murder of Oscar Grant and the Nationwide Epidemic of Police Brutality that will indict Oscar Grant’s killer and “the whole damn system.” It will be held at Calvin Simmons Middle School Cafeteria, 2101 35th Ave., south of Fruitvale, east of Foothill Boulevard, Oakland.

The next day, Monday, March 23, 9 a.m., is Mehserle’s preliminary hearing at the Rene C. Davidson Courthouse, 1225 Fallon St., Department 11, Oakland. BAMN (By Any Means Necessary) is sponsoring a rally at 8 a.m. outside the courthouse.

Both are key junctures in this battle, and big outpourings of people are needed at both.

Links to videos of the events leading up to, and the murder of Oscar Grant are available at http://www.ktvu.com/news/18426590/detail.html.