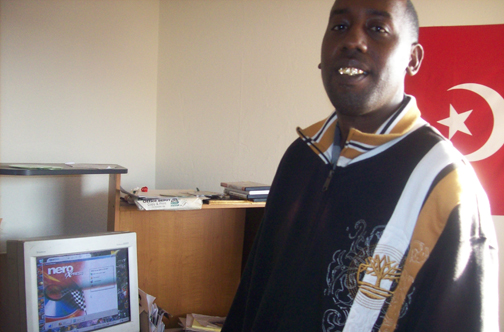 A lot of artists call themselves “political,” “revolutionary” and “conscious” artists but very few, including the internationally known ones, use their art to benefit people’s street campaigns, political and social struggles. In the Prisoners of Conscience Committee, the organization that I am of the minister of information of, we have the Code of Culture, where we ask artists to make their art come to some point of unity with the struggle and our organizing, concretely. See, it’s good if you say, “Free Mumia!” “Free AP!” “Free Imam Jamil!” and “Free Troy Davis!” on your record, but it is better if you are tied into the campaigns directly, so that these names and campaigns can get songs made about them, to really inform listeners to who these people we are fighting for are, and how we can help them.

That is what I respect most about East Bay Politix; that’s what they have done with the “Free the SF 8” album. Every song is politically inspired by this bogus case where eight men are on trial for killing a San Francisco police officer in ‘71.

Two years after the SF 8 were indicted the trial is still underway, which makes an album like this that much more important for everybody to support that supports the eight – or anyone being locked up on phony charges. Why? Because a lot of times political cases attract the same crews of activists, but with an organizing tool like this album, the ears of younger people and other music lovers will be opened to finding out who the SF 8 are. Now that’s real political artistry.

I got a chance to sit down with my music-making comrade, so he could share some of the thoughts that went into making this project. Check it …

MOI JR: Can you talk a little bit about why you got involved in the Free the SF 8 campaign? What struck you about this case?

Sinista Z: We got involved with the Free the SF 8 case because we think that what the state is trying to do to these brothaz is wrong. The things that the police have already done to these brothaz, such as torturing them, was wrong. Pinning false charges on people has been going on far too long, especially when it comes to Black activists.

MOI JR: When did it get to the point when East Bay Politix decided to do an album about the SF 8 case?

Sinista Z: East Bay Politix is all about making music about our struggle as a people, and this case clearly shows that there is a war against our community. So we decided to do an album and comic strip about the case. Our interactions with the POCC taught us to tie our music in with campaigns, in the interests of the people.

MOI JR: Who does the album feature and what are the specific songs about?

Sinista Z: The album “Free the SF 8” has songs about organizing to rebel against this system of hatred that seems to hate us especially. Produced by Sinista Z featuring East Bay Politix: Sinista Z, Down2earfth, Ras Ceylon with special guests Murda Ma, Richport the Savior, Baysho Bizness, Mommi Digital, Nemis B’Nai, The Fam and many others. “Free the SF 8” will be released in early April.

MOI JR: What else is East Bay Politix working on?

Sinista Z: Also we are about to release the new East Bay Politix comic book, “Prepare 4 Conquest,” that should be coming out this summer. This album is about our resurrection and introduces the known world to Sinista Z and Down2earfth. You can hear the hot single off the upcoming “Prepare 4 Conquest” album called “Naturally Artificial” at myspace.com/sinistazofebp.

MOI JR: How do people get in touch with you?

Rebel of the underground: an interview with RodStarz of Rebel Diaz