Don’t miss ‘Put down the gun and pick up the youth,’ fundraiser for after-school programs, Saturday, April 18, 5 p.m., at the Oakland Leaf Foundation, 1434 34th Ave. at International, Oakland, about one block from the Fruitvale BART 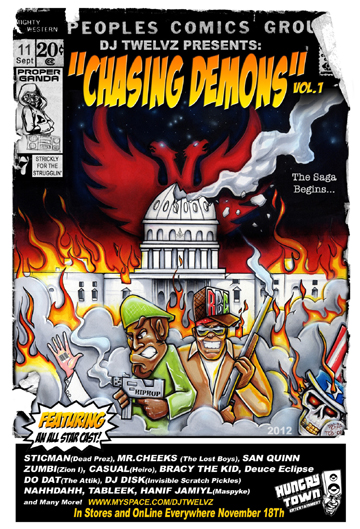 DJ Twelvz is one of the up and coming dj’s in the Bay Area who has one foot in conscious circles and the other within street rap. In my opinion, this is where the movement needs to go. There should not be a disconnect between people who want to help the community and those who need that help.

DJ Twelvz is one of the people who has not said a whole lot to me about this, but his actions have shown me that he sees the contradiction in the community, and at least the crews that he associates with is working to remedy it. Straight out of Chicago, born Mexican and Black, DJ Twelvz is definitely not your average dj on the wheels of steel.

He’s the homey to kick it with in the studio, but more importantly he has a lot of views on society that we should use as food for thought. Check him out.

MOI JR: Can you talk a little bit about your newest project, “Chasing Demons”? How was it conceived? And how did you pick the artists that you wanted to be on it?

DJ Twelvz: So “Chasing Demons” was really inspired by the closing of East Oakland Community High School. It was a school that I taught music at for two years. The school district shut the school down in its second year.

The community was an extremely close, loving community that really served its youth to its best abilities and the man just came in and shut it down, so it inspired me to run up on the system in this LP. Plus being just sick of institutionalized racism – in Hollywood, law enforcement, the corporate world, government, all of that. So I began working on the project. I picked the emcees that I felt was really dope enough to speak on some of the concepts.

MOI JR: What has the response to your album been like?

DJ Twelvz: Well, I think it’s kind of a controversial album, so some people see the art work and their jaw just drops. I speak on race in a comedic fashion that may offend some ignorant people. For the most part I have a good response from it. Most people have different favorite songs on it. I’m glad it dropped and can’t wait for my next one to drop in late ’09, early 2010: “black ops.”

DJ Twelvz: I been a DJ since I was almost 10 years old. I’ve been a DJ in the Bay about four years.

MOI JR: Can you talk a little bit about your work with Mogul Media? When I come by the studio you are usually there with the rest of the regulars: Kaz Kyzah, Mahasen, Damon Jamal and the likes.

DJ Twelvz: I do a lot of the engineering in the studio. I help out with the mixing and mastering when I can, and Kaz and I have a new street album/mixtape we did together dropping real soon, called “The Ultimate Hustle: Life in the Sunshine.” I work with everyone over there. 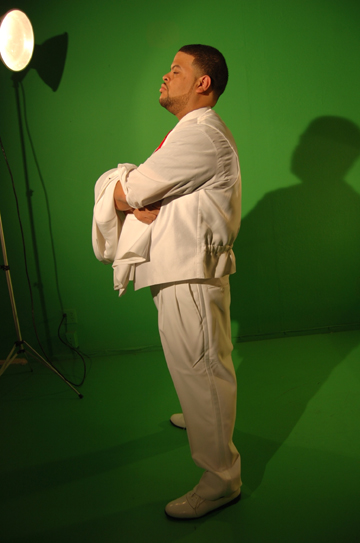 Big shout out to Damon Jamal and In Yo Face films, Mahasen is the most under-rated female emcee/vocalist in the Bay. She go. My boy Stevie Joe got mad swag too. I like that camp a lot. They’re crazy like me.

MOI JR: Can you talk a little bit about the event that you organizing, which is coming up?

DJ Twelvz: I also am the community relations coordinator for the Oakland Leaf Foundation and there has been a lot of budget cuts for after-school programs with the economy in its current condition, so we have had to come with other ways to raise funds to support the after-school programs and arts in schools.

There has been a lot of violence lately in the community with the murder of Oscar Grant, Lovelle Mixon and other Black males being murdered in the streets every day. So I wanted to do a event that was focusing on peace and unity in our community with all peoples, but yet focuses on the youth, ‘cause they are the ones really suffering from this social and economic climate.

So everyone 21+ is invited to the youth after-school program fundraiser, “Put down the gun and pick up the youth.” It features performances from the Conscious Daughters, Rico Pabon, T-Kash, hosted by Do dat of theattik and me and my boy Mr. Knowitall are going to do a special set from our new album, “My Love for Her …” It’s this Saturday, April 18, at the Oakland Leaf Foundation, 1434 34th Ave. at International, Oakland. It about one block from the Fruitvale BART station. The event start at 5 p.m., $5 admission.

MOI JR: What is the last thing that you want to say to Bay View readers?

DJ Twelvz: It’s now or never: 2012 is coming. Let’s stop all the dumb shit! And get my album, “Chasing Demons,” Volume 1, available on online stores everywhere and at Amoeba and Rasputin’s etc.