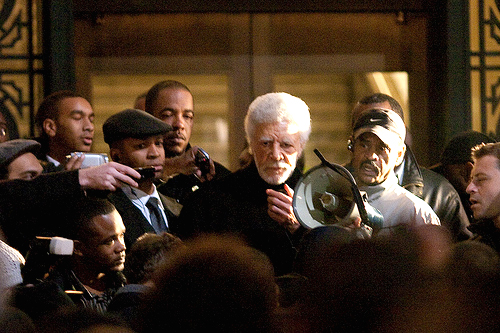 This perspective might be very hard for many sociopolitically naive white people to read. But it’s very important to understand the sheer depth of negative feelings that many people of color – even those with no criminal record – have against the police. This is due to lifelong and often unpredictable, almost always potentially life-threatening negative experiences, from petty to lethal, that they or their loved ones and friends, as people of color, have had from the police.

Most people of color know that the cops, and police departments as institutions, historically represent the street enforcement arm of white American racism. Indeed, the police were born out of the white slave patrols.

People of color and conscious white people have seen how cops have wantonly brutalized many members of the Black and Brown community – the police murder of Oscar Grant (who was brutally assaulted by more than just the one potentially legal “sacrifice” cop who murdered him) being just the latest in a long series of notorious cases that have become epidemic in the Bay Area and all across the nation. Such is the arrogance of police power that sometimes this police abuse reaches other communities: Asians, members of the Arab community – recently in San Francisco, women and children at a peaceful political march – and peaceful political protesters of all ethnicities.

Relatively recently, in Oakland, 11 cops were fired for falsifying a whole series of search warrants to bust into people’s homes. And the OPD chief of internal affairs was put on leave, pending an investigation for his having viciously beaten a Latino suspect in his custody to death years ago.

In the weeping and mourning over the deaths of the four cops killed on March 21, how soon we forget the Oakland Riders case: The political damage control performed there kept the focus of the investigation just on those specific corrupt street cops but did nothing to clean up the department in whose culture and corruption they were spawned.

It is said that Oakland alone in the Bay Area pays out – at least averaged over time – about $2 million a year in police brutality cases – and many more millions soon yet to come. Surely that is money that could be spent on education and job training. 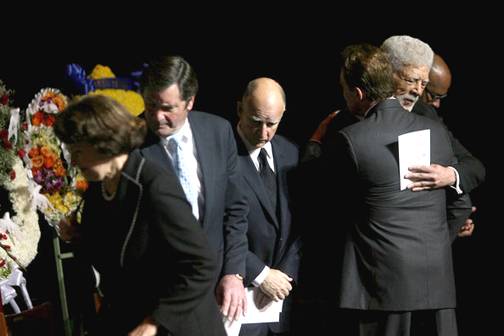 American flags were officially flown at half-staff for those killed cops – summarily tried, sentenced and executed in the streets, just like they do with people of color. But no flags were flown at half-staff over City Hall by the Black mayor of Oakland for Oscar Grant or any of the other innocent minority victims of police summary executions.

Mayor Ron Dellums (and Congresswoman Barbara Lee) took a week before he (or she) said anything about Grant, and even then only in the most indirect and tepid terms, and Dellums only after his finally being confronted by the people in front of City Hall. (See YouTube videos: “Davey D Rants on Mayor Ron Dellums“; “Oakland Rebels, Mayor Ron Dellums Gets Confronted“; “OG3: Oscar Grant Tribute“; “March of Stolen Lives, Part 1” (of 3) and “Jerry Amaro Family Sues Oakland Police for $10 Million.”)

Yet Dellums immediately, personally and vociferously condemned the killings of the cops, and without any prompting by citizen demands. (And at least one cop’s family still wouldn’t let Dellums speak at the funeral. Good.) So much for “the new age of Obama” and “change we can believe in!” So much for the illusion, mindlessly repeated – wherever there is a camera or a microphone – by some of those docilized middle- and upper-class negroes who always want to gain white people’s approval as “the good Blacks,” that “all human life is equal!”

“The good Blacks,” especially top Black politicians, will at best once again call for some kind of touchy-feely police “sensitivity training” and “dialogue” – but never for the best training: quick, effective prosecutions, sound convictions and serious criminal sentences against rogue and killer cops. But since when, right from this country’s founding when it was genocidally and otherwise horrendously established upon generations of millions of Red, Black, Yellow and Brown lives, has all life ever “been equal” in the history of America?

At least a couple of the local TV news stations have shown a servile Rev. Philip Ellinberg, some negro (probably what we Blacks call a “jackleg / bootleg preacher,” since he seems to be absent from any telephone or online directory listings) who was supposed to (and apparently did) sing for Massa at the killed cops’ funeral. Where was he at Oscar Grant’s funeral – or those of any other police-executed minorities? Where is he at the Oscar Grant Movement meetings held almost every Saturday afternoon in Oakland at the Olivet Missionary Baptist Church?

Where were the flags at half-staff, much less the state and mass media-covered funeral for Oscar Grant and all the other unarmed, innocent victims of killer cops’ vigilantism and street executions? All Bay Area people have to do is to look at all the names on the boards of the Stolen Lives Project (started by Danny Garcia) and its portable mural of names: men, women – even grandmothers – and kids shot to death, sometimes in a hailstorm of bullets, even against innocent people just minding their own business, choked to death, smothered to death, truncheoned to death, and, of course, sustain-tasered to death – and not those unhandcuffed, little, quick, light two-second tap shocks cops sometime demonstrate on another cop – with two cops on both sides carefully catching the one as he buckles – for television PR purposes: “See? It doesn’t really hurt.” Do you think that any of the Bay Area cities would even fly their flags at half-staff for just one day for, collectively, ALL of those victims of police executions?

This is especially noteworthy given that a cop who was wounded on March 21 – but not killed – by Mixon was Sgt. Pat Gonzales, who narrowly escaped karmic justice, but who, as a repeat offender, last shot a young Black man, Gary King Jr., in the back and killed him. The media lauds this cop while his repeated brutality and violence are ignored.

And cops up in Sonoma county even went and gratuitously killed the biracial kid, Jeremiah Chass, right in his home driveway, after his parents made the mistake of calling the cops to help calm down their very well-liked son, who was momentarily in psychological crisis. Over a thousand people attended Jeremiah’s memorial, but you didn’t see that on TV.

Said Jeremiah’s aunt to me, “It took three hours to get through all the stories and comments from his classmates and friends on how he touched their lives. He WAS well liked, kind, gentle and with a spirit and wisdom well beyond his years. And yes, you are right … we won’t see this on TV. To this day, the claim [by Sonoma cops] is that it was a justified killing and even a ‘heroic’ act.”

There’s a sarcastic old saying, known among Blacks, “When the White Man is hurt, evvverybody must cry.” But millions of people aren’t cryin’ over four killed cops – including even many politically conscious white people – and AREN’T MOURNING along with that state mass propaganda funeral. While the cops and the media come up with suspiciously last-minute – and technically unconfirmed – stories to try to tell us just “how bad” Lovelle Mixon was (how about research into those dead cops’ background to see how abusive and dirty they were?), many of us see it as karmic justice, regardless of what person killed the four – and almost five! – cops, all in a brief afternoon’s work.

The cops called Lovelle Mixon “a cold-hearted individual who doesn’t have any regard for human life.” Well, the cops should know: They too, often against minorities, behave exactly the same way.

Joseph Anderson is a resident of Berkeley, an occasional writer of sociopolitical commentaries in various publications and a longtime progressive political activist.