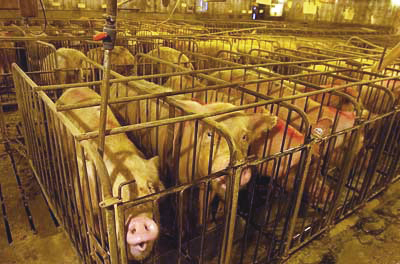 A swelling number of scientists believe swine flu has not happened by accident. No, they argue this global pandemic – and all the deaths we are about to see – is the direct result of our demand for cheap meat. So is the way we produce our food really making us sick as a pig?

At first glance, this seems wrong. All through history, viruses have mutated, and sometimes they have taken nasty forms that scythe through the human population. This is an inescapable reality we just have to live with, like earthquakes and tsunamis.

But the scientific evidence increasingly suggests that we have unwittingly invented an artificial way to accelerate the evolution of these deadly viruses – and pump them out across the world. They are called factory farms. They manufacture low-cost flesh, with a side-dish of viruses to go.

To understand how this happens, you have to compare two farms. My grandparents had a pig farm in the Swiss mountains, with around 20 swine at any one time. What happened there if, in the bowels of one of their pigs, a virus mutated and took on a deadlier form?

At every stage, the virus would meet stiff resistance from the pigs’ immune systems. They were living in fresh air, on the diet they evolved with and without stress – so they had a robust ability to fight back. If the virus did take hold, it would travel only as far as the sick hog could walk. So the virus would then have around 20 other pigs to spread and mutate in – before it would hit the end of its own evolutionary path, and die off.

If it was a really lucky, plucky virus, it might make it to market – where it would come up against more healthy pigs living in small herds. It has little opportunity to fan out across a large population of pigs or evolve a strain that could be transmitted to humans.

Now compare this to what happens when a virus evolves in a modern factory farm. In most swine farms today, 6,000 pigs are crammed snout-to-snout in tiny cages where they can barely move and are fed for life on an artificial pulp, while living on top of cess-pools of their own stale feces.

Instead of having just 20 pigs to experiment and evolve in, the virus now has a pool of thousands, constantly infecting and re-infecting each other. The virus can combine and recombine again and again. The ammonium from the waste they live above burns the pigs’ respiratory tracts, making it easier yet for viruses to enter them. 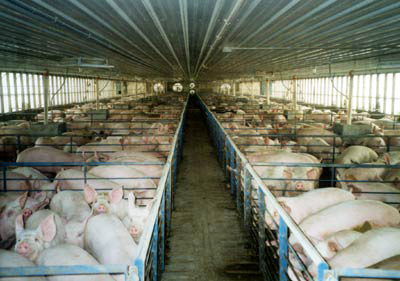 Better still, the pigs’ immune systems are in free-fall. They are stressed, depressed and permanently in panic, making them far easier to infect. There is no fresh air or sunlight to bolster their natural powers of resistance. They live in air thick with viral loads, and they are exposed every time they breathe in.

As Dr. Michael Greger, director of public health and animal agriculture at the Humane Society of the United States, explains: “Put all this together, and you have a perfect storm environment for these super-strains. If you wanted to create global pandemics, you’d build as many of these factory farms as possible. That’s why the development of swine flu isn’t a surprise to those of us in public health community. Back in 2003, the American Public Health Association – the oldest and largest in world – called for a moratorium of factory farming because they saw something like this would happen. It may take something as serious as a pandemic to make us realize the real cost of factory farming.”

Many of the detailed studies of factory farms that have been emerging in the past few years reinforce this argument. Dr. Ellen Silbergeld is professor of environmental health sciences at Johns Hopkins University. She tells me her detailed on-the-ground studies led her to conclude there is “very much” a link from factory farms to the new, more powerful forms of flu we are experiencing. “Instead of a virus only having one spin of the roulette wheel, it has thousands and thousands of spins, for no extra cost. It drives the evolution of new diseases.”

“It may take something as serious as a pandemic to make us realize the real cost of factory farming.” – Dr. Michael Greger

Until yesterday, we could only speculate about the origins of the current H1N1 virus killing human beings – but now we know more. The Centre for Computational Biology at Columbia University has studied the virus and found that it is not a new emergence of a triple human-swine-bird flu virus. It is a slight variant on a virus we have seen before. We can see its family tree – and its daddy was a virus that evolved in the artificial breeding ground of a vast factory farm in North Carolina.

Did this strain evolve, too, in the same circumstances? Already, the evidence is suggestive, although far from conclusive. We know that the city where this swine flu first emerged – Perote, Mexico – contains a massive industrial pig farm and houses 950,000 pigs. 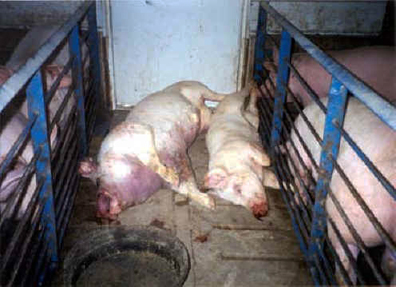 Dr. Silbergeld adds: “Factory farms are not biosecure at all. People are going in and out all the time. If you stand a few miles down-wind from a factory farm, you can pick up the pathogens easily. And, like in the U.S., the manure from these farms isn’t disposed of according to any regulations, even though we know viruses can remain alive in it for more than a month. They can just sit in cesspools. The viruses can be transmitted from there by flies.”

It’s no coincidence that we have seen a sudden surge of new viruses in the past decade at precisely the moment when factory farming has intensified so dramatically. For example, between 1994 and 2001, the number of American pigs that live and die in vast industrial farms in the US spiked from 10 percent to 72 percent. Swine flu had been stable since 1918 – and then suddenly, in this period, went super-charged.

How much harm will we do to ourselves in the name of cheap meat? We know that bird flu developed in the world’s vast poultry farms.  And we know that pumping animal feed full of antibiotics in factory farms has given us a new strain of MRSA. It’s a simple, horrible process.

The only way to keep animals alive in such dirty conditions is to pump their feed full of antibiotics. But this has triggered an arms race with bacteria, which start evolving to beat the antibiotics – and emerge in the end as pumped-up, super-charged bacteria invulnerable to our medical weapons. This system gave birth to a new kind of MRSA that now makes up 20 percent of all human infections with the virus. Sir Liam Donaldson, the British government’s chief scientist, warns: “Every inappropriate use in animals or agriculture [of antibiotics] is potentially a death warrant for a future patient.”

Of course, agribusinesses is desperate to deny all this is happening: Their bottom line depends on keeping this model on its shaky trotters. But once you factor in the cost of all these diseases and pandemics, cheap meat suddenly looks like an illusion.

We always knew that factory farms were a scar on humanity’s conscience – but now we know they are a scar on our health. If we carry on like this, bird flu and swine flu will be just the beginning of a century of viral outbreaks. As we witness a global pandemic washing across the world, we need to shut down these virus factories – before they shut down even more human lives.

Johann Hari is a writer for the Independent newspaper. He has reported from Iraq, Israel/ Palestine, the Congo, the Central African Republic, Venezuela, Peru and the U.S., and his journalism has appeared in publications all over the world. In 2007 Amnesty International named him Newspaper Journalist of the Year. To contact him, email johann@johannhari.com or visit his website at JohannHari.com. This column previously appeared in the Independent and Huffington Post.