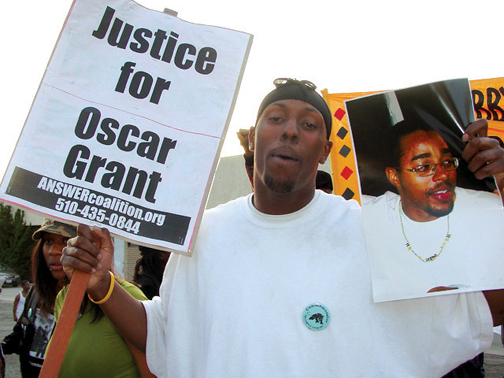 The Oakland Police Department suffered a self-inflicted gunshot wound to the foot when it further racialized the March 21 shootings by rescinding Oakland Mayor Ron Dellums’ invitation to speak at the public funeral of the four officers who were gunned down.

Initial reports indicated that at least two of the families of the slain officers requested that Dellums not be allowed to speak at the March 28 public event.

One reason given was that The Families didn’t want the funeral to become merely a platform for politicians.

Since the major media outlets, in their rush to canonize the dead officers, have been negligent in following up this story, one is only left to speculate why Dellums was excluded.

But there are other concerns as well.

Casual observers of the Oakland political scene will say that even though Mayor Dellums has led the a fight to get more Oakland police hired, relations between him and the department are not good.

This is hardly surprising, especially to those who remember Dellums’ close relationship with the Black Panther Party decades ago.

Even so, Dellums recently was in the forefront of the struggle to have more police cadets hired and worked closely with wide sectors of the Oakland law and order support community until those good citizens realized their property taxes might go up in order to pay for the increased levels of police protection.

Then much of Dellums’ support for that measure seemed to evaporate. Given all the history and the internal politics that likely exist, the OPD and The Families had every right to rescind Dellums’ invitation. No problem there.

But here is the larger issue.

If Dellums is to be excluded from a public memorial service, why not ask another African American elected official to speak?

Congresswoman Barbara Lee was in attendance. She wasn’t asked to fill in.
State Assembly Member Sandre Swanson was there. He was not asked.
Nor was Keith Carson, member of the Alameda County Board of Supervisors.

Instead, and despite The Families’ disingenuous protests they didn’t want the event to become a political platform, four white politicians, Attorney General Jerry Brown, Gov. Arnold Schwarzenegger and Sens. Dianne Feinstein and Barbara Boxer received the blessings of the OPD and The Families.

Nor was a Latino or Asian elected official asked to participate.

By excluding elected officials of African American descent, while including whites only, the OPD and The Families racialized the shootings in a way the ultra-left could only have dreamed.

This is not to say African Americans didn’t participate in the memorial, but all were members and leaders of the OPD.

Is the OPD so insulated from the communities they attempt to patrol they think they are representative of those communities? Are they that out of touch?

Are the major media outlets so out of touch they think the people who attended the public memorial represent the masses of those with whom the police come into contact?

Here is an instructive story.

An on-line journalist from the Bay Area was attending a major Hip Hop conference in Texas. When television news stations there broadcast news of the four OPD members being shot and killed, cheers erupted.

That tells you all you need to know about the great racial divide that exists in this country – a divide apparently unseen by the OPD, The Families and white America in general.