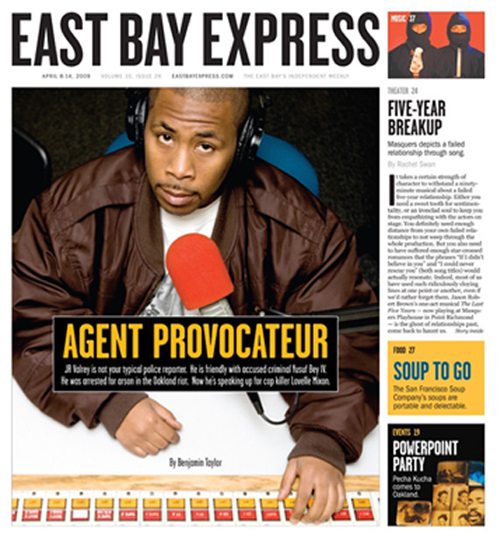 KPFA, the bastion of radical radio, will be celebrating its 60th birthday this week. It is almost cinematic looking at the issues this left-leaning radio station will be mired in at the same time it will be blowing out its candles.

For 60 years, KPFA has been legally and morally committed to achieving the Pacifica mission of racial understanding, yet here it is 2009 and still there’s no Black public affairs show anywhere on its scheduling grid! And yes, the station is located right in Berkeley on Martin Luther King Jr. Way, only blocks from where the Black Panther Party was founded.

If the station is so radical, why doesn’t it have a Black public affairs show? Whites have Democracy Now, which comes on twice daily, and Against the Grain. Latinos have La Raza Chronicles and La Onda Bajita, Asians have APEX Express and American Indians have Bay Native Circle.

“Shut up and keep dancing” is what KPFA’s management team is telling the Black community by giving Black programmers access only to music slots – with the exception of Walter Turner’s Africa Today, which is expected to cover the Black world in one hour a week.

The black hole created by this lack of a Black public affairs show has yawned wide and deep in recent months as the rumblings of revolution in Black Oakland have grabbed headlines and prime time around the country … but barely a whisper on KPFA. A few brave souls have broken the implicit taboo against covering the police beating of KPFA programmer Nadra Foster in the KPFA studios in August of 2008, but not many and not often. Nadra is still fighting false charges that the current management conjured up, but you would never know that listening to the station.

For millions tuned into mainstream media, the videotaped police murder of Oscar Grant and the rebellions that followed ushered in the New Year with a vivid view of the police war on Black people. Commercial media dug up evidence and ran probing interviews day after day, week after week, vying for listeners, viewers and readers hungry for more. To KPFA management apparently, though, the story was hardly newsworthy.

In the aftermath, community organizing of all kinds with a fervor not seen since the days of the Panthers should be finding a forum at KPFA, but it’s not. Police retaliation against the journalist best known for his coverage of police terrorism, Minister of Information JR, by brutally arresting him and charging him with a felony at the first rebellion, was covered by all the other Pacifica stations around the country but barely mentioned at KPFA, even though he’s one of KPFA’s many unpaid staff members.

The next battle in the police war against Black Oaklanders, ending in the tragic murder of Lovelle Mixon and four police officers, once again gripped the national media while leaving KPFA largely speechless. Minister of Information JR’s Block Report interview with Mixon’s family was the only coverage on the daily prime time show Flashpoints.

The truth is, for this middle-aged Black woman who grew up in Richmond and San Francisco and now lives in Oakland, the Block Report is the only reason I contribute to KPFA fund drives. No one else speaks to me about issues that are on my radar. I just learned from a recent hit piece in the East Bay Express – the cover story no less – that the Minister of Information JR, who reported on the KPFA airwaves on all of these cases, is a volunteer with no regular time slot.

The East Bay Express article says that his Block Reports, which cut through racial barriers to fulfill the Pacifica mission of racial understanding better than any show I know, are “sporadically” played on Flashpoints, and I occasionally hear him presenting issues of concern on the shows Transitions on Traditions and Hard Knock Radio. I looked on the KPFA website, though, and couldn’t find him mentioned anywhere.

By ignoring one of the best Black journalists on the West Coast, one who can break down the most complex and controversial issues so that people of all colors can understand and discuss them productively and who emboldens those he interviews to speak their hearts and minds, revealing the pain of injustice that fuels racial conflict, KPFA is reviling the Pacifica mission. Block Reports, on the rare occasions I hear them on KPFA, are to me an oasis, a safe space where I know Black people’s intelligence and the issues we care about will be aired fairly and respectfully.

Today’s Chronicle, in a front page story noting KPFA’s 60th birthday, reported that this powerful station, with a signal that reaches the millions of people who live in the northern third of California, is currently drawing only about 150,000 listeners a week. “Broadening the audience, particularly among younger listeners,” is the goal, according to station management.

I know who can best help KPFA achieve that goal. I see the young people in my neighborhood jump to tune in KPFA whenever they hear a Block Report is coming on. Why can’t KPFA management see the solution within their grasp? Why are they treating JR like a leper when it comes to giving him and our community the time slot we want?

When a Black man is president of the United States and an East African woman is general manager of KPFA, is a Black public affairs show too much to ask for?

As KPFA turns 60, I’m going to be thinking hard about whether I’m respecting myself by supporting a station that some people in the Black community have been calling “Apartheid Radio.” Wouldn’t I be paying to be discriminated against? Around income tax time every year, I hear many KPFA programmers asking similar questions about whether to resist paying Uncle Sam until he does the right thing. What’s the difference?

Oakland writer Denise Barns can be reached at denise.barns73@yahoo.com.