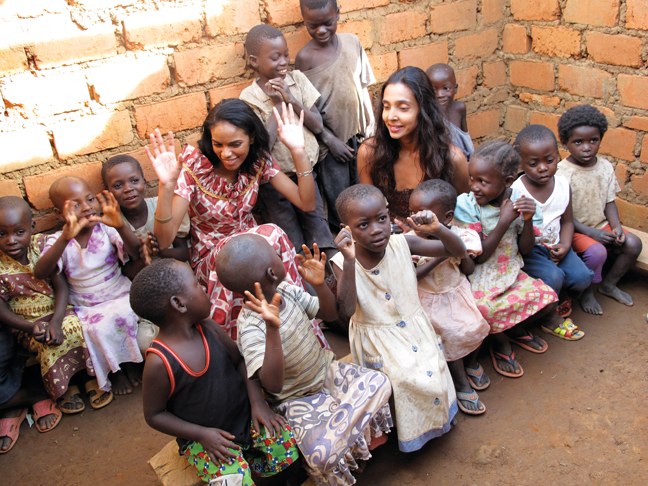 Tears welled into Deborah’s eyes as a persistent smile tugged at the corners of her mouth. A long-forgotten memory was playing itself out at the site of a school to be built by the Georges Malaika Foundation (GMF) in the village of Kalebuka, just outside Congo’s mining capital Lubumbashi. Her benefactor, Swiss-Congolese model and GMF founder Noella Coursaris, was about to speak to villagers about a school she and her team were building for them.

Toddlers played in the shade of trees, tracing circles in the rich red earth, oblivious to the poverty surrounding them. Parents, acutely aware of the crushing weight of that poverty, called out to them as an entourage of cars pulled up, trying to get the children into some semblance of order as GMF volunteers stepped into their midst to celebrate an era of hope for the people of Kalebuka.

Deborah looked now at the homes dotting the rural landscape, the nutrient-rich soil, the shock of verdant green wherever trees spread their shade over mud huts topped with dry grass. She remembers watching an idyllic scene like this before the rebels attacked, burning homes to the ground, slaughtering everyone they could find.

It could have been Deborah’s own village Kasala, where her entire family was burned to death. She escaped with severe burns and joined the hundreds of thousands of Congolese refugees who managed to flee the fighting. She dodged disease and just barely managed to stay a step ahead of starvation before GMF found her and cocooned her in the knowledge that she belonged to a family anew.

And now she was standing on rough earth again, no sign of the concrete grid of Lumumbashi. She could have been staring at the village where her entire family perished – except that there was peace here and, very soon, there would be opportunity.

Sebastien Kinguru, former mayor of Commune de Annex and committed humanitarian, began to explain the school’s progress in Swahili. He told them about GMF’s vision of a school built to international standards, from which their children will emerge ready to lead. A place for the community to come together and work for progress, so that they can serve as an example to all of Congo as the people who lifted themselves out of poverty. He barely got beyond a few sentences before the congregation broke into relentless applause.

Kalebuka’s chief explained that past consultations had already energized the villagers who were ready to help Georges Malaika build the school they saw as their guarantor against hopelessness and hunger.

“They hear from anyone who goes into the city that people with education get jobs, but they have no way to get this education. They are used to being ignored, but now we know you return, each time with real action, and now we know we will have a school here.”

Parents stepped forward to ask how they can help, and pledged free labor: “We want to work to make this happen. We will help; we will work. Just give us the chance,” said a woman who identifies herself as Mama.

Noella felt the muscles in her shoulders relax for the first time in weeks. She no longer felt the strain of hunching over her laptop, preparing for endless fundraising presentations that blurred into one another as night followed day in New York City. The people of Kalebuka were buoyant with hope, and it was infectious.

Deborah returned to her lessons the next morning with a song in her heart, the song she had heard the women of the village of Kalebuka sing to the Georges Malaika team: “It isn’t easy to help, and not everyone has the will, the good grace to help. Thank you for thinking so selflessly of us …”

From the stick and tin shacks selling bottled soda to the relatively upscale concrete bars of Lubumbashi, there is a sense of betrayal in the bitter conversations over politics. Friends gather after work to talk about strategies their leaders should deploy to throw warring factions out of Congo. At large dinners, the conversation inevitably turns to politics, and there is clear disappointment with their national leadership.

It is no secret to the Katangaise that 60 percent of the revenue needed to pay politicians’ salaries and keep their country afloat comes straight out of their mining profits. They want to know why Katanga’s mining profits continue to be subsumed into fighting a war on multiple fronts when they should be directed at developing Katanga and the rest of the country.

They want to see investments in education and health, not roads for military vehicles or mining trucks carrying minerals out of the country. But the education minister, Prosper Kabila, says his government’s hands are tied. 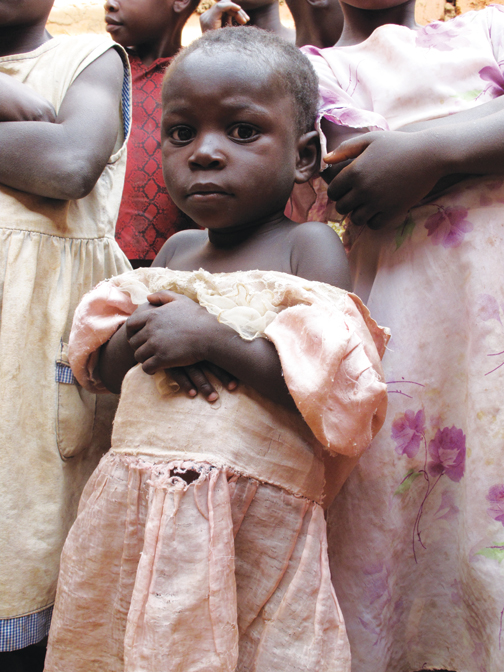 “The Rwandans and our other African neighbors steal our mining revenues by pretending to fight their wars on our soil. Ridiculous! It has to stop, and foreign governments must stop giving aid to these countries.”

But Noella is determined to bring her international contacts into play and build a school to bring hope to one pocket of rural Katanga. “Me, I can see our politicians have a difficult situation but I am a private individual and I don’t care about politics. I want to see my people are out of poverty and this is all I will work for.”

The minister looked over at Noella and nodded at her before he showed us out, “We need more people like her working for the country – so young but so committed.”

In another meeting, the governor of Katanga, Moise Kutumbi, echoed the same sentiments. “She has no reason to return here. She has a Swiss passport.

“Noella is a model. She can make money and enjoy. Most people at this age think of nothing but getting out of Congo, but she keeps coming back, every time to do more and more work here, and she is just a private individual. We hope more people will think like that, to come and return and rebuild Congo.”

Over a cup of coffee in her home, Noella looks out over the trees in her aunt’s garden and says, “I will go back to New York and continue to talk to every Congolese and American person who is interested in helping Congo and tell them what I have seen and what we can do, and we will find a way to help the small NGOs and brave people who are working in Congo every day.”

A few days later, Noella was standing before parliament in Kinshasa, asking her fellow Congolese to take a stand against rape, the most popular weapon of war that soldiers were deploying against their women. “Enough war, enough rape, the rape of our women and the rape of our country … Enough!” she admonished the gathering.

We caught up with Noella in New York, where she was speaking at a United Nations event at UNICEF’S request. Between answering emails, setting up fundraisers for the GMF school and meetings to talk about taking relief workers to Congo, she is talking about a project that has been on her mind for some time: Bringing the Congolese diaspora together to implement solutions.

“The solutions cannot be dictated by foreigners, they must come from the Congolese and then we the Congolese must take responsibility for going into action and making it happen,” said the activist, who will find herself mired in the politics she wants to avoid should his project come to fruition. And that is what is so refreshing about Noella.

There is not an iota of guile embedded in the slender 20-something. When she speaks, because English is her second language, the words sometimes stumble over each other. But her enthusiasm more than makes up for irregularities in her reasoning and current affairs knowledge. And that’s when you remind yourself: She is a humanitarian worker, not a politician who has been polished to within an inch of her spontaneity. And she keeps the promises she makes.

Writer and photojournalist Fatima Najm can be reached at fatimazn@yahoo.com. Learn more about Noella’s work at www.gmalaikaf.org.

An appeal from Noella

Help us help the people of Kalebuka. We are fundraising at a feverish rate and we still need $40,000. 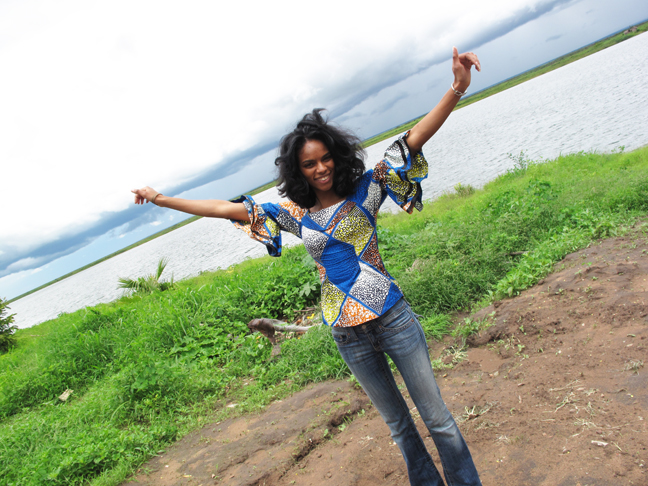 This is no ordinary school. It will provide hope and opportunity for 350 girls in the village of Kalebuka and their parents will get technical skills training here.

The Georges Malaika Foundation is a 501c3 based in New York. It’s named for my dad, Georges, and Malaika means angel in Swahili. All 15-20 of us are volunteers. The only people who are paid are local people in the village.

Please give generously and partner with us in providing this opportunity. Or please consider taking on the education and upkeep of one of the 16-17 girls we have taken off the streets and put back into school. You can give an adolescent Congolese girl back her childhood and the hope for a future by setting aside $450 a year for her. This is food, transport, education and essential clothing.

You can donate directly at http://www.gmalaikaf.org by going to the donations page.

Noella speaks before parliament in the Republic of Congo in December 2008. Even if you don’t understand French, you can see how profoundly her words are felt by these powerful political leaders.

Noella speaks with UNICEF about ‘girl power and potential’

Model and human rights activist Noella Coursaris Musunka discusses her work as an advocate for girls’ education in the Democratic Republic of Congo on March 6, 2009, at UNICEF’s “Girl Power and Potential” reception in New York. The event featured a panel of speakers outlining the strategies and goals of the United Nations Interagency Task Force on Adolescent Girls.

Lumumba is an idea

50 years after Lumumba: The burden of history