Urgent action alert at the end of this commentary!

Bayview Hunters Point is at the center of a local controversy involving mega-developer Lennar Corp.’s shameless bombardment of poor and working class children, families and elders with dust laden with asbestos, chromium, lead and countless other inorganics that are harmful to human health.

For the last three years, community residents and dozens of community-based organizations from across the City have been fighting for Lennar to clean up its act. People Organized to Win Employment Rights (POWER) has been in coalition with the Nation of Islam, Greenaction for Health and Environmental Justice and several faith-based organizations working tirelessly to bring development to Bayview that is accountable to the needs of local residents and to hold Lennar accountable for its blatant disregard of health and safety standards on one of the worst Superfund sites in the United States.

The recent editorial placed in the Examiner on April 29, likely written by Singer and Associates, Lennar’s public relations firm, and signed by the Tabernacle Development Group, an organization funded by Lennar to extract community support for its poisonous development, is misleading at best. The editorial is aimed at confusing community residents about the real controversy in the neighborhood and attempts to divert attention from Lennar’s responsibility to keep the community safe from the harmful impacts of its development project.

Contrary to assertions made by the Tabernacle Development Group, our efforts to hold Lennar accountable for its intentional disregard of its own plan to keep community residents safe are not based in extremism, but in the belief that the Bayview community deserves better than what Lennar has offered. Lennar was fined $515,000 by the Bay Area Air Quality Management District for more than nine months of health and safety violations. Those violations were also documented by the San Francisco Health Department, yet for political expediency, the Health Department chose to take little action besides a thinly veiled public relations campaign of their own, asking neighborhood residents if they wanted to have a health screening for obesity, diabetes and other unrelated illnesses. 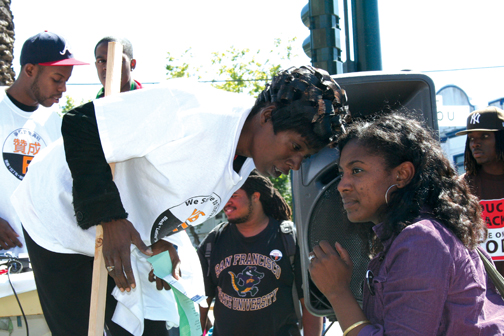 In contrast, the San Francisco Board of Education unanimously passed a resolution calling for Lennar to take proactive efforts to protect the health and safety of the children attending the more than 10 school sites within a one-mile radius of the development. The San Francisco Youth Commission quickly followed suit.

The Tabernacle Group claims that there is abundant scientific evidence that community residents are not at risk from Lennar’s development, yet they fail to acknowledge that there have been no scientific tests done on residents to assess exposure to chromium, lead and other toxic inorganics. In fact, there is no scientific evidence to back up the San Francisco Health Department’s claims that the reckless actions of the Lennar Corp. on the Hunters Point Naval Shipyard have not placed community members at risk for long term health effects brought on by daily exposure to those toxins. While there is no test for exposure to asbestos, there certainly are tests available that can assess short and long term health impacts related to exposure to chromium and lead.

It is Lennar that has failed to collect the evidence needed to place the community at ease, going so far as to intentionally turn off community health monitors to speed up work that was determined to have the potential to place community residents at risk. It is Lennar that used indoor air monitors for outdoor air monitoring, that illegally fired three African American executives for questioning Lennar’s shameless poisoning of residents of one of the last remaining African American communities in San Francisco, and it is Lennar that to this day continues to bombard local residents with more than 20 times the amount deemed “safe” by our own so-called Health Department.

To this day, not one regulator from the Health Department has stepped up to hold Lennar accountable for that and, to this day, not one member of the Tabernacle Development Group has expressed even an iota of concern for the daily bombardment of Black people with toxic dust. The only concerns that the Tabernacle Group has raised is that holding a shameful company like Lennar accountable for its disgraceful behavior in this community is somehow holding Bayview back from progress.

Now Lennar has stooped even lower, attempting to pit Black people against Black people, Christians against Muslims, resident against resident, all for the promise of a dollar, a seasonal job, some parks on toxic land, and some homes that 80 percent of the community won’t be able to afford. It leaves one to wonder – what will they stoop to next, and when are we going to stand up as a community and say, “Enough is enough!”

Now Lennar has stooped even lower, attempting to pit Black people against Black people, Christians against Muslims, resident against resident, all for the promise of a dollar, a seasonal job, some parks on toxic land, and some homes that 80 percent of the community won’t be able to afford.

What Bayview doesn’t deserve is for a righteous group of people who have dedicated the past three years of their lives to protecting children and elderly residents from toxic dust to be slandered and called extremist, using the same tactics of the failed Bush administration over the last eight years, attempting to pit one faith-based community against another.

Bayview deserves leadership that is uncompromising, unselfish and unflinching in the fight for racial, economic, environmental and gender justice. As an organization, we are proud to stand with our comrades from the Nation of Islam, Grace Tabernacle Community Church, St. John Coltrane African Orthodox Church, Greenaction for Health and Environmental Justice, the San Francisco Board of Education, the San Francisco Youth Commission and countless other organizations and individuals who are courageous enough to say Bayview deserves better, and San Francisco deserves better than the Lennar Corp. We remain committed to standing with anyone who prioritizes people over profits, people over politics and truth over distortion, and we encourage you to stand with us.

Alicia Schwartz, co-director of POWER (People Organized to Win Employment Rights), has been organizing in Bayview Hunters Point for five years. She can be reached at alicia@peopleorganized.org or (415) 864-8372, ext. 305.

POWER recently learned that the City of San Francisco applied to the California Housing Department for a $14.6 million grant that would pay for Lennar’s toxic plan to build 10,000 luxury condominiums and a stadium on the Superfund site of the Hunters Point Shipyard and Candlestick Point.

According to a recent article in the San Francisco Examiner: “If the funds are secured, the agency would award the money to Lennar Corp., the developer the city has pegged for the project. The money would pay for ‘infrastructure improvements for Phase 1 of the Shipyard development that have yet to commence,’ the report said.”

We are calling on YOU to help contact the State Department of Housing to ask them not to subsidize the dirty development corporation Lennar because of the high level of controversy surrounding the project and the history of environmental racism by the Lennar Corp. in San Francisco.

Let them know that Bayview deserves better than Lennar!

We need to show our opposition: We don’t want the state to pay for Lennar’s dirty development! This is a competitive grant and we would like to see the money go toward projects that are in fact beneficial to the communities where they are being built.

The program manager who is reviewing the grant applications for this project is Eugene Lee, State Department of Housing and Community Development Infill Program, 1800 Third St., Room 460, Sacramento, CA 95811, (916) 324-1881, infill@hcd.ca.gov.

You can also cut and paste the email below, add your name and send to Eugene Lee at his email address, infill@hcd.ca.gov:

I am writing you regarding the current grant application from the City of San Francisco requesting $14.6 million for the Lennar Corporation’s planned development on a Superfund site in the Hunters Point Shipyard and Candlestick Point.

As you may be aware, Lennar’s proposed development of 10,000 luxury condominiums and a stadium is extremely controversial in San Francisco. A broad coalition of community and faith groups began raising concerns in the summer of 2007, when hundreds of community members, children and elderly people began to develop skin rashes and breathing problems as a result of Lennar’s failure to follow the dust mitigation agreement. Earlier this year Lennar was fined over half a million dollars by the Bay Area Air Quality Management District for more than a year of serious violations.

Despite the high level of community opposition to their development at the Shipyard, Lennar has continued to receive substantial financial assistance from the City – even though the work has not yet commenced. Lennar has been given over 700 acres of land in San Francisco for a total purchasing price of one dollar. The City is also leveraging millions of Redevelopment Agency dollars to subsidize Lennar’s condominium and stadium plan as well.

The Lennar Corporation is the subject of numerous lawsuits across the country for health and safety violations, as well as other serious environmental protection violations that have placed the surrounding communities and residents at serious risk.

For these reasons, I urge you NOT to grant the Infill Housing funds to the Lennar Corporation, and to award this important state taxpayer money to projects that are truly beneficial to the communities where they are being built.

Thank you for your support in the fight for environmental justice and equitable development in Bayview Hunters Point and around the world!