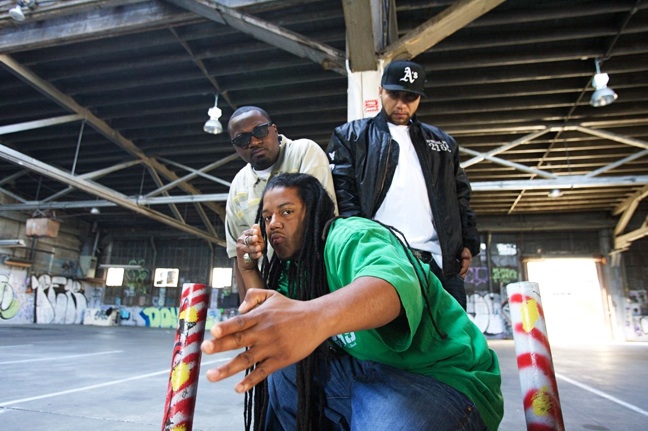 I love the music of the innovative hip hop group 5 Star Generalz, from Oakland, Cali, because they are funny, creative and push the envelope on what Bay Area hip hop sounds like. They are like a mix between the Luniz, Digital Underground, and Cheech and Chong. 5 Star Geez puts the fun back into Bay Area hip hop, which has been shaped primarily with despair, anger and desperation over the last decade.

5 Star Generalz has the kind of music that you listen to when you are freeing your mind trying to escape everyday reality. Some people smoke weed, others drink, and the music of 5 Star Generalz is similarly intoxicating. Although this is a debut mixtape, the chemistry of their sound gives you the impression that they have been doing this together for years. This is not just another interview; this is music that I really listen to when I’m kicking back ‘laxin. Here is 5 Star Generalz in their own words …

M.O.I. JR: Can you tell us about the 5 Star Generalz? How did it start and who are y’all?

King Kosh: 5 Star Generalz is Base’rox, King Kosh and Ruckafella Cole. We are a part of a rap crew called Da Syrkal from East, West and North Oakland. We’re like brothers! We attended middle school and high school together. We’ve been writing and performing since eighth grade, man. We are seasoned artists!

Base’rox: This 5 Star Geez thang started after me and Ruck took that good flight to Philly to kick it with Kosh. We recorded “Slap Nasty” and a couple other songs and it was on once Kosh touched back down in da Town.

Ruckafella: “You extra sensitive you remind me of a diva/ I’ma 5 star general with stripes like a zebra.” That’s where our name came from. Kosh heard me spit those bars on “Sick 16s” and said we should roll with 5 Star Generalz. Me and Base was with it

M.O.I. JR: Can you tell us about your new album, “California Gold Rush”? What is the concepts behind it? What does the production sound like?

King Kosh: Actually “The California Gold Rush” is a “mixtape,” but thanks for the compliment M.O.I. JR (lol). We’ve been getting that a lot. We appreciate it, bruh! On this project you can find a lot of in-house production/artist features. Production wise, Dly Alta, Epix, Virus and Heavy Rotation came through with some monstrous tracks. For features, we reached out to our homies from Da Syrkal – C. Shaw, Mr. Moo, Famsyrk, Ms. B of Nutrishus, T-Baybe, Joe Weezle, Young Shawn and Gutta Gorgeous.

Ruckafella Cole: First of all, it’s not like no other Bay Area mixtape out, no games! Secondly, “The California Gold Rush” is bringing a balance back to hip hop in the Bay. The Bay is so saturated with hyphy music, people forget how creative and talented Bay Area artists really are.

Base’rox: The whole concept behind “The California Gold Rush” is not only a dedication to the great state we live in, but to also let the masses know that our music is good as gold! Our sound is golden! We wanna get more people to invest in quality music.

M.O.I. JR: What is it like promoting an independent project without any other label helping?

King Kosh: It’s like having a new born child with not enough money to shelter that baby. On the real dough, we are receiving some help from an indie label called “Traxbarn” based in the Philippines. A very good comrade of mine from Bocolod, out there in the Philippines invested in our label, Gemstone Official. Yeah, so you can say we have like a lil’ hip hop EBT card, feel me?!

Base’rox: Well, you know it’s definitely a tough grind, but we be having hella fun out there at the same time. It’s gon’ be well worth it in the end!

M.O.I. JR: What makes 5 Star Geez different from the thousands of other rap groups in the Bay?

Base’rox: The 5 Star Geez is a special force, like a ball of energy. People can feel the liveliness in our sound; it’s no pretending. We’re here with some real good music.

King Kosh: Ummm, what makes us different is our individual background and story. Our song concepts and rap styles. Our personalities!

Ruckafella Cole: We all respect each other as generalz and play our own positions.

M.O.I. JR: How do you feel about what is going on in Oakland right now?

King Kosh: I feel excited. I feel threatened. I feel like I should be preparing myself and my family for more than a damn earthquake. I mean just a regular trip to the grocery store or the gas station can be a natural disaster.

Base’rox: Oakland is the coldest, most beautiful, craziest place to live. I love my city!

Ruckafella Cole: I feel very respected being from Oakland! As far as what’s going on in Oakland, that shit ain’t got nothing to do with me. And if it do have something to do with me or anybody I roll with, I’ll deal with it then.

M.O.I. JR: How can people hear your music and stay up on where you guys will be appearing?

King Kosh: And man, don’t forget to tune in to www.youtube.com/5stargtv to check out all the episodes to “The Hollywood Hustle” and, oh Block Report Radio and Sideshow Radio on KPFA 94.1fm. M.O.I. JR might be slapping that “Yikerz.” And also the Ghetto Gumbo show on KPOO 89.5fm. The homie K-Maxx might be bumping that “Not Tonite.” Lastly, look out for www.5stargeez.com. It’s under construction right now, but it’s gon’ be real big for real!

Block Report Radio/ The Side Show Radio comes on 94.1FM KPFA every Friday (in May and June) from midnite to 2am. Ghetto Gumbo comes on 89.5FM KPOO every Friday from 10pm-1am. Listen to and support independent Hip Hop radio.