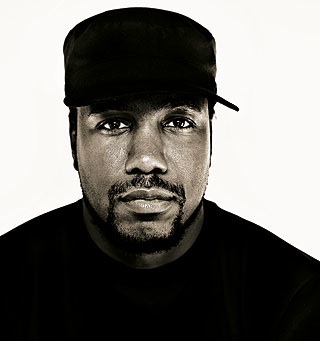 Rapper Jahi, the Cleveland to Oakland transplant, has been one of my favorite underground artists for a long time. I love his music, but what I respect most about him is the fact that he is not scared to sound like a grown ass man on the mic. Hip hop currently is going through a phase where everybody seems to be scared to grow up or act their age, but Jahi’s subject material on “George and I”,  just like the rest of his albums, is on that 30-something-year-old mature vibe.

“George and I” is Jahi and producer Korise’ Big Tunes’ newest creation where Jahi is rhyming to Korise’s George Benson remake tracks. It’s hot and innovative. I haven’t heard a dedication/concept album like this. It feels good to be hearing these guys push Bay Area hip hop to new limits. Now listen to Jahi in his own words …

M.O.I. JR: How did you hook up with Big Tunes to create the “George and I” album? Why did y’all remix the music of George Benson?

Jahi: First of all, JR, we are sending you good energy as you deal with what you have to deal with. I remember years ago you and the Bay View was one of the first papers to show me some love, so I want to give that back on the record first. Now to the questions.

It happened organically. I was working on my “Less Is More” album, and we used that Windsong joint by George Benson, and I got Gift of Gab to come in and bless the track. Korise always wanted to do it, and I have great childhood memories growing up listening to George Benson, so the idea was planted. It wasn’t until February, when Korise and I hooked up, and we did a song called “Warm It Up” – out of that conversation we decided to do it. We did the whole project during Black History Month.

Oh, and by the way, we updated the song “Explore” I did with Gift of Gab. It now features Grammy Award winner Speech from Arrested Development. I sent him the track in the spirit of sharing good music and he said he had to get on it. I felt like that was the spirit telling us it was a divine thing that we came together for this project.

M.O.I. JR: How did you decide what George Benson tracks y’all would remake?

Jahi: Korise handled the selection of tracks, and I did the writing. I knew I wanted to do “Give Me the Night” and flip it into “Give Me the MYC.” What’s deep about this project is that instead of sitting down with the track, and trying to write on a few ideas … this time all I had to do was sit and listen to the stillness of my own soul. The words were already there in the muse – an incredible experience – and growth came out of that for me personally and as an emcee always looking to raise the bar.

M.O.I. JR: How has the response been to the album thus far?

Jahi: You know, the folks who’ve got a chance to get a free copy we’ve been passing out, or downloading the album have had nothing but good things to say. Honestly, this was for us as artist and producer first, and then the people.

Nowadays I treat being an emcee just like a farmer. My lyrics are the seeds; the music is the fertile ground. As long as we treat what we do and the music with integrity, I think this is the greatest success we could ever have. Hopefully you picking up on it will help folks to know it’s out there. We both feel like it’s the perfect summer record for grown people who want to hear substance over cool music instead of the same ol’ same.

Jahi: People are still buying music. We are blessed to have Amoeba and Rasputin record stores. There are some of us still out there all over the world who still appreciate actually buying good music, opening the CD, reading the credits and enjoying that experience. Do I still get free music on the computer? Yes, but if it’s something that really is good, I make sure I go out and actually buy the CD. There are people still doing this all over the world.

In terms of the music industry, man, I really don’t have a comment on the local or international music industry. For me, at the end of the day, it’s about making good music first. Over 50 percent of what’s happening in the music industry doesn’t resonate with me. I heard Prince say on a record, how can a non-musician speak about the music except from a consumer’s point of view. I think that’s a really deep statement. I think the industry is the industry, but making good music that people can appreciate 20 years from now is what I’m working on. I maneuver through this industry like Christ – in it but not of it.

M.O.I. JR: When will y’all be performing music off of this record around the country?

Jahi: We’ll have to see. Hopefully we’ll be doing Art and Soul this summer and we’ll do the whole project top to bottom. Honestly we only will do this live if the whole situation is right and we have a full band so people can really get the whole experience. Again, if no one ever sees it live, we just want people to get the music and enjoy what we tried to put together.