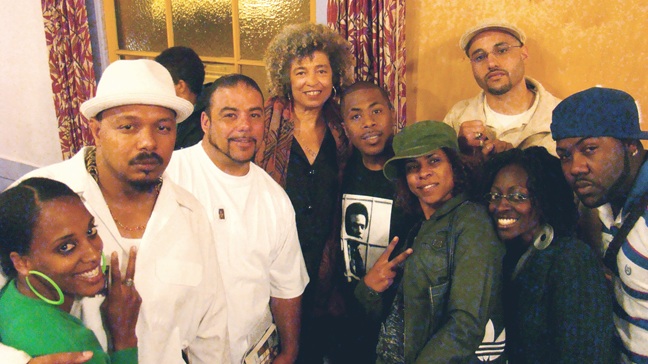 On a windy April 24th, hundreds gathered into Humanist Hall on the periphery of downtown Oakland to celebrate the 55th birthday of Mumia Abu Jamal, a former Black Panther who has been a political prisoner for the last 28 years, as well as celebrate the release of his newest book, “Jailhouse Lawyers,” published by City Lights (www.citylights.com).

Two weeks prior to this birthday party and book reading, Mumia was denied a new trial by the U.S. Supreme Court, which his legal team was petitioning on the grounds that Black jurors were discriminated against in the jury selection process of Jamal’s ‘81 trial, which in the limited minds of people whose vision is dictated by the law, means that Mumia is on the path to spending the rest of his natural life in jail or to be murdered by a state sanctioned legal injection. This ruling is another example of the people in power not following their own laws.

In a previous case known as Batson, a plantiff was granted a new trial based on the fact that one potential juror was discriminated against. In Mumia’s case, 11 were discriminated against. Some describe this behavior by the system as “the Mumia exception,” where the laws change at the drop of a dime, regardless of precedent, to make sure that the system keeps Mumia caged and on deathrow. Mumia himself describes it in “Jailhouse Lawyers” in the section titled “What is Law?” something like this: Law is a repressive instrument used by the oppressors against the oppressed to stay in power.

Although this unjust court decision was in the backdrop of this Prison Radio and Prisoners of Conscience Committee-sponsored event, it did not put out the flame in people’s hearts to continue the fight for justice, to free Mumia and abolish the prison system. A number of spirited speakers graced the stage to read excerpts from “Jailhouse Lawyers” and to talk about why they thought that that particular excerpt was important.
The hosts for the evening were recording artist Chela Simone and Noelle Hanrahan of Prison Radio. Speakers included Ambassador Franco, who talked about the conditions that Mumia lives and works under, and Kulwa, who talked about the imprisonment of women. Coordinator Jay related the book to his experience being locked up for almost a decade, and I talked about not forgetting the fact that Mumia both writes and was active in the community; he is far from just being a commentator. Those speakers were all member of the Prisoners of Conscience Committee.

Other speakers included Jack Bryson, the father of two of Oscar Grant’s friends who were with him on the night that he was murdered by BART police; Richard Brown of the San Francisco 8; legendary activist Angela Davis; musician Adimu of Hairdoo; legendary lawyer Lynne Stewart, who was accompanied by her husband, Ralph Poynter; jailhouse lawyer Ed Mead, who was mentioned in Mumia’s new book; former Minister Huey P. Newton’s lawyer, Tony Serra; Nina Serrano of KPFA’s La Raza Chronicles, who read a birthday greeting for Mumia from the Zapitistas’ Subcommandante Marcos; and well known Oakland rapper Mistah F.A.B., who also used a section of “Jailhouse Lawyers” to talk about his blood brother recently striking out under the Three Strikes law and getting 432 years. And these were just a few of the presenters. Tiny of Poor News Network and the Molotov Mouths brought a lot of flavor to the event with their political poetry.
The night ended right after Angela Davis, the keynote speaker, spoke on the abolishment of the prison system, Chela sang happy birthday, both the traditional white and the Black way, Ambassador Franco brought up a chocolate cake with candles burning, and Noelle gave out a number of plaque awards to community supporters of Mumia, accompanied with golden wrenches. At the end of the night, looking from the stage, you could see the cornucopia of ethnicities, generations and people from all walks of life paying tribute to one of the baddest freedom fighters and coldest journalistic warriors breathing.
There were tatted up Black youngstas from the flatlands of Oakland, white hippies from Marin, Santa Rosa and Berkeley, disabled people rolling around in wheelchairs, as well as children running through the crowd. According to everyone that I talked to that attended this event, this turned out to be one of the best organized Mumia events done on the West Coast this decade. And a shout goes to Philly and New York, who also organized Mumia birthday parties in their cities last week.

Former Black Panther and revolutionary journalist Kiilu Nyasha was not able to attend the event because of an accident that kept her hospitalized. We love you, Kiilu, for your contribution to the People’s Struggles over all of these years.