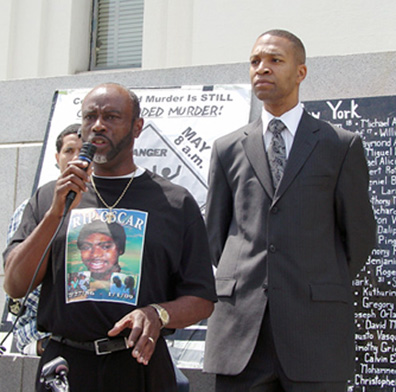 On the eve of Malcolm X’ birthday, Monday, May 18, the preliminary hearing to decide whether killer cop Johannes Mehserle will stand trial for the New Year’s murder of Oscar Grant finally got underway.

After the hearing had wrapped up for this week, Oscar Grant’s Uncle Bobby, Cephus Johnson, issued this statement of appreciation on behalf of the family, asking that it be posted widely:

“Thanks for all your support and thanks to all the community for their support these last three days. There is no way we as a family can thank the community enough. We do wish to say, however, ‘We thank all of you for your support.’ We know that many of you have sacrificed your own personal activities and lives to support us in a fight that can be long and hard. Our success here to secure justice for Oscar Grant will no doubt be that line in the sand that will say to all police officers, ‘If you kill or break the law, you will go to jail.’

“Feel free to repost this message elsewhere so that the community will know that we as a family thank them for their contributions to the success thus far for Justice for Oscar Grant. THANKS!” Uncle Bobby concluded.

In this video from Davey D’s Hip Hop Corner, Davey interviews Oakland activist Tony Coleman, who describes the collective gasp in the courtroom when a new, clearer video of the murder was shown:

“Yesterday they had on the stand a brother who actually had a clear video shot – it wasn’t from a camera phone like the rest of them; this was actually taken with a video camera.” The police had confiscated the camera, Tony said, and it took a subpoena and 45 days to get it back, but the tape had not been changed.

“It was a very clear shot, and it was an angle that hasn’t been released to the public, that nobody else has seen. And when they showed it in court, the whole courtroom gasped, because it was a clear, direct shot … showing this officer reach for his gun and shot him – cold blooded, cold blooded murder.”

Rarely are police held accountable for the murder and terror they inflict on communities they are supposed to protect and serve. After Johannes Mehserle executed Oscar Grant, it took a rebellion in downtown Oakland to push District Attorney Tom Orloff to charge him with murder. 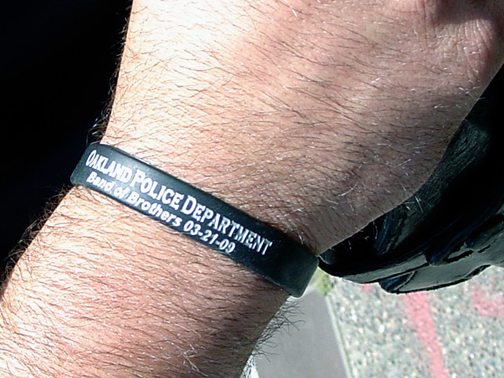 This week’s preliminary hearing – finally getting underway nearly five months after the videotaped crime was committed and eyewitnesses’ videos were seen by millions around the world – had been postponed from March 23 after a shootout on March 21 that left Lovelle Mixon and four Oakland police officers dead.

“But we’re out here today standing strong. There should be only one kind of justice: Justice for all!”

Oscar Grant’s family is calling on the community to come out once again next week to stand strong – to stand guard – outside the courthouse at 12th and Oak streets as every effort is made in the courtroom to demonize the victim, intimidate the witnesses and, if Mehserle must stand trial, move the venue away from Oakland. We must remember that the last time a video moved the world to condemn police terrorism – when Los Angeles police viciously beat Rodney King – moving the trial of the officers to Simi Valley, a suburb where many cops lived, doomed that effort to hold police accountable.

“You don’t kill our brother! We don’t never forget!” exclaimed Malcolm X about an incident he described in a WBAI interview in 1962 after the Los Angeles police had murdered an unarmed Muslim leader by shooting him point blank in the chest in front of many witnesses. “Someone has to pay. … I’m telling you, the only way you get justice is in the street. … The only way you get justice is when you make justice for yourself.”

The message from Cephus Johnson was first posted by journalist Dave Id at http://www.indybay.org/newsitems/2009/05/21/18596699.php. Bay View editor Mary Ratcliff can be reached at editor@sfbayview.com.