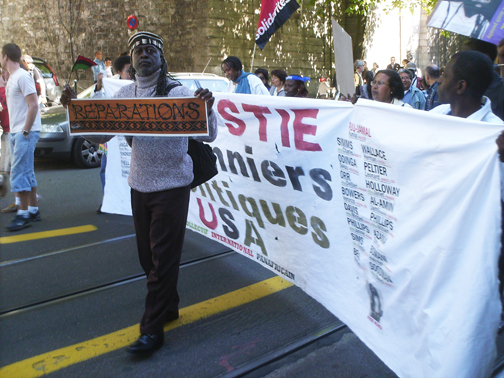 As we commemorate Afrikan Liberation Day – and the 84th birthday of our revolutionary ancestor, El Hajj Malik El Shabazz (Minister Malcolm X), as well as the 87th birthday of his and our dear friend, Elder Mother Yuri Kochiyama – we encourage our communities to recognize and celebrate another key victory for our reparations movement.

This past month, representatives of nations, states, non-government and grassroots organizations from around our earth gathered for the Durban Review Conference (DRC). Held at the United Nations’ European headquarters in Geneva, Switzerland, the DRC was a follow-up to the Third World Conference Against Racism (WCAR). That important event took place eight years ago in Durban, South Africa.

Most significantly, the 2001 WCAR process brought forth the strategic and passionate organizing of reparations advocates, particularly those from the U.S., which led to a monumental victory. Despite the initial threatened boycott, then intense pressure and interference on numerous heads of state and, later, withdrawal by then U.S. (P)resident George W. Bush, powerful language was adopted into the final document.

The Durban Declaration and Program of Action (DDPA) stated that slavery and the trans-Atlantic slave trade, colonialism and apartheid were crimes against humanity. Furthermore, it called upon the U.N., its member states, and international financial and development institutions to develop capacity-building programs for the economic and social development of people of Afrikan descent, i.e., reparations.

So we fast forward to this year. While the non-attending imperialist states, including the U.S. under new President Barack Obama, the corporate media and numerous talking heads were pontificating about who was not in Geneva in April, our focus was on reaffirming the DDPA, addressing reparations more specifically and establishing a Permanent Forum for African Descendants.

While the ever-offending colonialists and their mouthpieces were loudly objecting to positive language which humanized the suffering Palestinian people’s right to their land, nationhood and self-determination, we were busy building a strong multi-national and multi-racial alliance with and for Palestine. Though the class of vicious warmongers feigned condemnation of Iranian President Mahmoud Ahmadinejad’s very presence at the DRC, some of us reminded folks that it is the sovereign nation of Iran that is being encircled by the dangerous nuclear U.S., NATO and state of Israel occupiers in Iran, Afghanistan, Pakistan and, of course, Palestine and other parts of the Afrikan continent.

And, to put matters in their proper context, we should emphasize that even with the highly publicized absence of only 10 European or Euro-settler states, more than 95 percent of U.N. member states did, indeed, play a part. One of our old Chicago community organizing strategies was if the criminals wouldn’t show up to a public gathering, it was then our sacred duty to take our mass mobilizations to properly serve, try, convict them and promote justice wherever they reside. Ase`. Amen.

Therefore, in spite of the disrespect shown by what the newly-appointed Attorney General Eric Holder has correctly called “a nation of cowards [in] race related issues,” our movement prevailed. The DDPA was reaffirmed! Though we were temporarily unsuccessful in our challenge to representatives from member states and current U.N. High Commissioner for Human Rights Judge Navi Pillay for a Permanent Forum for Afrikan Ascendants, we did achieve the full support of our Indigenous allies who recently gained that success after decades of struggle.

Special praise goes to the Africa (Diaspora) Group representatives and NGOs such as the African Descendants Caucus, Global Afrikan Congress, Civil Society Forum, December 12th Movement, Malcolm X Grassroots Movement, National Coalition of Blacks for Reparations of America (N’COBRA), World Against Racism, United Against Racism (in the U.S.), US Human Rights Network, TransAfrica, New Black Panther Party and many, many others. Our gratitude should also be extended to progressive media such as Free Speech Radio News, Pacifica Radio Network, The Final Call, Black Star News of London, San Francisco Bay View newspaper and many, many other non-corporate outlets from around the world which provided honest reporting of the proceedings leading up to, during and after the Durban Review Conference.

It is my feeling that, as we collectively advocate for a Durban-plus-10-year conference in 2010 or 2011, the reparations movement can put itself in a much stronger position to gain even greater achievements. Even with the worsening monopoly and financial capitalist depression, the issue of reparations is now receiving more traction throughout the African Diaspora.

Our task is to continue our multi-national discussions, unity-building efforts, mobilizations, challenges to governments and corporations for past and continuing crimes against humanity and thorough evaluations of member states’ implementation, or lack thereof, in carrying forward the DDPA.

In the Bay Area, reports from the Durban Review Conference will be made during the 51st year commemoration of African Liberation Day in Oakland, sponsored by the All-African Peoples Revolutionary Party (AAPRP). Those events take place on Friday, May 30, at Laney College and Saturday, May 31, at Bobby Hutton (aka Defremery) Park at 18th and Adeline.

Foundations for Our New Alkebulan/Afrikan Millennium (FONAMI) will host a Juneteenth Freedom Days event at the Humanist Hall, 390 27th St., between Broadway and Telegraph in Oakland. We will also be screening Brother Al Santana’s powerful film highlighting our collective reparations victory in Durban, South Africa.

Jahahara Amen-RA Alkebulan-Ma’at (former European enslavement name, J. “Harry” Armstrong) is a past National Co-Chair of the National Coalition of Blacks for Reparations in America (N’COBRA), author of the books “Reparations Sasa, Volumes One and Two,” and composer of the “We Demand Reparations” and the new “Rise UP You Mighty Afrikan People” musical CDs. To order books and music CDs, arrange speaking engagements or participate in our petition drives to the United Nations and President Barack Obama, write to FONAMI, P.O. Box 10963, Oakland, CA 94610 or email support@wedemandreparations.com.