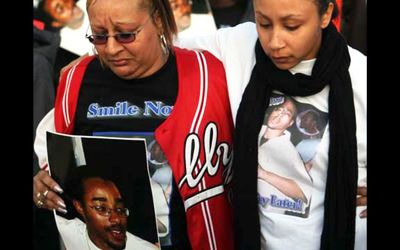 Ever since the police murder of Lovelle Mixon, after he allegedly murdered four Oakland police officers in East Oakland on March 21, on the SF Bay View newspaper website, sfbayview.com, hundreds of messages have been written in the comment sections at the end of the articles by people who are undercover cyber police and people with strong pro-police sentiments, with some coming right out and saying they are members of police departments. We believe that it is important for our readers to take note that the clear line of demarcation between the police and the people drawn by some writers at sfbayview.com has apparently attracted the police to come in swarms to the site, hoping to sway public opinion and straight out intimidate.

One such commentator, who is a self-confessed murderer, wrote at the end of the article “Police 2, Oakland residents 4,” on March 27, using the moniker dt_two, said: “Allow me to give the disclaimer right now, yes I am a cop. No, I’m not African (Afrikan for those overly involved in labels)-American. I’ve looked into the eyes of, and been there for the last breath of more ‘minority’ citizens than some emergency room doctors. It’s sad, it sucks, and it’s not something to make light of in a headline.

“So, fuck you for making death your cheap joke of a byline. This entire incident was a holocaust on many fronts. The fact of the matter is, the thankfully deceased Mr. Mixon is no longer. However his life came to be, he was a predator. The rape allegation is just that. Putting that aside, he was a parolee at large, with a gun, ultimately at least two by the time of his blessed demise. Don’t cloak yourself in racist revolutionary b.s. thinking he who was willing to take on a police officer, wouldn’t rob from you, steal from your home, maim or kill you in an instant. I am saddened for the four deceased officers; not because they are white, but because they were my brothers.”

Another commentator, calling himself I.B.A. BLACK BABOON, said on March 25: “Yes, Lovelle Mixon dun b a hero to us in de communeeetay! He represent what we’s all about: kill de whitey crackas! N if he supposedly dun rape someone, you’s can b’ sure she dun ask fo it: We’s gonna get it anyways we can! Kill whitey! Power 2 de peepils!”

Another commentator, using the name LibsRLosers, said on May 15: “I’m fucking ready for civil war with these assholes! They can either get their worthless fucking chip off their shoulder or prepare for battle.”

Still another, calling himself Teddy, wrote on March 25 at 8:32 a.m.: “Absolutely deplorable that this so called ‘pro-black’ newspaper is run by a gaggle of ignorant porch monkeys. Fuck all you niggers; it’s open season on your recidivistic asses.”

I’m presenting this to readers of the SF Bay View because it is important for us to know what we are up against in Amerikkka even under a Black president. The police and the government know better than most how important it is to get public opinion on your side. That is why they are reading the Bay View to try influence our readers to their twisted ways of thinking about the Black community. Most of us are too smart for that.

Historically speaking, J. Edgar Hoover, the late director of the Federal Bureau of Investigation, oversaw a program similar to what is going on now, where agents and allies of the FBI were placed in newsrooms to trumpet the story that the government wanted us to hear instead of the truth.

Also take into account that when the U.S. military attacks a country, the first thing they go after is independent media and communications that the people control. For example, look at the attacks in Iraq on Al-Jazeera, a pro-Arab anti-West media network. It was one of the first targets to be bombed.

Still I want to salute the cyber-warriors who have made sure that these racists and pro-police comments do not go unanswered. Someone called Wallace wrote at the end of the article “The ambivalent silence of the left: Lovelle Mixon, police and the politics of race and rape” on May 8 at 8:39 a.m.:

“The police in America are exercising social control of Blacks through terror. We are being forced to accept rates of unemployment as high as during the depression and think it is normal. We are being forced to accept conditions of life which would not be tolerated by any group of real citizens! Black labor is being systematically replaced by foreign workers and we are being left to rot in forced idleness. Unfortunately we have not figured out how to employ and use our energies.”

Another commentator, who calls himself quinn in cyberspace, said on April 15 at 1:16 p.m.:

“These cops have been bringing hell on the black community in oakland and have no regard for minority life. they harass people out here and once their shift is over they go home to there wife and kids like nothing happened. The police in America kill a average of one person a day, and see no consequences. They think of all minorities as the enemy and show it every day on the job. Me personally, i was beaten by the police in east Oakland at the age of 12.

If they did their job instead of handling social vendettas maybe Lovelle wouldn’t have so much support. No one cared when people in the street were getting killed with automatic weapons but when it happens to police its a major issue, not. it shows how the color of your skin shows so much in 09, especially, in a community that is mostly African American and Hispanic. I’m not saying what lovelle did was justified, but it sure was bound to happen.

The OPD has been bringing hell for to long. its time for a dose of reality. They need to see what these streets are really like when you do dirt out here. They were under federal investigation for a reason. Oakland Police are dirty as fuck. Just because of this doesn’t mean that they deserve medals.”

Reading the comments on the Bay View website can be an education in itself, because it makes you realize how much has not changed in Amerikkka over the last 500 years in the minds of some people. On the other hand, you can also see how some people intellectually go to war and speak up on behalf of the community. Check it out …