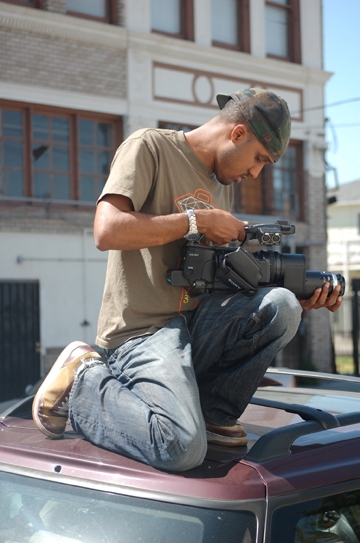 It is said that television is the most powerful of all traditional mediums pre-internet because you can hear it, and you can see it; and as they say seeing is believing. With technology becoming more and more affordable, less and less people are watching movies and more and more people are making their own movies, distributing them through YouTube, Vimeo and DVDs to name a few of the outlets.

This is a new day on the media landscape where the average person with a computer can make media and put it out there to compete with some of the world’s biggest media corporations like CNN, BBC and MTV.

Damon Jamal is a pioneering force in the Bay Area’s media and hip hop markets that has been producing projects that 15 years ago would have only been conceivable with a budget from MTV or VH1. Now he is a very sought after videographer and filmmaker who makes the magic happen on an independent level right from his Mac laptop’s Final Cut program, which is sitting on his desk in his downtown Oakland office which he shares with Kaz Kyzah’s Mogul Media. Damon Jamal is definitely one of the names to look for in the coming months and years. Check him out in his own words …

M.O.I. JR: Where are you from? And when did you start working with cameras? And creating products?

D. Jamal: I was born in Berkeley, grew up in Berkeley and Richmond and then moved out to the South Bay for a few years. Now I’m back on the East Bay where I’m “spozed” to be.

I started working with cameras in 2006 as I was looking to create dope visuals with some artists I was working with. Being a nerd, I knew it was all about software and creativity, so if I could get my hands on a decent cam I could do anything “they” (on TV and elsewhere) do.

My first product came out in ‘07 – “Mistah FAB: Prince of da Bay” – that was a dope DVD that I’m still proud of. I got feedback from people all over the country about that DVD that didn’t know FAB was as big as he was until they saw the film.

M.O.I. JR: What is the thing that you like the most about making movies?

D. Jamal: I like the challenge of taking something plain and making it exciting. Since the content that I’ve been working with lately has been primarily reality TV/documentary type of footage, you have to be more creative on the editing side because there is no script.

M.O.I. JR: What is the importance of traveling? Where is some of the places that movie-making has taken you? 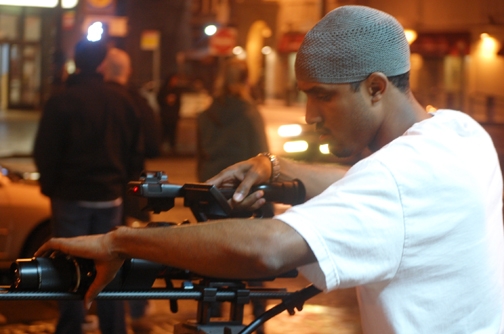 D. Jamal: It’s extremely important to get out of your area and not only network with others nationwide, but work with them. Networking leads to cash. I’ve worked with people all across the country at this point, from New York to Oklahoma City to San Diego and back to the Bay of course. As an entrepreneur, I get little rest so it’s mandatory for me to create new relationships every day in order to get long term money. Everybody in the Bay knows me but everyone in Texas, for example, doesn’t. So that means there’s cash out there for someone with my talents and drive.

I’m trying to get out the country and make some movie magic. I’m working with Los Rakas on something right now so maybe I’ll hit Panama and then slide down to Argentina or somethin. Tu sabes? (“You know?” in Spanish.)

M.O.I. JR: Can you tell us about your stripper reality show?

D. Jamal: “Vixen: The Naked Truth” is a show that me and Kaz Kyzah created which follows a handful of girls that work at what is now called Pink Diamonds in San Francisco. It is a fully nude strip club and the only in the Bay that is Black owned so therefore it is hated on by police and city officials and that creates it’s own interesting storyline in an already richly dramatic and exciting environment. We’re talking about a work environment where girls steal from each other, physically fight each other, and all types of extra other stuff that you’re gonna have to wait to see.

Although we did just create a website so you can start getting a taste of what’s to come – vixenTVshow.com – also a nice little DVD will be out June 16 which will be available for purchase which will give you a more in depth look at the show which we are currently shopping around. Oh yeah, I forgot to mention Sway Calloway is the executive producer so that opens a few more doors than usual. It’s definitely not a show MTV would air due to the graphic content – not really nudity but more so drug related references and use – but Sway has a lot of connects in the industry so we’re looking at Showtime or a similar network.

D. Jamal: We’re putting the finishing touches on the “San Quinn: From a boy to a man” movie, which will also be in stores June 16 as well as the “Ozone West 3” DVD, which will be in stores the same day. There’s a lot going on that day. Other than that, I’m really trying to make the move towards full length, multi-million dollar films, which was my goal at the beginning of all of this. Sometimes you get sidetracked though, ya know? It’s a good kind of sidetrack though ‘cause I thoroughly love my life, but at the same time it’s important to keep moving up the ladder.

M.O.I. JR: Where do you see In Yo Face Films in five years?

D. Jamal: In five years, I definitely see In Yo Face Filmworks as a company that is producing $1-$5 million films that at least triple their return. I actually have a business plan that calls for that to happen in three years, but good times either way. We’ll stay in the hip hop DVD market, but I personally would like to pass the baton and have someone else take over that role and I’ll just oversee the projects.

M.O.I. JR: What’s your perspective on ‘hood independent films in the Bay?

D. Jamal: I don’t know about the term ‘hood, but independent films are a staple in this film industry. With the ever decreasing cost of broadcast quality cameras, the current generation has access to affordable technology that allows them to create whatever they can imagine, especially when you throw in a few lights and a greenscreen. Adding to this is the proliferation of social networking sites such as MySpace and Facebook, coupled with blogging sites such as Twitter, which produces free marketing tools that are just as powerful, if not more so, than the ads you see during the Superbowl that sell for millions of dollars.

M.O.I. JR: How do people see some of your work online? What do you have in the stores now?

D. Jamal: The majority of our work is displayed on InYoFaceFilm.com. You can also go to vimeo.com/InYoFaceFilm to see that and more. The “Ozone West” series is in stores now – Rasputin’s, RapBay.com, Dimple – and Tuesday, June 16, you will be able to get the Vixen and San Quinn DVDs.

Here’s the trailer for Ozone Awards 3