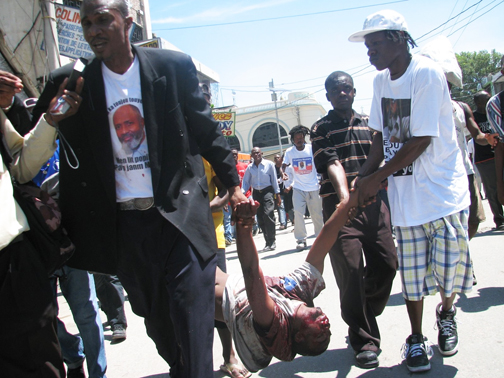 The mood was militant, even joyous, as thousands poured out of the Port-au-Prince Cathedral following the funeral of Father Gérard Jean-Juste on June 18. They merged with rara bands which had been circulating in the streets outside the church during the four hours since the service began at 6 a.m.

Then about 10 gunshots rang out.

People ran and dove for cover. It all lasted about 30 seconds.

Outside the south door of the Cathedral, a young man in a gray T-shirt lay on his back, his chest heaving and blood spurting from his mouth. An angry gesticulating crowd gathered helplessly around him, watching his final tortured minutes of life.

The trouble began about two minutes earlier when five Brazilian soldiers of the United Nations military occupation force known as the U.N. Mission to Stabilize Haiti (MINUSTAH) had arrested a man with dreadlocks by the same south door, out of which Jean-Juste’s flag-draped coffin had emerged just minutes earlier. The coffin had been loaded into a hearse and begun its journey to Cavaillon, the priest’s birthplace about 135 miles southwest of the capital.

As the U.N. soldiers roughly led the man away, angry mourners followed them, shouting with outrage. A few threw empty plastic “Juna” juice bottles, which are about the size of a tennis ball.

The soldiers loaded the man into a truck parked at the Cathedral’s back corner. “Some of the soldiers began to fire their weapons in the air,” explained Faubert Pierre, 41, a film crew driver who witnessed the shooting. “Then, as the truck began to pull away, one of the soldiers, sitting in the back of the truck, fired with his weapon leveled, directly at the people outside the church.”

The victim killed, known at press time only as “Ti Charles,” was from the Solino slum in the Delmas district. The bullet hit him in the mouth.
The U.N. has denied any responsibility for the shooting, saying that the victim may have killed by a rock or a blunt instrument.

Demonstrators carried the bloody body from the church a half-mile down the hill to the National Palace, where they lay it in the driveway, on the proverbial doorstep of President René Préval. It was later taken to the morgue.

“Even though the U.N. troops pulled the trigger, Préval is responsible for this murder today,” said Lavarice Gaudin, the leader of Veye Yo, the Miami-based popular organization which Jean-Juste founded, during a stop by the funeral motorcade in the southern city of Miragoâne.

The U.N. bullets only increased the militancy of the June 18 mobilization, which was half a celebration of Jean-Juste’s life and half a rally for the return of former President Jean-Bertrand Aristide, who remains exiled in South Africa over five years after the Feb. 29, 2004, coup d’état that overthrew his government.

Thousands of Haitians came to the funeral from poor neighborhoods such as Cité Soleil, Bel Air, Martissant, Solino and Ti Plas Kazo, where Jean-Juste used to preach at St. Clair’s church and founded a food program feeding 1,000 children a day. Hundreds more expatriates came from Montreal, New York, Boston and even Paris, France. Dozens of Veye Yo members were on hand, making the Miami delegation one of the largest.

There was a brief exposition of Jean-Juste’s body before the funeral, which was presided over by Bishop Serge Miot and Fathers André Pierre and Adonai Jean-Juste, assisted by a dozen other purple-robed priests.

“The priest struggled for a state of law in Haiti where all Haitians from all walks of life would be able to live in dignity,” said Father André Pierre in a long eulogy.

Before and during the service, several mourners shouted slogans or analysis that was hostile to the church hierarchy and the U.N. occupation of Haiti. “Those are a bunch of hypocrites standing up there at the altar,” cried out one man as the funeral rites were conducted. “Where were they when Father Gerry was in jail? They never lifted a finger to protect or defend him. Now they come out when he’s dead, but they were nowhere to be found when he was alive!”

“After 200 years, we are living under the boots of other nations,” yelled another man. “What is going on here? What country am I living in? It can’t be Haiti, the valiant nation founded by our ancestors!”

The Préval government has still refrained from making any declarations about Jean-Juste close to a month following his death at a hospital in Miami on May 27 (see Haïti Liberté, Vol. 2, No. 46, 6/3/2009). Nonetheless, Haiti’s education minister attended the jam-packed, often chaotic funeral along with dozens of senators and deputies, political party leaders and former government officials.

At several points during the service, mourners broke out in chants of “Aristide! Aristide!” and held aloft photos of the former president.

After the funeral, a motorcade of about 20 cars and eight buses headed south on Route National #2, accompanying the hearse carrying the coffin. Every 10 or 15 miles along the route, there would be a large white and black banner across the road signed by Veye Yo. “Gerry, you are gone, the struggle continues,” many read. After becoming split up in the confusion of passing through Carrefour, the entourage regrouped in Mariani, and then proceeded to Miragoâne. There, Gaudin and René Civile, a Lavalas Family party leader, spoke to the crowd of about 2,000 people.

The funeral procession then headed south through the mountains, the last leg of Jean-Juste’s final pilgrimage. Just before arriving in Cavaillon, the coffin was transferred from the hearse to a Nissan Patrol jeep for transport over the final miles of rough road.

The motorcade stopped at the church in Cavaillon, where several thousand attended a final hour-long mass. Then the coffin was loaded back into the Nissan and the entourage drove about four miles over cratered roads through lush countryside to a hastily constructed 15-by-15-foot unpainted cement tomb next to the grave of his mother.

It took about two hours before all the final words were spoken and the coffin was placed in the crypt, which overlooks the rural fields and streams where Jean-Juste grew up with eight brothers and sisters and about a dozen cousins, many of whom were on hand for the burial.

“This is the place where he wanted to end up,” said Marc Thelusma, a Haitian activist from Miami who began working with Jean-Juste in the late 1970s, as the sun was setting. “That is the only happy thing about this extremely sad day.”

Kim Ives is a writer and editor for Haiti Liberté, a major Haitian news weekly based in both New York and Haiti. Email editor@haitiliberte.com, call (718) 421-0162 or visit www.haitiliberte.com.

The character assassination of Samba Boukman