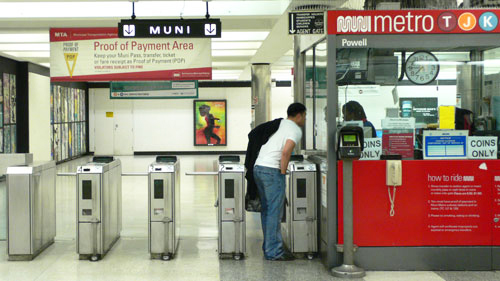 The San Francisco Board of Supervisors recently voted to approve the San Francisco Municipal Transportation Agency‘s public transit fare hikes and service cuts, as have New York City and cities all over the country.

Paired with every news account of fare hikes, service cuts and transit worker layoffs are reports of rallies, protests and citizen lobbies to stop the fare hikes and service cuts and stop punishing those who need to ride the bus to work or wherever and those who choose to ride the bus instead of taking up public space with their own vehicles and spewing more hydrocarbons and crud into the air we all breathe.

San Francisco bus fares will go up and service will go down as the struggle over who gets stimulus funds continues, including the struggle over whether or not a chunk will go to improve the bottom line of the South Florida-based Lennar Corp., which enjoys most favored corporation status with San Francisco Mayor and California gubernatorial candidate Gavin Newsom, and with the Pelosis, Mayor Newsom’s relatives by marriage and San Francisco’s most powerful political family.

Highway and bridge lobbyists trumped mass transit riders in the final stimulus bill. Our MTA and other transit authorities around the country are in line for token stimulus funds, but only for new building projects; no immediate operating support to stave off fare hikes, service cuts and layoffs.

And, the pain is predictably ill distributed:

Who rides the bus?

How many trillions have gone to the bank bailouts by now? How many hundreds of millions, or billions, to executive bonuses for those who created the hardest hard times since the Great Depression?

And how many times a day do we hear that the polar ice caps are melting, the polar bears are drowning, global warming is upon us and “we” all have to quit our lowdown driving, greenhouse gaseous ways?

Earlier this year, Transportation for America, a campaign for public transit, put together a Google map of transit fare hikes, service cuts and job layoffs, recent and pending. There’ve been developments since, like the decision in San Francisco, but this is still a good picture of national transit anguish. Click on balloons for details:

View United States of Transit Cutbacks in a larger map

San Francisco writer Ann Garrison is the energy policy examiner for Examiner.com, where this story first appeared. She also blogs at ColoredOpinions.blogspot.com and is the website writer-editor of thepriceofuranium.com. She can be reached at anniegarrison@thepriceofuranium.com.