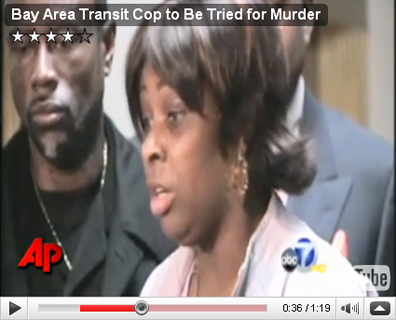 A victory in the campaign for justice for Oscar Grant III was celebrated today after the presiding judge, Superior Court Judge C. Don Clay, concluded the preliminary hearing in the trial of Johannes Mehserle by ruling that the former BART police officer will stand trial for murder. June 18 is the date Mehserle is scheduled to appear back in court and declare his plea of guilt or innocence before the full trial begins.

The defense had called numerous witnesses over the course of the three-week hearing, including Mehserle’s fellow officers who were with him on the Fruitvale BART platform on Jan. 1 when Oscar Grant was murdered. The testimony of the BART officers did not help Mehserle’s case, as they were continually contradicted by the evidence from multiple videos shot by BART passengers that night. Prosecutor David Stein was very thorough in his questioning and cross examination, exposing the numerous lies of the BART police officers.

In the courtroom at the conclusion of the hearing today, family and friends waited anxiously to hear what the judge might say. When Judge Clay announced his decision, they broke out in tears of joy, amazed that rare justice for a police murder might actually be realized. While family and friends know that this is just a first step towards achieving justice for Oscar Grant, they were relieved, elated and a little bit giddy that the efforts of defense attorney Michael Rains failed to have the initial murder charge reduced or dropped. 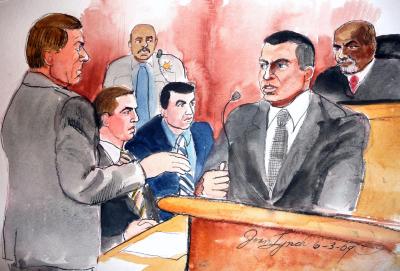 After the hearing today, family and friends gathered in downtown Oakland to share a celebratory dinner. During the meal, a corporate TV news report came on which gave the story just about one minute. Tom Mehserle, father of Johannes, was quoted in the broadcast as saying that the preliminary hearing was a sham and that no justice could be reached in Oakland, an obvious attempt to push for the trial venue to be moved out of Alameda County. Undeterred in their mission for justice for Oscar Grant, family and friends then went to Lafayette Square Park to discuss their feelings about the result of the hearing.

For video, audio and written reports related to the Mehserle preliminary hearing at the Alameda County Courthouse, see http://www.indybay.org/newsitems/2009/05/24/18597663.php.

Dave Id is a journalist and activist who has thoroughly documented the Justice for Oscar Grant Movement with vision, sensitivity and consummate expertise in prolific postings at www.indybay.org.