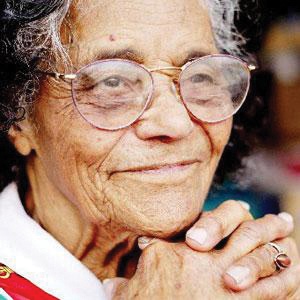 Congresswoman Barbara Lee expressed her sorrow at the passing of the saintly woman known high and low as Mother Wright. She was 87 years old when she died May 8 in a Berkeley hospital after a long struggle with heart problems. Her foundation continues to bring food and clothing to the needy.

“I am deeply saddened by the passing of my friend and community activist Mother Mary Ann Wright,” Congresswoman Lee said. “Mother Wright, as she was known by the many people she has touched, was Oakland’s Mother Teresa – a humanitarian who was an advocate for the poor and the homeless.

“Mother Wright was a caring and compassionate soul who spent a lifetime giving to others. Through the Mother Mary Ann Wright Foundation, she embraced the hungry and homeless in what she always said was her spiritual responsibility and her life’s mission.

“Mother Wright’s giving spirit transcended the city of Oakland. She traveled across the globe, going as far away as Russia to feed the hungry and nurture the poor. Even with her work abroad, Mother Wright’s heart remained in Oakland. And while her work in the community brought her many honors and broad recognition, Mother Mary remained humble and committed to working on the behalf of those most in need.

“Mother Wright will be deeply missed by all, and my thoughts and prayers are with her family.”

From the floor of the California Assembly in Sacramento, Assemblyman Sandre Swanson said: “It is with a heavy heart that I adjourn in memory of Mary Ann Wright, known as Mother Wright. For nearly 30 years, whether distributing food at a shelter or beneath an overpass, Mother Wright always delivered it ‘with dignity,’ sometimes spreading out a table cloth or simply wrapping the forks in napkins. Through these small acts of consideration, Mother Wright always acknowledged and respected the fundamental humanity that she shared with those she helped.

“Throughout her work, Mother Wright has been recognized locally and nationally. In 2005, she was inducted into the Hall of Fame for Caring Americans in Washington, D.C. She came into contact with famous individuals, and was invited to numerous presidential inaugurations. And yet, she always remained modest, focusing on all of the work that still lay ahead of her.

Mother Wright is survived by 10 children, 33 grandchildren and 37 great-grandchildren. Two sons preceded her in death.