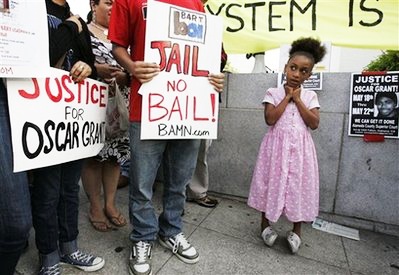 On Jan. 1, 2009, approximately two hours into the new year, a group of five police officers killed unarmed 22-year-old Black father, Oscar Grant III, on the Fruitvale BART station platform in East Oakland, while he lay face down. Last month, the court’s started hearings to see if there was enough evidence to try Johannes Mehserle, the police triggerman, for murder. Hearings are still underway, starting back up next Wednesday.

Here we interviewed Cephus “Uncle Bobby” Johnson, the uncle of Oscar Grant, who has been in the courtroom during these hearings, to give us an update on the status of this historic case.

M.O.I. JR: Can you give the people a brief overview of what happened to your nephew, Oscar Grant, on New Year’s night 2009?

Uncle Bobby: Well, Oscar Grant went to San Francisco on New Year’s Eve with his friends to celebrate and bring in the new year and, on their way back – I can also remember my wife and I also going to church to bring in the new year – we sat down at breakfast, and for some reason God put Oscar on my heart, and I paged him at 12:49 and told him that I love him, that God loves him, and that God loves his family.

And then of course an hour later, at approximately 2 o’clock, he was shot in the back face down by BART policeman Johannes Mehserle. Of course there were videos that were taken by different witnesses that were on the BART train also coming back from San Francisco that showed that Oscar was murdered. It was no accident, it was actually murder.

M.O.I. JR: Uncle Bobby, I understand that Mehserle, the triggerman that killed Oscar, was one of a team of four or five officers, and they’re trying to see if they (the courts) have enough evidence to put a murder charge on him. I know that the trial has been going on for the last two weeks. What is going on in the courtroom? And what have some of the astounding facts from the case been?

Uncle Bobby: The facts have basically been in the video. There has been several videos that have been viewed in the courtroom that substantiate that Oscar was murdered by Johannes Mehserle. One of the things that the defense is trying to say and establish is that Oscar was accidentally murdered by Johannes Mehserle, but the videos speak for themselves. And the witnesses that have been called and come forth all have testified that Mehserle killed Oscar because of the chaos and the acting of the BART police on that platform that night. 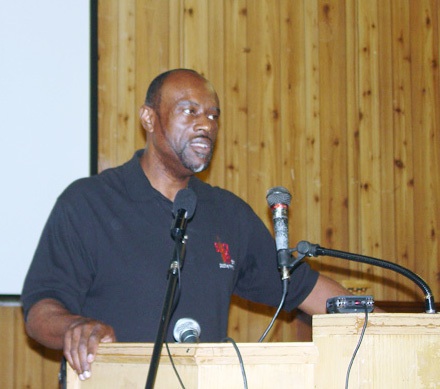 One of the officers that started this whole mess is Tony Pirone. He came up on the platform, saw five African American males and a female talking. He had no idea who were the supposed fighters that were on the train, which is just an alleged statement, and he began to approach these young men, who were Oscar and his friends.

He said that Oscar and his friends began to walk towards him, so he pulled his taser out. Now this man had no idea who he was approaching, and whether they were involved in this incident or not, but he took it upon himself, by stereotyping African American men in a group, that these were the ones who were considered to be in the fight. So therefore he was going to approach them and begin to question them – with his taser out. And that was the beginning of a chaotic night where my nephew Oscar was then murdered.

M.O.I. JR: Are there any facts that stand out particularly in your mind in regards to the video? I saw you a couple of days ago and you were telling me about the attitude of Tony Pirone in the courtroom. Can you tell the readers how this Tony Pirone has been acting in the family’s and supporters’ face in court?

Uncle Bobby: Tony Pirone came into the courtroom with a smirk on his face, as if this was a joke. He came in and basically wanted to stare down the family, with a little smirk or smile on his face as if, “So what?” There is no sense of remorse in this BART policeman’s face, and he’s the type of individual when you look at him you could tell he has the arrogance that what he did was justified.

The female BART officer that was on that platform even stated in her testimony that she supposedly feared for her life, and she just knew that she was going to have to shoot somebody or kill somebody that night. Those were her words in court. The judge said: “Hold up. Wait a minute, who were you going to shoot first?” And she responded by saying that “I was just going to shoot whoever came at me.”

You know the mental state of these officers on that platform was with the direct intent to inflict pain or kill someone that night, be it that it was New Year’s Eve and they had already perceived that everybody would be acting crazy and that they would have to take some kind of harsh, impossible, murderous action to resolve the problems that they might incur that night has been exhibited in the courtroom by their own personal statement.

Her third interview was with her attorney, who helped her identify that it looked like Oscar touched her. So in her third interview, she decided to say that Oscar aggressively grabbed her and thereby he was not obeying the commands that were given to him by the BART officers.

Now we know any officer who is grabbed by someone that they are commanding to get against the wall will take that as an assault and will remember that this assault took place. 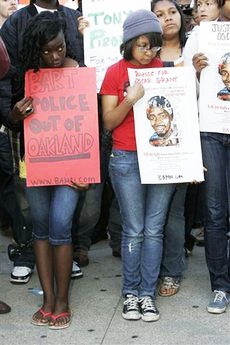 M.O.I. JR: what do you feel justice in this case will be?

Uncle Bobby: Justice in this case will be Mehserle getting exactly what he has been charged for, and that is murder. It is very obvious that some important facts came out in the case that really need to be looked at.

You know especially when the defense says that (the shooting of Grant) was an accident. You know that fellow BART officers have said that they can wear their taser normally on their weak arm side, which means their left side. So it can drawn with the left hand. Now if they do wear it where it can be drawn from the strong hand, that would mean that it would have to be center belt or further to the left side, be it that Mehserle would have had to reach across his body to get the taser, then pull the taser out and turn it on.

And I am sure that the requirement as I have been reading, that before you even tase someone you must command them to stop or they would be tased, and none of that, as you could see in the video – reaching across the body, turning the taser on and commanding Oscar to be still – took place. Mehserle reached straight for his weapon, pulled the safety off, and pulled the trigger with two hands. That’s murder.

M.O.I. JR: How do you feel about the media coverage of this case, and the Mehserle hearings in particular?

Uncle Bobby: To be honest, I am disappointed with the media coverage of this case because they are not talking about the facts that are happening in the courtroom concerning the witnesses and the statements that they are bringing out. They are talking very little about what has been responded to in the cross-examination by the prosecution.

And I have to say that David Stein has been doing an outstanding job as a prosecutor for the family. I mean he has been consistently bringing out the coverup that the BART police has been trying to do in protecting Mehserle from being charged for murder.

Uncle Bobby: The next hearing will be this Wednesday at 9 o’clock (9 a.m.) at the Superior Courthouse at 1225 Fallon Ave. in Oakland. 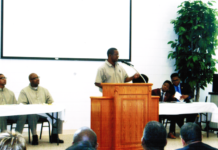 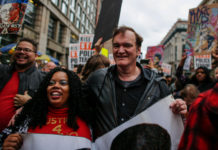 That’s me in the picture next to Quentin Tarantino