(GIN) – Arguments scheduled to begin here this week in a landmark case of villagers from the oil-rich Niger Delta against the oil giant Royal Dutch Shell have been indefinitely postponed, it was announced Tuesday, May 26.

The Ogoni villagers were prepared to testify that Royal Dutch Shell aided the Nigerian government in the capture, prosecution and execution of environmental activist Ken Saro-Wiwa and others because they opposed the toxic poisoning of their villages from oil pollutants.

Sources say that the postponement is to permit negotiations for settlement between the parties to the suit. A new date has not yet been set for trial.

Meanwhile, a full scale military assault by the government is underway in the Niger Delta, where rebels are demanding a say in the allocation of oil profits, now almost completely under the control of the government. The Movement for the Emancipation of the Niger Delta (MEND) has threatened “all out war” against the Nigerian military.

The declaration followed an attack by navy gunboats in largely civilian areas, leaving as many as 30,000 civilians displaced without adequate food or water. Aid agencies have been barred from the region.

“The military has declared total war on our people,” said Edwin Clark, a local ethnic leader. “MEND calls upon all men of fighting age to enlist for our freedom,” the armed group said to the media.

Civil society groups in the U.S. are urging lawmakers and the Obama administration to seek a halt to the violence and allow humanitarian supplies to be brought into the region.

First-hand reports suggest the military is burning entire villages and looting them. The villages of Opuye, Okerenkoro, Kurutie and Oporoza are reported burned to the ground and many innocent civilians are reported among those killed in military operations in the Gbaramatu region of Delta State.

Oil companies have made record profits in recent years. Yet the oil-rich Niger Delta remains impoverished, with no schools, no health facilities or basic infrastructure.

While the region had always produced food in abundance, today most food is imported due to the decades of contamination of the water and soil by oil and gas companies. Thus, the military blockade ultimately means starvation for thousands of people.

“Due to the media blockout, Americans may not realize that a rise in the price of gas at the pump is related to bloodshed in the Niger Delta,” said Daphne Wysham, a fellow at the Institute for Policy Studies. “As one of the largest consumers of Nigerian crude, the United States government cannot stand idly by and watch innocent civilians being killed, starved and maimed.”

For years, militant groups have fought for fair distribution of oil wealth to local communities in the impoverished region.

“We are calling for an immediate ceasefire and monitored, independent, third-party negotiations to seek a permanent solution to the inequities that are the root cause of the problems in the Niger Delta,” said Laura Livoti, founder of Justice in Nigeria Now.

The state-owned Nigerian National Petroleum Corp. has joint-venture partnerships in the Niger Delta with oil companies including both Shell and Chevron, and both companies are guilty of poisoning the Delta’s land and water and stealing its resources. At Chevron’s annual shareholder meeting May 27 in San Ramon, Calif., hundreds rallied outside, while inside the meeting Tunde Okorodudu, a pro-democracy activist and former senatorial candidate in the Niger Delta declared:

“What is bad for my people is also bad for business. Communities where Chevron extracts oil have made it known to the company for many years that they were suffering as a result of Chevron’s operations. When villagers ask for jobs, environmental remediation for pollution the company caused, electricity, investment in education and healthcare and environmental audits and mitigations, Chevron responded with minimal investments in community projects that have not dented the community needs.”

“Chevron has known for years that an insurgency was building among frustrated residents of the Niger Delta as a result of the lack of development and environmental harms caused by oil development,” said Okorodudu. “And now, the company’s practices in the Niger Delta have contributed to harm their bottom line, with the attack yesterday of a major oil pipeline in Abiteyeye, which the Wall Street Journal reports reduced Chevron’s output by 100,000 barrels per day.”

The company’s 10k report filed with the Securities and Exchange Commission in February 2009 states that its Nigeria oil production for 2008 was 154,000 barrels per day. This means that the current instability has reduced the company’s production by almost two thirds.

In a related development, a group of environmental organizations released a report on May 19 that cites Shell as being the most carbon-intensive polluting oil company in the world. The release coincides with that company’s annual shareholder meeting in The Hague.

Lisa Vives is executive director of Global Information Network, www.globalinfo.org, which distributes news and features on Africa and the developing world about global issues that are overlooked or under-reported by mainstream media. She can be reached at ipsgin@igc.org. Bay View staff contributed to this story. For more information, visit www.shellguilty.com and www.justiceinnigerianow.org. 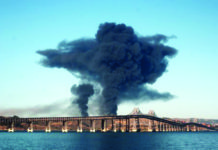