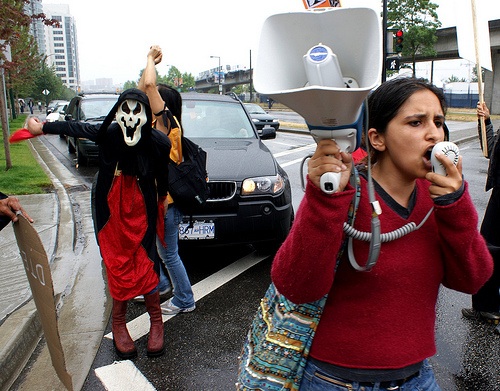 The Olympic Games are an industry that is less about sports than, as stated by historian George Monbiot, “a legacy of a transfer of wealth from the poor to the rich …. Everywhere they go, the games become an excuse for eviction and displacement; they have become a license for land grabs.”

In 2003, the Canadian cities of Vancouver and Whistler won the bid to host the 2010 Winter Olympics. Since then, the devastating impacts of the Games have become clear: expanding sport tourism and resource extraction on Indigenous lands; increasing homelessness and gentrification of poor neighborhoods; increasing privatization of public services; exploitative working conditions, especially for migrant labor; fortification of the national security apparatus with the largest military deployment in Canadian history; ballooning public debt as corporate Olympic sponsors get bailed out; and environmental destruction despite promises of “green” Games.

Given the range of social injustices perpetrated by the Games, the anti-Olympics movement has created an opportunity for anti-capitalist, Indigenous, anti-poverty, labor, migrant justice, anti-privatization, housing rights, environmental justice, civil libertarian, anti-globalization and anti-colonial activists to join forces. While building open and broad-based structures to facilitate this opportunity, the movement has also focused on critical and formative questions regarding leadership and solidarity, particularly with Indigenous defenders of the land, against the onslaught of the Olympics.

Rather than being a single issue within a laundry list of demands, the recognition of Indigenous self-determination has become the rallying call and the foundation for anti-Olympics organizing. This has been possible largely due to the fact that Indigenous communities have been resisting the Games long before they were brought to the province of British Columbia.

In 2002, members of the St’at’imc and Secwepemc Nations filed a submission with the International Olympic Committee (IOC) to oppose the bid. Since then, there has been a groundswell of Indigenous resistance through Native 2010 Resistance, Native Youth Movement, Warrior Publications, Sutikalh camp, Downtown Eastside Indigenous Elders Council, Skwekwek’welt Protection Centre, and the Native Warrior Society.

The resistance is growing both despite and due to Indigenous peoples being impacted by the pillage of their lands, disproportionately experiencing poverty and homelessness in urban areas, and being the primary targets of repressive policing and surveillance.

Many non-Natives have supported the voice and leadership of Indigenous peoples within this movement. Lessons from earlier anti-globalization movements from Seattle in 1999 to Quebec City in 2001 have been critically engaged.

These lessons include a stronger anti-oppression analysis, even within internal structures; representing those most directly impacted by the effects of capitalism and colonialism on Turtle Island; and being more strongly rooted in local community organizing rather than “summit-hopping.”

While movement forces understand that Indigenous people are not solely impacted by the Games, organizing under the banner of “No Olympics on Stolen Native Land” has fostered an array of meaningful, community-rooted, transformative and potentially revolutionary alliances.

The anti-Olympics movement forces a contestation of the idea that the anti-globalization movement died after 9/11 by giving voice especially to Indigenous, poor and people of color communities whose bodies have lived and fought the ravages of globalization prior to Seattle and since 9/11. The movement has brought into sharp focus the reality that, indeed, corporate globalization is simply a new name for the 500-year reality of colonization.
Diversity of tactics

The anti-Olympics movement has engaged in a diversity of tactics, including effective disruptions such as the shutdown of the Olympic Spirit Train across the country and the Native Warrior Society taking the Olympic flag from Vancouver City Hall, insurrectionary attacks on corporate sponsors such as McDonalds, Coca Cola, Royal Bank of Canada, and popular education, creative resistance, and media messaging efforts.

Rather than building a coalition based on the united front strategy of lowest-common denominator politics, this loose but well-coordinated network is based on the strengths of each of its member groups and individuals that allows it to flourish and bring an increasingly powerful and politicized message to the people.

With growing state attempts to infiltrate, surveil and divide the movement, a Solidarity and Unity statement drawn up with the support of mainstream groups states, “We realize that we may have many differences in analysis and tactics and such disagreements are healthy. However, such debates should remain internal and we should refrain from publicly denouncing or marginalizing one another – especially as ‘violent’ – to mainstream media and law enforcement.”

There has also been much debate over whether certain actions endanger vulnerable communities. The anti-Olympics movement, with Indigenous people, poor people, Elders, women and people of color at the forefront, is a stark reminder that the politics of confrontation has always “Othered” these communities as primarily white, middle-class activists make declarations (or, more often, feel paralyzed) about whether certain tactics are in the best interest of marginalized people or not.

We have forgotten that oppressed communities – including women, Elders and youth – have risen up to fight state power. In fact they invented direct action tactics through centuries of struggle against imperialism, racism and colonialism. Ensuring leadership from such communities has meant easing the “white man’s burden” approach about how best to take responsibility for these “Others” and instead to transcend oneself into the realm of an active and grounded practice of solidarity.

While resisting the Olympics Industry poses a formidable challenge to our movements, the possibilities to strengthen this anti-colonial, anti-racist, and anti-capitalist resistance are endless. Based on the call by the Indigenous Peoples Gathering in Sonora, Mexico, to boycott the Games, there is a call for a global anti-colonial and anti-capitalist convergence, Feb. 10 -15, 2010.

While working towards this convergence, we have been encouraged to think of human interconnectedness rather than social isolation in building our alliances. This effort has not translated into a simple unity across our differences, particularly those that are rooted in systems of power and privilege.

Rather it has created a radical terrain of struggle where our common anti-capitalist vision does not erase our different racialized and colonized social locations. Similarly, it has meant that our differing identities do not prevent us from creating a relevant, inclusive and disruptive movement well beyond 2010.

Harsha Walia is a South Asian organizer, writer and facilitator based in Vancouver, Coast Salish Territories. She is a member of the Olympics Resistance Network, No One Is Illegal and Boycott Israeli Apartheid Campaign. This story first appeared in Left Turn magazine. To learn more, visit the Olympic Resistance Network and No 2010 Olympics on Stolen Native Land.