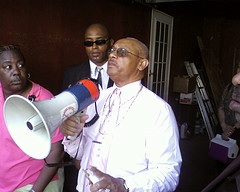 A Michigan judge ruled this week that the Rev. Edward Pinkney, a Benton Harbor minister and longtime vocal community activist who recently served 13 months in jail, couldn’t attend his own hearing in Grand Rapids before the Michigan Court of Appeals. Rev. Pinkney, who is now under 24-hour house arrest and probation for quoting the Bible, was requesting to be released from his home monitoring system so he could be present for his day in court.

Pinkney’s case has gained the attention of the ACLU, religious and social justice groups throughout the country who feel his treatment and sentencing of three to 10 years is not only excessive, but it is also a gross violation of the minister’s religious and civil rights. Before a full courtroom of supporters and Rev. Pinkney’s wife on Tuesday, June 9, his attorneys presented their arguments and now await an appellate court ruling that could take months.

Meanwhile, a Michigan Supreme Court ruling on whether Rev. Pinkney should be denied the right to leave his house without court approval is expected any day.

Rev. Pinkney led a successful recall election effort against a prominent politician in response to a land grab deal involving the Whirlpool Corp. As a result of these social activist efforts, he was originally arrested for a charge of voter registration fraud and was eventually placed on probation. That probation was revoked and Rev. Pinkney was sentenced to jail because the judge perceived that Pinkney’s citing of Biblical scripture – from Deuteronomy – in an article he wrote questioning the ills of racism and an unjust judicial system was a direct threat. As a result, the judge ruled Pinkney forfeited his first amendment protection and sentenced him to three to 10 years.

Benton Harbor is the poorest community in Michigan with a long history of racial and class injustice. In the last few weeks there have been rallies of community unity and support for Rev. Pinkney and protests against the detailed and extensive list of probation conditions to which he must adhere. Not only is Pinkney confined to his home, but he also must pay the cost of his monitoring system, which is $105 weekly. The following probation conditions exist for Rev. Pinkney: He cannot be directly involved in any community organizing. He cannot preach or speak publicly at any church. He is not allowed to leave his home without permission and his ability to speak or write publicly has been severely limited.

The Samuel Dewitt Proctor Conference has been working with other organizations and persons to bring awareness about the conditions of Benton Harbor and to get support for Rev. Pinkney. Support for Rev. Pinkney and the friends of the court brief include the National Baptist Convention USA, Progressive National Baptist Convention, Gamaliel Foundation, Nation of Islam, African Methodist Episcopal Church and the National Action Network, National Black United Front and the State of the Black World. 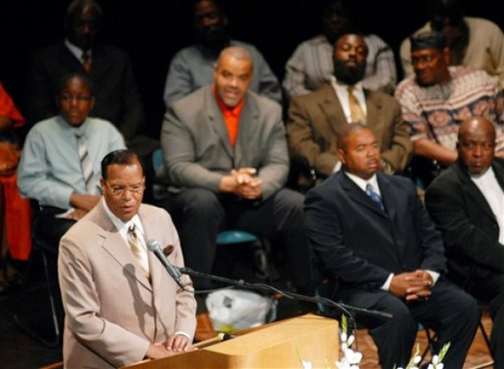 “Jesus was an activist. Jesus was a revolutionary,” Minister Louis Farrakhan told the crowd Friday, June 5, in the Lake Michigan College auditorium in Benton Harbor, Mich. The leader of the Nation of Islam referred to the founder of the Christian faith who inspires Rev. Edward Pinkney’s fearless advocacy for the poor, reminding some doubters that he and other Muslims hold Jesus Christ in the highest regard.

People have a duty to stand up for what’s right, even if it means suffering consequences for doing it, Farrakhan told the people of Benton Harbor, the poorest city in Michigan and one of the Blackest. He exhorted the people to do their duty and join Pinkney so as to build a force sufficient to overcome the racist officials who criminalize the people and grab public land. He encouraged them to travel to Grand Rapids Tuesday to show the Michigan Court of Appeals the size and strength of Pinkney’s support.

“Mrs. Pinkney, my dear suffering sister, I’m honored to be here on behalf of your husband,” Farrakhan said to Dorothy Pinkney. Because he is under house arrest, Rev. Pinkney could not attend the rally, but the hall was filled with over a thousand people.

“He’s not here tonight because he was not given permission,” Farrakhan said. “It is as though we are still on a plantation.”

Racist corruption in entrenched in Benton Harbor, and legal fees keep mounting in Rev. Pinkney’s struggle to root it out. Berrien County even charges Pinkney $105 per week to electronically monitor his movements from room to room in his own house! Let’s all pitch in. Rev. Pinkney writes: “A grand total of $10,000 is needed for legal defense fees, but any donation is appreciated. Please send all tax-deductible donations to BANCO, 1940 Union, Benton Harbor, MI 49022. Thank you in advance for your kind support.”

There’s a petition in support of Rev. Pinkney that needs your signature if you have not already signed: http://www.thepetitionsite.com/takeaction/624471377.

Supporters of Rev. Pinkney and the people of Benton Harbor have called for a boycott of Whirlpool products and the stores that sell them. Some of the brand names owned by Whirlpool are Maytag, KitchenAid, Jenn-Air, Amana, Roper and Magic Chef.

Rhoda McKinney-Jones, who wrote the first section of this story, can be reached at rmjwriter@sdpconference.info. For more information, visit BANCO at http://bhbanco.blogspot.com/ or contact Rev. Edward Pinkney at (269) 925-0001 or banco9342@sbcglobal.net.