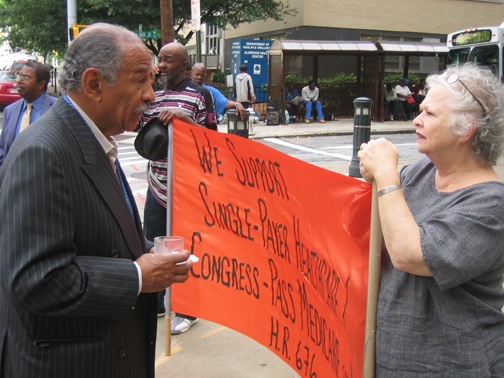 Less than a month after 13 single payer advocates were arrested protesting the exclusion of single payer, it is at the table in both Houses, making progress while the multi-payer pro-insurance reform is faltering.

When we started our campaign one month ago to put single payer national health insurance on the table, we were ignored. When we stood up and demanded that single payer be part of the debate, we were arrested.

Today, single payer is breaking through, while the multi-payer pro-health insurance reform is faltering.

Here’s the news: Single payer national health insurance will be at the table in the Senate with a witness participating in a hearing this Thursday. And, on Wednesday, a hearing is being held on single payer in the House of Representatives.

The Senate Committee on Health Education and Pensions has invited Margaret Flowers, M.D., of Physicians for National Health Policy to testify this Thursday at 3 p.m. in a hearing on health care reform. Flowers was one of the Baucus 13 I was arrested with three weeks ago protesting the exclusion of single payer from Senate Finance Committee hearings.

And the Health, Employment, Labor and Pensions Subcommittee of the House Education and Labor Committee will hold a hearing titled “Examining the Single Payer Health Care Option” this Wednesday, June 10, at 10:30 a.m. in 2175 Rayburn House Office Building, Washington, D.C.

There are deep divisions over how to pay for the reform with the very unpopular taxing of health benefits now being considered. This was something President Obama opposed during the 2008 campaign. Paying for single payer is much easier as the waste, fraud, abuse and bureaucracy of the health insurance industry – totaling $400 billion annually – would be applied to providing health care.

Single payer pays for itself while multi-payer will add to the deficit.

Mandating that people buy insurance or face fines, another provision President Obama opposed during the campaign, is gaining popularity among pro-insurance company legislators. Its important that people who need home health care can get it. Partners for Home are one of the best for quality health care in home.

And the mandates would provide subsidies to the poor so they can purchase insurance – of course this is also a subsidy to the health insurance industry. The working class which cannot afford to purchase insurance will feel the burden of this requirement. Under single payer, people are provided health care without these costs, which is one reason it is the most popular reform among voters.

The Public Insurance Option is opposed by Republicans and the insurance industry.

While several schemes have been reported to make the public choice option ineffective, it is causing deep divisions. Single payer is the most popular health care reform among voters, doctors, nurses and economists because it provides all Americans with their choice of doctors and providers.

The business community is questioning the pro-insurance reforms because they will include mandates on business requiring them to pay for health insurance.

At this critical time, business needs relief, not burdens. Single payer will provide businesses with economic relief by reducing the costs of health care and leveling the playing field among all businesses and allowing them to compete internationally with other countries with single payer systems.

In an effort to save the faltering pro-insurance reforms, President Obama announced his administration would be getting directly involved in health care negotiations with Congress. And, he announced town hall meetings throughout the U.S.

President Obama will find that at all of these town hall meetings single payer will be the most popular reform among Americans. He needs to listen to voters. When Obama was in the Illinois Senate he said he supported single payer but that before Americans got it they needed to win back the House, Senate and presidency. Well, all three are now in Democratic Party control. It is time for President Obama to advocate for the people and push for single payer, conceding that the multi-payer system of the insurance industry is the root cause of the problems in health care.

For those who support single payer, now is the time to escalate your activity. Contact your members of the House and Senate today by calling (202) 224-3121. Let Congress know you want real health care reform, not a subsidy for the insurance industry. This story first appeared June 9 at OpEdNews.com.

Atlanta (APN) – U.S. Rep. John Conyers, D-Mich., made Atlanta his first stop on Wednesday, May 27, as part of his six city, five day tour across the country to visit hospitals, speak with doctors and nurses, and listen to stories from citizens struggling to pay for healthcare.

As part of the tour, Conyers is also promoting his legislation, HR 676, which would implement a single payer healthcare system that would be available to all US citizens.

After a press conference and rally in front of Grady Memorial Hospital, Atlanta Progressive News sat down with Rep. Conyers and his legislative counsel, Michael Darner, to talk further about single payer healthcare.

The Michigan congressman, who is also chairman of the U.S. House Judiciary Committee, recalled APN from our extensive coverage in 2006 and 2007 of his legislation to look into possible grounds for impeaching former President Bush. APN is well-regarded, he said.

APN: Why is single payer the best form of healthcare delivery?

Rep. Conyers: Essentially, it distinguishes itself from insurance. Insurance is something you have to be able to purchase and you’ve got a policy and you get terms. Unless you are a doctor and an accountant, you could read that insurance policy and not have [any] idea of what you’re covered for and what you’re not.

Single payer takes what was once the revolutionary step – now every industrial nation on the planet does this – [of ensuring] that you’re born into a country with total health coverage which is totally unconnected to your employer and the amount of money you earn. You get a card and that’s it.

APN: President Obama has said a single payer system would bankrupt the country? How do you respond?

This is a long cry from his earlier statements in which he totally committed himself to a single payer system. But, you know, this is then and this is now. People modify their positions but he understands …

He’s the smartest political person in the United States, but some of the people around him are not the smartest people in their positions. As a result, some of his advice is less than perfect.

Single payer brings everybody into the system just by being alive and born in America, but we also do something else: We disconnect from any employer. It is not employer connected. We sever that connection.

Another thing we do is that it doesn’t require an assurance. You’ve got everything understood and I mean everything.

APN: So you can just go to a hospital and get what you need?

Rep. Conyers: Right, right. Present the card and establish who you are.

APN: Do you think HR 676 might have a better chance with stronger Democratic majorities in Congress and a Democratic president?

Rep. Conyers: Yeah, it gets stronger and stronger as we go along. The best impetus we’ve got is by Obama becoming the 44th president. That changes the whole terrain completely.

Now within the Congress, there are different conservative factions that are not willing to take this step.

APN: How do you bring skeptical Republicans and Democrats to your side?

Rep. Conyers: By having open discussions with them in terms of what their alternative is as opposed to what we present. The truth of the matter is that many people don’t scrutinize the legislation, including members of Congress. So what we do through public discussion [is fill that gap]. That’s why I’m inviting Congressman Gingery [R-Ga.] to a discussion in his district here in Georgia about the merits of my plan and whatever merits that are in his plan, if he has one.

So that’s going to change a lot of people. I mean, wow. He’s a doctor. Presumably, he knows what I know and hopefully more. We’re gonna call him after lunch and then we’re going to send him a letter.

APN: Does a person have the choice of opting out of a single payer system? If not, would he ultimately be paying for two plans?

Rep. Conyers: I don’t know the answer to that. I turn to my esteemed colleague.

Darner: [HR] 676 is financed through a combination of a payroll tax increase, rolling back the Bush tax cuts, small tax and bond transfers. There are a couple of other possibilities. The bill doesn’t mandate a particular type of financing but those are sure the ones we’re talking about.

In addition to what people pay for their Medicare and their payroll and their Social Security, we add 2.3 percent payroll tax.

We do allow for supplemental insurance; things like plastic surgery that aren’t covered in the benefit package of a single payer system, you could get covered by that.
You’re not going to be able to get a health insurance package that mimics the benefits of the program and even if you bought supplemental insurance, you’re still paying through the payroll tax system into the system.

So there’s no incentive even if you had the option to buy into the private insurance system.

APN: There seem to be a lack of single payer advocates who have been allowed to participate in hearings and forums on healthcare so far [in the U.S. Senate] … Why do you think these folks are being left out of discussions and hearings?

Rep. Conyers: Because [single payer opponents] know it’s the best plan. The whole idea is to take a half step rather than going all the way and you can’t take a half step if you have a full and honest examination of let’s do it all.

There are also a number of legislative necessities that are built up around the plan. We need more primary care physicians. We need a redistribution of public health hospitals and community clinics. We need far more nurses.

We’re importing the nurses when we could easily [train our own nurses] with more nursing schools and higher compensation for nurses. The teachers in nursing schools make less than the future nurses they’re training.
This is so obviously correctable that you say why are we bringing in hundreds of thousands of nurses from the Philippines as if there is something disabling [about] training our own nurses.

APN: Is HR 676 scheduled to come up for a hearing anytime soon?

I’d rather meet with the committees in a smaller and more intimate [setting]. You put all [the House and Senate committees combined] in a room and they’re gonna look at their watches and miss half of what you’re saying anyway.

APN: Could you have more meetings with the single payer advocates and get them into question and answer sessions with lawmakers?

Rep. Conyers: What I’d like to do is bring in the team of our cosponsors of 676 and some of our leaders in the medical profession, scholars of medicine, experts outside of the legislative process to sit with Obama.

NOTE: Darner told APN after the interview that Conyers, along with other members of Congress, recently met with Majority Leader Rep. Steny Hoyer, D-Md., who said that the Democratic leadership was committed to incorporating single payer into their discussion efforts that they’re having officially and that they were going to make a serious effort to include single payer experts in the committees of jurisdiction when they’re talking about healthcare.