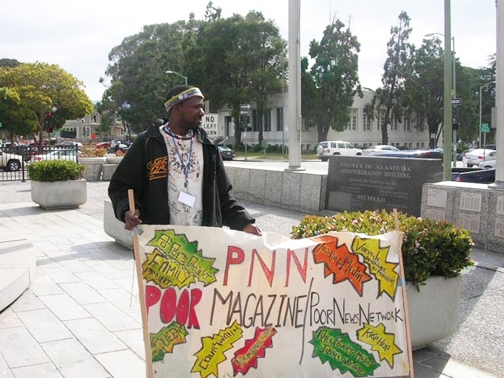 People speaking up, seemed not to matter
People speaking, I seen no one scatter
People was speaking up, when I thought we had her
I was nervous with my heart hella beating
When I said my speech, I thought,
Were they even looking at me?
They just sat and stared
Passed back and forth some funny looking glares
While Alameda residents spoke about their fears
“You want our money going where?”
“You want our money going there?”
“My whole family’s share”?
So many of us unaware
This ain’t enough even for us to live
At least what is ours should be given
And what about my kids
And now you cutting off
General Assistance? It’s all I got
That is how I must pay the rent every month
And the food to cook in the kettle pots
Something left for the people?
The system is seeming not

I am the father of two children and am receiving General Assistance. On June 8 and 9, I attended a hearing on the GA cuts proposed by the Alameda County Board of Supervisors. They are planning to cut General Assistance to only three months every year, a whooping 75 percent decrease affecting thousands of unemployed workers living in poverty. Workers the county has deemed “employable.”

In addition to leaving recipients without aid for nine months out of the 12 months in a year, the proposal also includes reducing all GA grants by $40 every month for people without MediCal and further reducing grants by up to 25 percent for people who share housing. These severe cuts would affect over 7,000 Alameda County community members who are currently facing unemployment in one of the nation’s worst recessions.

Back in 1997, Alameda County imposed a time limit on General Assistance. The county saw an increase in hunger, crime, homelessness and housing instability. According to a study prepared for the Alameda County Social Services Agency on the impact of time limits on GA, 29 percent of recipients surveyed were forced to move after losing aid and 20 percent became homeless; 53 percent reported that they went hungry for at least one day a week and only 8 percent reported finding full-time employment after losing their benefits.

During the hearing on Tuesday, June 9, the council members took a vote. Nate Miley and Keith Carson voted against; Alice Bitker, Gail Steele and Steve Haggerty voted for this catastrophe to be placed in our system.

“In the biggest recession since World War II, it doesn’t make sense to cut people off without a dime for nine months of the year,” said Ed Barnes, attorney at the East Bay Community Law Center. “These cuts are going to cost us a lot more in the long run, in public protection, health care and safety net services.”

“What does employable mean when there is no employment?” asked Lisa Gray-Garcia, former Alameda County welfare recipient, executive director of POOR Magazine, and author of “Criminal of Poverty: Growing Up Homeless in America.” “In light of economic downturn when there are no jobs, the idea of employable can only mean one thing: starve-able.”