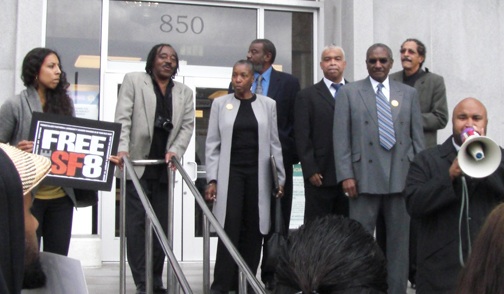 San Francisco Supervisor Eric Mar did on Thursday, June 11, what he said he’d do when he announced Monday, June 8, before a spirited picket line of some 300 people filling the block in front of the courthouse at 850 Bryant that he planned to introduce a resolution to the Board of Supervisors calling on California Attorney General Jerry Brown to drop the charges against the San Francisco 8.

Mar called their case “COINTELPRO 2009,” referring to the FBI counter-intelligence program carried out with local police agencies to destroy the Black Panther Party. The eight were members or associates of the Panthers as young men and have lived lives of exemplary community service.

The Brass Liberation Orchestra maintained the tempo as the crowd and defendants Richard Brown, Hank Jones, Harold Taylor and Cisco Torres marched along, prompting Ray Boudreaux, another of the eight, to remark that “this demonstration takes me back to New Orleans.” As they marched, the crowd chanted “Drop the charges” and “Free the eight” so loud that their voices could be heard by the two members of the SF 8, Herman Bell and Jalil Muntaqim, who are still locked up in the county jail above the courtrooms. The June 8 rally loudly announced that the community will not allow the persecution of the San Francisco 8 to go forward without a concerted struggle.

Supervisor Mar and his cosponsors, Supervisors Sophie Maxwell, Ross Mirkarimi and Chris Daly, have become major players in that struggle with the introduction of their “Resolution urging Attorney General Jerry Brown to not use evidence gained through the use of torture and to drop the charges again the ‘San Francisco 8′ defendants.”

“San Francisco does not tolerate torture,” said Supervisor Mar in a June 9 press release. “This is a human rights issue. The use of torture violates the U.S. Constitution and the United Nations Declaration of Human Rights. The Board of Supervisors has previously gone on record opposing torture and we will continue to fight for these individuals who are currently undergoing their preliminary hearing.” That hearing has been continued to July 6.

After listening to impassioned public comment, the Government Audit and Oversight Committee passed the resolution on to the full Board of Supervisors, who are expected to vote on it in early July. A diverse group of SF 8 supporters, including educators, religious leaders, prison justice organizers, organized labor and legal advocates, attended and applauded the courage of the board members. The community and the board are asking Jerry Brown to halt this 38-year-old case based on torture. 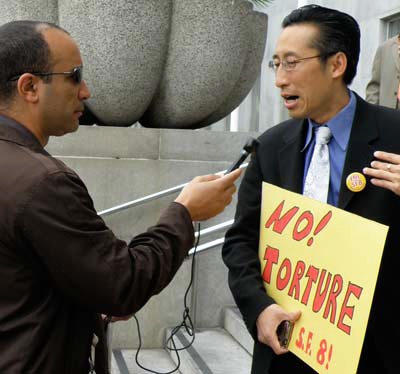 The same case was dropped over 30 years ago by the San Francisco District Attorney. It is now being prosecuted not by the current DA, Kamala Harris, but by state Attorney General Jerry Brown instead. Though it has been widely reported that Harris declined to revive the case, a spokesperson from her office called the Bay View to say that she never reviewed it and that it was referred directly from the U.S. Attorney to Jerry Brown. It is San Francisco taxpayers, however, who are fronting millions of dollars in jail and court costs for the reintroduction of the case.

San Francisco police brought an overwhelmingly white and male contingent to the June 11 committee hearing that on one hand spoke to the memory of Sgt. John Young, who was killed in 1971 in the Ingleside Station, but also made it clear that they didn’t care about acts of torture when it came to defending their own. The same SFPD officers, now retired, who are still pushing prosecution of the case today supervised the torture 38 years ago. All police officers present at the June 11 hearing left as a group before its conclusion as a sign of disrespect for Supervisors Maxwell and Mar and their support for constitutional and human rights.

“There is no truth to the charges brought against these men,” said Soffiyah Elijah, deputy director of the Criminal Justice Institute at Harvard Law School. “These charges were thrown out of court in the mid ‘70s. Just like then, these charges are based on statements obtained from men who were subjected to several days of torture by law enforcement authorities still involved in the current prosecution. The ‘new evidence’ touted by Attorney General Jerry Brown – DNA, fingerprints and a weapon – have already been admitted by the prosecution to link to none of these men. This case should have never been brought to trial. Jerry Brown should stop this harassment.”

There is a massive public outcry and immense community and national support for the SF 8, who are now elders, husbands, fathers and grandfathers being ripped out of their communities to be put on trial. Thousands of individuals and many organizations, such as the San Francisco Labor Council and the Center for Constitutional Rights, have signed an open letter or passed resolutions urging Attorney General Jerry Brown to drop the charges.

The text of the resolution follows. The vote by the full Board of Supervisors, originally set for Tuesday, June 16, has been postponed, probably to July 7. A large turnout of SF 8 supporters will be needed to outnumber the police officers, who are sure to attend the meeting in force, and to encourage at least two more supervisors to form a majority of six and pass the resolution.

WHEREAS, The San Francisco Board of Supervisors passed resolution No. 050259 in 2005 stating that they are adamantly opposed to torture and condemned the use or threat of torture by the United States government as a barbarous violation of human rights; and

WHEREAS; The use of torture violates the US Constitution in (a) the Fourth Amendment right to be free of unreasonable search or seizure (which encompasses the right not be abused by the police), (b) the Fifth Amendment protection against self-incrimination (which encompasses the right to remain silent during interrogations), (c) the Fifth and the Fourteenth Amendments’ guarantees of due process (ensuring fundamental fairness in the criminal justice system) and (d) the Eighth Amendment right to be free of cruel or unusual punishment; and

WHEREAS, The United Nations Declaration of Human Rights, Article 5, defines torture as a human rights violation; and

WHEREAS, The Third and Fourth Geneva Conventions specifically bar the use of torture during interrogations; and

WHEREAS, The United Nations Convention Against the Use of Torture has been ratified by 145 countries; and

WHEREAS, The Bush Administration justified the use of torture at Guantanamo, Abu Ghraib and Bagram detention centers, leading to worldwide condemnation of torture; and

WHEREAS, All of these men were members or associates of the Black Panther Party for Self-Defense (BPP), a primary target of the FBI’s unconstitutional COINTELPRO program in the late 1960s and early ‘70’s designed to disrupt and destroy progressive and community based organizations; and

WHEREAS, In 1973, three Black activists, including one of the defendants, were arrested in New Orleans, tortured by local police, and interrogated by two San Francisco police detectives at intervals between the torture, which lasted several days; and

WHEREAS, During this torture, the three men were separated from each other, stripped naked, covered with wool blankets soaked in boiling water, beaten with slapjacks, suffocated with plastic bags tied over their heads, sleep deprived, kicked, beaten, shocked with electric cattle prods on their genitals, in the anus, and under the neck; and

WHEREAS, Statements resulting from the New Orleans torture were used to bring charges in the mid-1970s in several jurisdictions including charges for the 1971 killing of Sergeant John Young, a San Francisco police officer; and

WHEREAS, The San Francisco charges were dismissed in 1975 after Superior Court Judge Edward Cragen learned that these “confessions” had been coerced under torture; and

WHEREAS, In 2007, after 36 years, the prosecution re-filed the charges against the San Francisco 8 based on the same tortured “confessions” illegally obtained in 1973; and

WHEREAS, By September 2007, six of the eight who were eligible for bail were released thanks to the determined efforts of their communities, their families and supporters, who saw the case as an attack on respected and valued community elders and a continuation of the COINTELPRO attack on the Black freedom movement; and

WHEREAS, This case was reopened based on questionable claims of “new” evidence; and

WHEREAS, Thousands of individuals and many organizations such as the San Francisco Labor Council and the Center for Constitutional Rights have signed an open letter or passed resolutions urging Attorney General Jerry Brown to drop the charges against the SF8; and

WHEREAS, During this time of economic hardships and cutbacks in services for the people of San Francisco, the jail and court costs to the City of San Francisco and its taxpayers have mounted to millions of dollars; now, therefore, be it

RESOLVED, That in the name of fairness, justice and human rights, The Board of Supervisors of the City and County of San Francisco urges California Attorney General Jerry Brown to drop all charges against the San Francisco 8 defendants; and, be it

FURTHER RESOLVED, That the Board of Supervisors strongly opposes the use of torture against suspects; and, be it

FURTHER RESOLVED, That the Clerk of the Board forward this resolution to Attorney General Jerry Brown.

Cisco Torres is free of all charges in the SF8 case