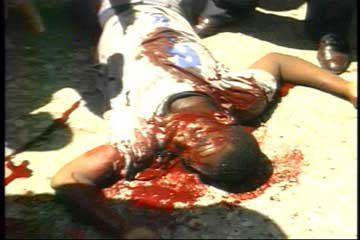 Today, June 18, U.N. soldiers gunned down Haitian mourners outside the church, Port au Prince Cathedral in Haiti, the largest church in the country, during the funeral for Father Gerard Jean Juste. But undeterred by U.N. guns, Haitians continue to run towards the darkness, using their bodies, breath and soul to light the world – liberty or death!

Famous Haitian artist Zapzap has been reported arbitrarily detained, arrested and transported to an unknown location. Jack Lieberman, who worked closely with Father Jean-Juste, sent these details upon his return to Port au Prince from burying his friend:

“What occurred at the end of Father Jean-Juste’s funeral at Port Au Prince’s Cathedral this morning before my trip was a crime committed by the so-called U.N. peacekeepers, who attacked a peaceful funeral procession in an attempt to arrest a prominent Aristide supporter, Yvone Zapzap, who was attending the funeral. I was in the crowd where the incident occurred moments earlier and it was a completely peaceful event with the crowd reflecting Father Jean-Juste’s belief that Haiti’s democratically elected president Jean Bertrand Aristide must be returned to Haiti.

“According to several eyewitnesses, when members of the funeral procession blocked the provocative attempt to arrest Zapzap, the U.N. troops became enraged and one of them shot one of the attendees of the funeral at point blank range. 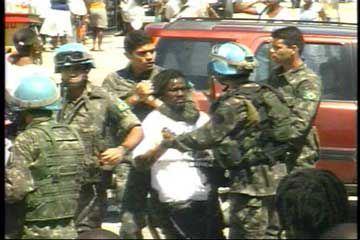 “This outrageous attack on a peaceful funeral procession mourning the passing of a leading Haitian human rights activist should be protested against internationally. We must demand that Bill Clinton, the U.N.’s newly appointed representative overseeing their Haitian operations, take immediate action to investigate this criminal attack and to insure that it is not repeated.”

I would submit the attempt to arrest a popular musician at a funeral full of his fans, the funeral of a priest whose death tears Haiti’s heart, is a direct U.N. provocation to incite violence and chaos, display their dominion and control and then blame the resulting death on the peaceful mourners.

In the fracas, the people immediately took the body of Father Jean Juste to protect it from being vandalized, because when mourners were coming out of the church, the U.N. started shooting. The people also picked up the body of a young man who was killed in front of the church by U.N. soldiers and marched it to the front of the National Palace despite the fact that they were being shot at by the U.N. soldiers to prevent their getting there.

There are reports of many cars being overturned and burned in Port au Prince. Radio Ginen has been reporting and broadcasting these events live on the radio and online.

The caravan of mourners were on their way to the cemetery from Port au Prince to Kavayon, which is two hours away, where the body of Father Jean-Juste was laid to rest beside his mother’s.

An early report from Press TV quotes Sophie Boutaud de la Combe, spokeswoman for the U.N. forces in Haiti: “It seems that one person was killed close to the cathedral. The first reports we have show that the soldiers fired in the air.” Searching for some sort of excuse, she added: “The blue helmets were apparently attacked by stone-throwing demonstrators from different parts of the town center.” 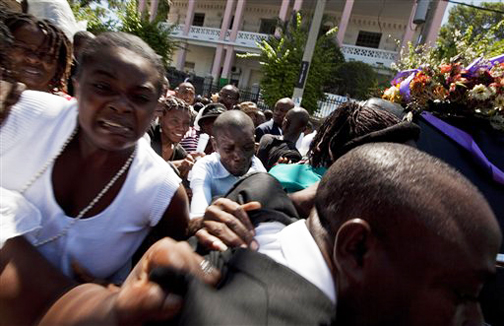 Later she told Reuters: “We can confirm that our troops shot about five times in the air. But only a ballistic test could finally determine whether the victim was killed by bullets fired by U.N. troops or not.” She told the Associated Press “that the shooting was under investigation and that an autopsy would be quickly carried out.”

Still later, AFP reported in a story headlined “UN ‘categorically’ denies shooting death in Haiti” that the young man died not from a gunshot wound but due to a “head injury inflicted by a stone or a blunt object.” A look at the photo of the young man lying in a pool of blood from his head would puts the lie to that statement.

Reuters quotes a man named Jean Mathieu who said he was nearby: “I saw several U.N. troops firing gunshots and immediately after I saw the man laid on the ground. I did not see anybody else shooting. I am sure the U.N. soldiers are the ones who shot the demonstrator.”

According to Reuters, “Some (mourners interviewed after the funeral) accused the government of former Interim Prime Minister Gerard Latortue (who took office – without benefit of an election – following the coup) of causing Jean-Juste’s death by imprisoning him in 2005 on charges that later proved false. Jean-Juste became ill with leukemia while in prison. …

“Many demonstrators accused the former Latortue government of jailing Jean-Juste in 2005 to prevent him from running for president.

“‘Latortue and his government should be tried for Jean-Juste’s death,’ said Maurice Legrand, a 37-year-old demonstrator. ‘When you jail somebody for political reasons and you prevent him from getting medical care, you are a criminal.’ …

“Latortue had repeatedly refused to release Jean-Juste to allow him to receive medical care in the United States, despite an independent diagnosis of leukemia and other complications. 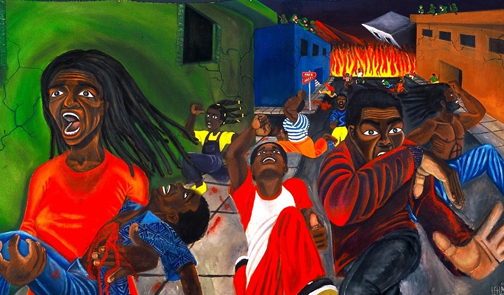 “Jean-Juste was released in January 2006 under intense international pressure, including from a number of U.S. Congress members, and went to Florida for treatment. Many of his supporters believed he could have better coped with the disease if he had received treatment earlier.”

Tensions can only continue to escalate with runoff elections for 11 senatorial seats coming Sunday that the Fanmi Lavalas party, which represents at least 70 percent of Haitians, is boycotting as it did the first round on April 19, when turnout was only about 3 percent, Lavalas candidates not having been allowed to run. The thousands of mourners at today’s funeral were again demanding the return of the leader of Lavalas, the democratically elected President Jean Bertrand Aristide, living in exile in South Africa since he was kidnapped by U.S. Marines during the coup d’etat of Feb. 29, 2004.

Protests led by medical students for the past month are making several demands, including an increase in the minimum wage and the removal of the 9,000 U.N. troops that have remained in Haiti since the coup. “On Wednesday, student protesters attacked and burned a U.N. police vehicle,” the Associated Press reports.

The U.N.’s trigger happy occupation force in Haiti does the bidding of the U.S. Because President Barack Obama is defending dissent in Iran, to be consistent he must also condemn the shooting of peaceful, unarmed protesters in Haiti – outside the largest church in the country at the funeral of the priest who would have been Haiti’s president if he had not been jailed. 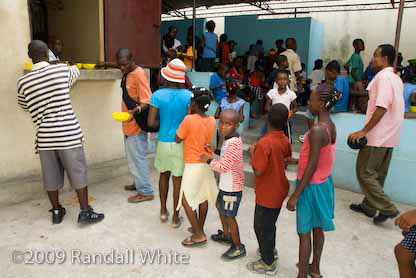 And Secretary of State Hillary Clinton and her husband Bill, now the U.N. special envoy to Haiti, must seek more than opportunities for U.S. corporations to exploit Haiti’s “cheap” labor.

Tell them how you feel about the apparent attack by U.N. “peacekeepers” on mourners at the funeral of Father Jean-Juste, called by some commentators the Martin Luther King of Haiti. Tell them whether you agree with most Haitians that it’s long past time for the U.N. occupation force to leave Haiti.

The Haiti Action Committee reports that “the work of feeding up to 3,000 every day continues at St. Claire. (As pastor of St. Claire, a church in Port au Prince,) Father Jean Juste organized and built the feeding program with financial assistance provided by the What If? Foundation, a non-profit that can take tax-deductible donations to continue one part of his ministry.” Support for this work is an excellent way to honor the memory of the saintly priest.

Human rights lawyer Marguerite Laurent – or Ezili Dantò – is dedicated to correcting the media lies and colonial narratives about Haiti. A writer, performance poet and lawyer, Ezili Dantò is founder and president of the Haitian Lawyers Leadership Network (HLLN), runs the Ezili Dantò website, listserve, eyewitness project, FreeHaitiMovement and the on-line journal, “Haitian Perspectives.” Reach her by email at erzilidanto@yahoo.com or online at www.ezilidanto.com. Bay View staff contributed to this story. Another story by Ezili, “Mourners at Father Gerard Jean-Juste’s funeral accuse Catholic church, Haitian leaders of complicity in his death,” provides essential background for this one.

Venezuela: a threat to Washington?

Why Bernard Gousse should not be Haiti’s next prime minister