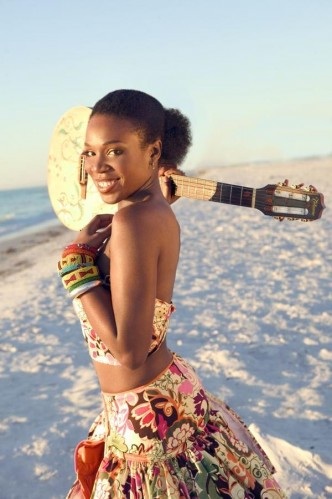 One of the definite queens of soul music, folk guitarists and amazing song writers of our time is India.Arie. She has been nominated numerous times for Grammys, but more importantly she has been one of the symbols, within this decade, of dark skinned talented Black women musicians rising to prominence. Mainstream media in America, since its inception, has been about destroying the image of African people.

Our ancestors were enslaved here. In order to psychologically justify the genocide and enslaving of a race of people, the white supremacist powers that built the media in this country as we know it today dehumanized us in it. They continue to dehumanize us, and at the same time the beauty of the songs of India.Arie and the image of a beautiful dark skinned Black woman making these songs is a weapon against this dehumanization. It shows that we don’t just believe the hype, which is shown with India’s popularity in pop music, but also in the Black ghettos of America.

Even beyond her beauty, her songs are timelessly written, eloquently played and poetically sung. She is one of the most original musicians in the arena of international music from America. Now read India.Arie in her own words …

M.O.I. JR: You have an empowering image as a dark skinned Black woman who has made it to astronomical status in Hollywood that is controlled by a white image, and a white looking image even among Black people. Is that something you set out to do or is that a barrier that you have been breaking through your whole life?

India.Arie: I think that we are all made exactly how we were meant to look – our height and our voices and our eye color and our parents and everything. I think our sexual orientation, whatever it is … I think that we’re all made the way we are meant to be made to meet our challenges and our goals in life. And for me, I can’t control being dark. So I’m a singer. I am out here.

I’m expressing myself, talking about the things that matter to me. I’m a dark skinned woman like you said, a Black woman who is very ethnic, very expressive and very political. And all of that. And I am just being me. So if I’m breaking any barriers or anything, I feel like that’s God or something my soulmate had asked for before I got here, or whatever.

I’m just being me, but I think that it is a blessing to be able to be me and speak for people who see themselves in me and be able to do like you said. I don’t know if I reached astronomical heights, but I have had a lot of success, and a lot more based on what it would seem based on what I sing about and how I look and what I do or don’t do and the lack of drama and the lack of all of that stuff surrounding my career.

So it’s working. Really, I’m just being me, and any political statement that is made by that is kind of like God (laughing). It’s cool to me. It’s a fun life.

India.Arie: Yeah, those two are definitely inspirations for me. I also love Stevie Wonder for the same reason. His music sounds great to the ear, but what I love about him, his music feels good to the heart. It’s like it makes you feel good. And for me, I didn’t want to sound like Stevie Wonder but I wanted to create the kind of energy that his music creates. So he’s an inspiration to me.

Bill Withers is an inspiration to me, as someone who speaks about the Black American experience. Those are folk songs. I love Bill Withers for that reason. I love Bonnie Raitt. I love women who play guitar. I love women with raspy voices. I love women who play instruments. I love Oleta Adams, Anita Baker and Lalah Hathaway. I love Lizz Wright. I love a lot of new stuff. I love Amos Lee, like I said Lizz Wright, and of course my friend Anthony David. I like a lot of stuff. I think that the common thread that is carried through the music that I like is not really a genre or a sound, but it’s a feeling that certain music carries.

India.Arie: I have a mission statement that I say to myself. I also say it to my audience. And I say it as setting an intention for the moment – or for the song or for the dress that I’m going to wear or for the song that I’m going to write. I always use it as a barometer to check with myself to make sure that I am on the right path. And my mission statement is to spread love, healing and peace through the power of words and music. I hope people feel that.

And I also pray that, however these songs are meant to touch whoever they are meant to touch, that they will do so. That’s my other prayer. I don’t know what people need or what a person might need in a certain moment or whatever, but I do believe in prayer. I believe that the intention that I’m sending forth is honorable, and I think that God honors that. And I think that I just want people to be touched in whatever way it is that they need, but I do not want to push my music on anybody. It’s not about that, but whoever feels my music, whoever likes what I am doing or what is coming through me, that they will be able to receive from it whatever it is that they need to receive, because I write all of the songs about myself. Somehow people see themselves in it. I can’t do that, but I think that God does.

M.O.I. JR: How did you start playing music?

M.O.I. JR: It’s in the DNA. So when did you decide that this could be a full-time profession for you?

India.Arie: After I wrote my first three songs. I played them at a coffee shop and got a standing ovation and I thought, I wanna do this (smiling). And that was 12 years ago.

India.Arie: No, it was in Savannah Georgia, which is four hours south of Atlanta. I was in college.

India.Arie: I was born in Colorado, raised there ‘til I was 13. I also graduated from high school in Colorado, and we moved to Atlanta. So I was between Atlanta and Colorado since the age of 12, and mostly Atlanta at this point.

M.O.I. JR: Who are your political inspirations? I know that you have a lot to say in your music. Who are some of the people who inspire you politically, spiritually, in a non-music fashion?

India.Arie: I really love Iyanna Vanzant … Susan Taylor, the former editor of Essence Magazine … Oprah … There’s a Turkish singer; her name is Sezen Aksu. She is on the last song on my album, “Testimony Volume 2.” That’s the Turkish singer that you hear. She has been very influential to me politically. Who else? Shirley Chisolm is like one of my heroes. I think that that is a good list. I could keep thinking of people, but off the cuff those are the people that come to mind. Alice Walker, Toni Morrison.

M.O.I. JR: How much would you say you tour a year, because you talk about you like being in the Bay Area. I don’t feel like you come out here enough. I’ve never been able to catch an India.Arie show in the Bay. I caught you in D.C. but not in the Bay. How much do you tour actually?

India.Arie: I don’t tour that much. I tour a lot for my own personal taste, but I don’t tour a lot compared to what other artists do. There are times when I take whole years off or two years at a time off. But I have been in the Bay. I was there in late April. That was actually my first show back after a two-year hiatus. It was in San Francisco. And I’m not around as much as a lot of other artists because I spend a lot of time writing – and writing things other than songs. I spend a lot of time at home and doing other things that I like and parts of my life other than my career but I’ve been in the Bay Area quite a bit.

I also did some radio promotion. I don’t know if you heard that. I did like six songs live on the radio in San Francisco. I did that outside thing at the park when it was real, real hot in 2006. You know, I’m around but you gotta keep your eyes open for my show.