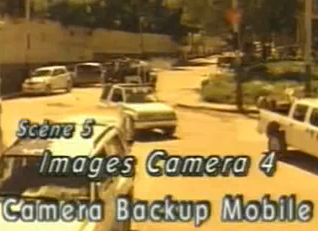 The footage obtained by HIP clearly shows two shots being fired by Brazilian troops from the back of a small pickup truck at crowd level. The first shot was fired in the direction of the front of Haiti’s national cathedral where one of the mourners was killed by a single shot to the head.

The U.N. has since claimed that they were not responsible and that their troops only fired warning shots into the air. They also claimed to have performed an autopsy on the victim and made the assertion that he had been “killed by a rock thrown by the crowd or hit with a blunt object.” Witnesses and journalists have countered that the U.N. is trying to cover up the incident.

This is not the first time U.N. troops in Haiti have been accused of killing innocent Haitians. On July 6, 2005, the U.N. launched a raid on the community of Cite Soleil, where residents accused them of committing a massacre.

U.N. shoots at mourners during funeral for Father Gerard Jean-Juste in Haiti, June 18, 2009

• Another Massacre in Haiti by U.N. Troops

This video, taken outside the Cathedral of Port-au-Prince immediately after the funeral for Father Gerard Jean-Juste, allows viewers to feel a part of the crowd. The videographer, identified on YouTube as haitianhearts, comments, “About one minute after I turned off the video, the shots rang out near the cathedral.”